“Obviously, MGM and T-Mobile will be big players with (the expansion team). I’m excited to see how the betting action will be on games.” - Jay Rood, MGM Resorts

It was hoped that the $375-million project, on 12 acres behind the New York-New York and Monte Carlo hotel casinos, would lead the city to the major leagues of professional sports. Based on a report from The Associated Press, that’s happening, in the form of Las Vegas being awarded an NHL expansion franchise to play at the recently completed T-Mobile Arena.

The AP cited a source with direct knowledge of the decision who said the league has settled on Las Vegas, with a second source terming it a “done deal.”

But this is Vegas, after all – the gambling capital of the world. So that leaves the bigger question out there: Will sports bettors be able to wager on the new team, which is expected to begin play in the 2017-18 season? Jay Rood, vice president of race and sports for MGM Resorts, thinks so.

“I would expect to book the games,” Rood told Covers shortly after the AP report was released. “Obviously, MGM and T-Mobile will be big players with (the expansion team). I’m excited to see how the betting action will be on games.”

Chris Andrews, director of the South Point sportsbook, couldn’t imagine the NHL not allowing wagering on the Las Vegas team.

“I’d be really disappointed if it was anything different than what we’re doing now,” Andrews said. “I expect it to be the same. I see no reason why it should be any different.”

Jason Simbal, vice president of risk management for CG Technology, said his company’s Las Vegas sportsbooks certainly want the expansion team’s games on the board. Right now, CG’s book at the Silverton doesn’t take NHL bets due to ownership conflicts at that property, but CG does book NHL at all its other shops.

“If it’s permitted by the state and the league, we’ll do it,” Simbal said.

Added Golden Nugget sportsbook director Tony Miller: “I know it comes down to the Gaming Control Board. I’m hoping it will have no effect on us taking wagers. A lot of people will come to town to see their team play, and I know those people will want to bet on their team.

“We take bets on UNLV. I don’t think there’s any reason not to have (a Las Vegas NHL team) on the board.”

Jay Kornegay, who runs the Las Vegas Superbook as vice president of race and sports for Westgate Las Vegas, echoed the sentiments of all his peers.

“I don’t think it’s going to be an issue. I think it might’ve been an issue a few years ago, but not now. The climate has changed,” Kornegay said. “I’m not in favor of taking games down, because it sends a message that there’s something wrong with it, when in fact there’s nothing wrong with it. We’ve been accepting bets on our college teams for 15 years.”

The betting question isn’t a new one, with Covers delving into it when MGM and AEG first broke ground. But around that time, attitudes on sports betting were already beginning to shift. In November 2014, NBA Commissioner Adam Silver even came out as a proponent of legalized, regulated sports betting. That lined up with what Rood told Covers for a May 2014 story on the new Vegas arena.

“If a league is willing to go in the direction of having a team in Las Vegas, that may indicate some changing views on sports betting,” Rood said then. “But on the other hand, they might say the benefit of having a team here would outweigh the betting aspect – betting could take a back seat to the larger picture.”

Assuming Rood’s assessment today is correct, though, and betting is allowed on the Vegas franchise, it will have a strong impact in the short term, at least.

“I think people that will go to the games, especially fans of teams from out of town, will say ‘Yeah, let’s have some money on the game,’” longtime Las Vegas handicapper Ken Thomson told Covers back in 2014.

Thomson based his assessment on what he’d seen at the Pac-12 men’s basketball tournament at the MGM Grand Garden.

“There were 12,000 people out there for the games. People were betting on those games, then going to the Grand Garden to watch those games. I think a pro team would only increase the handle.”

Thomson and Rood agreed at the time that the biggest betting impact in a city of primarily transplants will occur when a marquee road team comes to town. In the NHL’s case, for example, teams such as the Chicago Blackhawks, Pittsburgh Penguins, Los Angeles Kings and the Canadian squads – many hockey fans from Canada winter in Las Vegas – would be a big draw at the betting window.

“It may not impact every game, but for a lot of big games and teams that are reasonably relevant, the handle on those nights could definitely increase,” Thomson said, adding that an NHL team could be particularly beneficial. “It actually may help hockey handles, because hockey doesn’t do so much. It could really increase, having a lot more people betting on the home team.”

Said Rood: “I would imagine a team would generate probably quite a bit of interest in the early going and have a significant impact. It would be just like NASCAR when it comes here – it’s 10-fold the handle we take on a normal NASCAR weekend.

“Anytime you have a product you can bet on… that would become the phenomenon. Many fans in the stands would probably not even be fans of the hometown team, but rather fans of the visiting team.”

Over the past few months, there has been much talk of the Oakland Raiders moving to Las Vegas, taking up residence in a new $1.4 billion stadium proposed by Las Vegas Sands Corp. But getting an NHL franchise and luring a team from the massive entity that is the NFL are two entirely different beasts.

“I’m not sure if (the NHL coming here) will influence that,” Rood said.

Miller agreed, though if the Raiders’ move came to fruition as well, the Vegas floodgates would be fully open.

“I think it’s too early,” Miller said of whether the NHL decision is a precursor to a Raiders move. “We’d been working on hockey, (expected owner) Bill Foley had been on this for a couple years. I don’t think (the NFL) has anything to do with hockey. But I guarantee if we end up with an NHL team and an NFL team, I cannot think of any reason why we would not have an NBA team, as well.”

But first, the NHL needs to wrap this up. The expansion recommendation is expected to get the required two-thirds approval from current teams, with official word expected June 22 when the league’s Board of Governors meets in Las Vegas. At that point, again presuming betting is allowed, sportsbooks won’t have to be so speculative in that realm.

“I think the team’s games will draw better-than-average handle,” he said Tuesday morning. “This is great news.”

And not just for sports betting, as Simbal duly noted.

“I think it’s great for the city from every perspective,” he said. “From a business standpoint, you’ll have 15,000-plus people in that area of the Strip, 41 days out of the year, when normally they wouldn’t have been there, especially on weeknights. And it’s a pretty cool destination trip. I can’t see anything negative about this at all.

“I’m excited to see my Rangers play in Las Vegas.”

Come fall of 2017, Simbal and others in the industry will be even more excited to have patrons betting on – or against – the new hometown team. That’s what Kornegay is expecting.

“It hasn’t been a stumbling block to this point,” Kornegay said. “I think it’s in the best interest of everybody to have these games on the board, rather than off the board.” 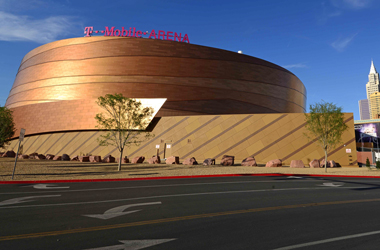