Rangers goalie Igor Shesterkin has been outstanding in recent weeks, posting a 1.99 GAA with a .939 save percentage over his previous six starts.

A pair of East Division foes meet up at Madison Square Garden on Tuesday night as the Pittsburgh Penguins battle the New York Rangers.

Oddsmakers are expecting a close game with NHL betting lines installing the Rangers as slim -125 favorites at home. Here are our best free NHL picks and predictions for the Penguins vs. Rangers on April 6, with the puck dropping at 7 p.m. ET.

The Rangers are 7-2 in their last nine games as a favorite, while the Penguins are 2-7 in their previous nine contests as a road underdog. Find more NHL betting trends for Penguins vs. Rangers.

The Penguins are coming off a 7-5 loss to the Boston Bruins, which snapped their five-game winning streak. The Blueshirts are fresh off a shootout loss to the Sabres after winning their previous game against Buffalo in overtime. Interestingly, they have split each of their previous six two-game sets, and the last time they lost both games in a series was against Pittsburgh back on March 7 and 9.

Penguins star center Evgeni Malkin was recently placed on the IR, and he's not their only forward out of action with four of their top nine scorers sidelined with injuries. The Rangers are much healthier at the moment with only defenseman Jack Johnson injured, and as Penguins fans will tell you, New York's defense might actually be better without him.

The Pens are in third place in the East Division with a 24-12-2 record, while the Rangers are in sixth place with a 17-15-5 mark. However, analytics suggest that the gap between the two teams is much smaller.

That latter statistic could prove vital with the Blueshirts having a clear-cut advantage on the blue line and in nets. Sophomore goalie Igor Shesterkin is continuing his strong play from his rookie year, going 9-8-2 with a sparkling 2.27 GAA and a save percentage of .925 this season.

With injuries disrupting Pittsburgh up front and the Rangers rocking a red-hot goalie, back the home side as slim favorites.

Pittsburgh goalie Tristan Jarry missed a pair of games last week with an upper-body injury but had a full practice on Monday and said he's back to 100 percent. Although Jarry's 2.79 GAA and .910 save percentage this year aren't as impressive as Shesterkin's numbers, his play has improved recently. He has a 2.05 GAA with a save percentage of .936 over his last eight games.

Shesterkin has also been outstanding in recent weeks, posting a 1.99 GAA with a .939 save percentage over his previous six starts. The Rangers are also 12-5 to the Under in Shesterkin's previous 17 starts between the pipes.

The Pens have cashed the Under in nine of their last 12 games and now face a Rangers squad that's coming off a pair of contests where only four total goals were scored in regulation.

While those two games came against the awful Sabres, the Rangers also have a tendency to play lower-scoring games against quality foes, going 7-3 to the Under in their last 10 games against teams with a winning percentage above .600. Take the Under. 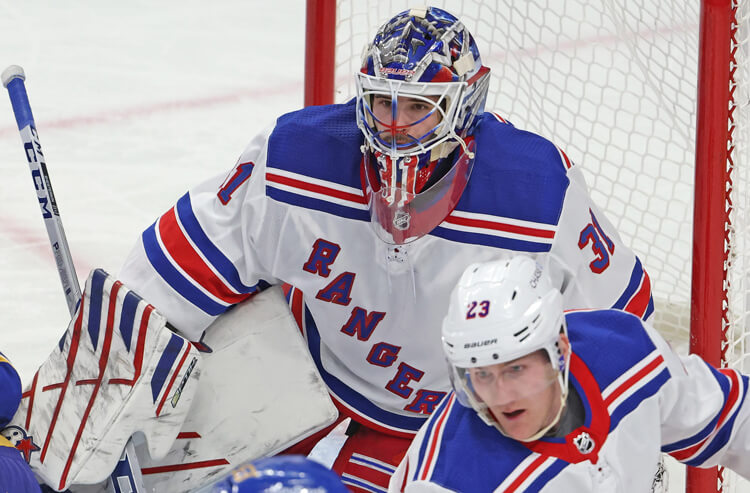 Penguins vs Rangers Picks: Rangers Clogging the Pipes
Provided by

Golden Knights vs Avalanche Picks and Predictions: Which West Powerhouse Snaps Out of It?
Josh Inglis | Oct 26, 2021