The Montreal Canadiens will have a quick chance at revenge, playing the Maple Leafs on Saturday after falling to Toronto on Thursday.

In what could be a first round matchup, the Montreal Canadiens take on the Toronto Maple Leafs on Saturday for their 10th and final meeting of the regular season. The two familiar foes skated to a 5-2 Toronto win on Thursday, which pushed the Maple Leafs’ record to 6-3 SU against the Canadiens in 2021.

Oddsmakers have the Leafs as a heavy -200 favorite in NHL betting with the total opening at 5.5.

Here are our free picks and predictions for Canadiens vs. Maple Leafs on Saturday, May 8 (7:00 p.m. ET).

The Under is 3-1-1 in the last five meetings. Find more NHL betting trends for Canadiens vs. Maple Leafs.

The Leafs dominated Thursday’s matchup and chased rookie goalie Cayden Primeau after a 4-0 first period. However, the Habs were playing their fourth game in six nights and played in Ottawa before traveling to Toronto the day before. Toronto was also waiting for Montreal, as it had a full two days off before the 5-2 showing.

No one is debating that the Leafs aren’t the better team and their 13 out of possible 14 points over their last seven games shows they're in better form, but Montreal may have more to play for Saturday night.

The Habs all but secured a spot in the postseason and can still finish as high as third — ahead of the plummeting Jets. Toronto, on the other hand, has locked up the division’s top spot and is going to make sure everyone is healthy heading into the playoffs. The Leafs will also be doing some creative lineup juggling as the team tries to circumvent the salary cap.

Finishing in fourth means a date with the Leafs, who Montreal doesn’t match up well against. A third place finish would mean facing the Oilers, who Montreal has had success against this year at 5-2 SU. With Toronto locked into the No. 1 seed, it will not rush back the wounded and will likely give some young defenseman more time.

Rasmus Sandin is due to sit because of salary cap reasons and will be replaced by Ben Hutton, who was acquired from Anaheim and is possibly the organization's ninth-best defenseman.

We’d expect Montreal to start the game with more energy after getting slightly embarrassed Thursday, allowing four first-period goals and watching its rookie goalie struggle. Jake Allen will likely start and has held his own against the Buds with a 2-2 SU record to go along with a 2.56 GAA and a .911 save percentage — both better than his season averages.

With Montreal’s price tag at a robust +170, this looks like a great spot to hammer the visitors in primetime.

Both clubs will likely finish the season as profitable Under teams. They hit Over 5.5 Thursday night but still needed a 5-on-5 goal late in the third to cash, even after a four-goal first frame. This line opened at 5.5 (-125) but has moved to 6 on a few books as of Friday night. If you like the Over get it quick, but we're eying the Under 6.

We love a good Under after a team gets beaten up. The Leafs spanked the Canadiens in nearly every aspect on Thursday and finished with 4.55 expected goals, which is no easy task. The Habs were riding a rough schedule and have had a full day of rest without travel heading into Saturday’s showdown.

Both power plays threw up donuts two days ago, with zero PP goals scored on seven combined chances. Despite the talent, the Leafs just can’t score with the man advantage. After starting the season with the best PP unit, Toronto owns the 27th ranked power play since March 1 — that’s a stretch of 17 games.

Montreal has scored more than three goals just three times across its last 20 games, as its inept offense has been a disappointment for the majority of the season. The addition of rookie Cole Caufield is promising, but with a lack of secondary scoring, a defensive-minded Leafs team (seventh-best goals allowed per game) should continue to keep the Montreal offense at bay.

Over the last five meetings, the Canadiens have scored more than two regulation goals just once and only two times over the previous eight meetings. Scoring has not been Montreal’s forte this year.

Jack Campbell should get the nod on Saturday night. Over his five starts against Montreal this season, the new No. 1 tendy is 3-1-1 with a stellar 2.19 GAA and a .919 save percentage. Campbell has surrendered more than two goals just once over his last five starts and is a big reason why the Buds are still in first after losing Frederik Andersen in mid-March.

This Under might have a better price tag closer to puck drop with the public’s love for hitting Toronto Overs, but we can't say no to the Under 6. 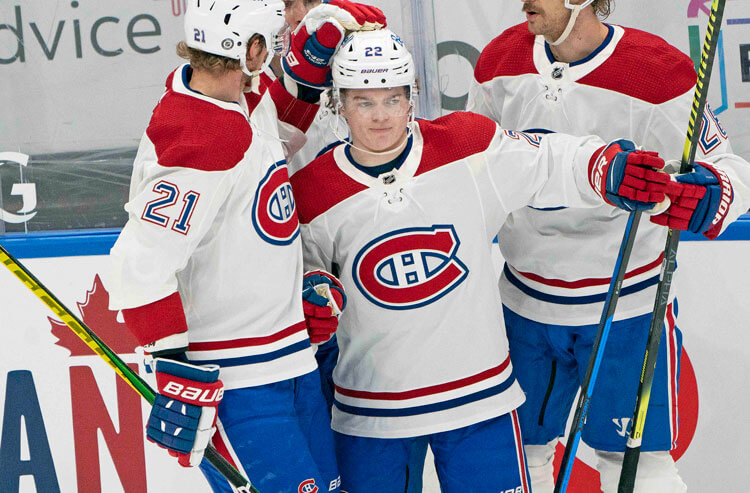 Canadiens vs Maple Leafs Picks: Quick Revenge for the Habs?
Provided by