Boston rookie goaltender Jeremy Swayman has been excellent in his first NHL season, going 7-2 with a 1.44 goals-against average and a .946 save percentage.

In what will be a preview of their first-round matchup, the Boston Bruins — on the tail end of a back-to-back — travel to Washington to take on the Capitals in what will be the final regular-season game for both clubs.

With Washington in the No. 2 seed and Boston locked into the third spot, Tuesday’s night match will have no impact on the standings and we could see both sides sit some important players ahead of Round 1 of the playoffs.

Oddsmakers have different opinions on this game as some books have opened it at +100 for the Bruins, others have the visitors as -120 NHL betting favorites, and many have it as a pick'em. The total opened at 6 at some books, while others opened at 5.5.

Here are our free picks and predictions for Boston Bruins vs. Washington Capitals for Tuesday, May 11 (7:00 p.m. ET).

With Boston backing off tonight, this price made a huge move from Washington -112 all the way to -180, where the moneyline stands at 3:30 p.m. ET. "The line steamed off news that the Bruins were resting a majority of their key players," TwinSpires trading analyst Zachary Lucas said, noting the Capitals are taking 88 percent of tickets and 90 percent of money. "It's been all Capitals money so far, with no signs of slowing down." The total of 5.5 is seeing 78 percent of bets/75 percent of cash on the Under.

The Bruins are 6-1 SU in their last seven games following a win. Find more NHL betting trends for Bruins vs. Capitals.

The Boston Bruins will be on the back end of a traveling back-to-back but facing a Washington team that has a laundry list of injuries could make things much easier on Tuesday.

With the Penguins wrapping up first place and the Capitals locked into second, the chance of Washington’s star players suiting up is not great. Even if Boston wins the game and ties the Capitals in the standings, Washington will win the tiebreaker as it has more regulation wins.

Boston was fighting for a playoff spot back in early April, but a few moves at the deadline — including acquiring former Hart winner Taylor Hall — has turned the Bruins into hockey’s best team over the last four weeks at 11-2-1 heading into Monday night. Hall buried a pair of goals, including the OT winner, last night against the Islanders and now has 14 points in his 16 games with the Bruins.

Over this stretch of dominating hockey, the Bruins’ offense has awoken and is scoring 3.56 goals per game, which is in stark contrast to their pre-trade deadline mark of 2.61. It’s not just the offense that is winning them games, Boston is holding teams to 1.86 goals per game since the deadline—is the lowest number in the league.

With Tuukka Rask getting the nod last night, the Bruins have confirmed Jeremy Swayman will start against a Caps team that could be missing five of its six best forwards.

All the rookie starter has done since coming up last month is go 7-2 SU with a 1.44 goals-against average and a .946 save percentage. He doesn’t qualify, having played too few games, but his peripherals would easily rank him at the top of the league. The numbers are unsustainable but we aren’t betting against the rookie who also posted an 8-1 record with a 1.89 GAA and a .933 save percentage in the AHL before being called up.

The Capitals seem fine with resting their big names in order to stay fresh for a deep playoff push. It wouldn’t surprise us if Washington coach Peter Laviolette sat all his big guns as a handful of other teams have done the same—including the Hurricanes and Predators last night.

We’re getting a bit of a discount with the Bruins on the backend and we’re happy to take the B’s against a possible skeleton crew in Washington.

The Bruins are coming off a 3-2 overtime win against the Islanders last night that saw the total close at 5. That push moved them to 7-7-2 O/U over their last 16. However, none of those games had a total higher than 5.5 and the Bruins haven’t seen a 6 since March 5.

We have highlighted the possibility of the Capitals sitting their best skaters, but with Boston locked into the No. 3 seed, it wouldn’t surprise us if Bruce Cassidy sat his most important weapons as well. This game will also be a precursor to what will likely be a hard-fought and extended first-round playoff series, meaning a tighter style of hockey should be expected.

On the season, the matchup has yielded plenty of goals with at least six goals being scored in six of the seven meetings. Just in the last two meetings alone, 18 total goals were scored. Neither coach will want this trend to continue with the postseason around the corner.

We don’t usually hit the Under on the Capitals who are 31-21 O/U in 2021, but in what is basically a throw-away game that could be filled with fresh-legged substitutes who are looking to impress to crack a playoff roster, we don’t see this one getting out of control. 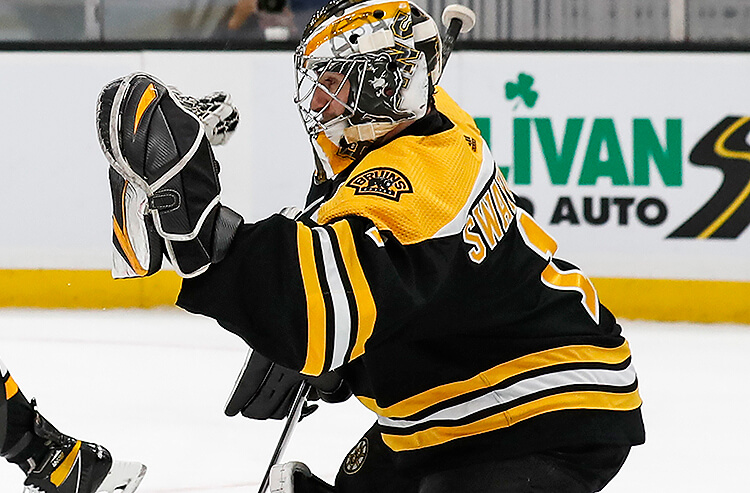