Colorado has won eight of 10 and has only lost once in regulation over their last 17 games. Tonight, they're up against a Ducks team who are limited on offense, defense, and between the pipes — making the Avs the easy team to back in today's NHL preview.

The Colorado Avalanche will bring their league-leading offense into California as they visit the Anaheim Ducks who have just two wins in their last 10 games. The Avs are still the betting favorite to win the Stanley Cup at +475 and have just one regulation loss in their last 17 games.

Can the Colorado offense keep rolling against one of the better home Under teams in Anaheim? Can the Ducks pull out of this slide even if their lineup is decimated with COVID? Find out in our free picks, predictions and NHL odds for Avalanche vs. Ducks.

The Avs opened as -250 favorites on the moneyline and have moved slightly to -255. If John Gibson can’t go (COVID), Lukas Dostal would draw the start as Anthony Stolarz is on COVID protocol as well. The total sits at 6 and 6.5 depending on where you look. Colorado closed as -290 home favorites vs. the Ducks back on January 2.

USA: Nathan MacKinnon to score a goal + Avalanche to win BOOSTED to +225 (was +195) at PointsBet! Claim Now

Canada: Avalanche to win + Over 6.5 total goals + Mikko Rantanen to score a goal boosted to +400 at Betway! Claim Now

Avalanche vs Ducks head-to-head record (since 2020)

The Over is 8-1-2 in the Avalanche’s last 11 vs. the Pacific. Find more NHL betting trends for Avalanche vs. Ducks.

Avalanche vs Ducks picks and predictions

The Avs will hit the road for a brief two-game road trip but likely won’t have the services of No. 1 goalie Darcy Kuemper who left Monday’s game versus the Wild with an upper-body injury. Backup Pavel Francouz played well in relief and picked up the shootout win. Francouz has made three starts this season and is 2-1 SU but has given up 10 total goals. Being backed by the league’s best offense should help him in this situation but facing a Ducks team that is crippled with COVID and could be down a handful of key players if they don’t pass protocols today also will help Francouz's chances at a victory.

First off, John Gibson has been taken off the COVID list but due to his lengthy time with the illness, head coach Dallas Eakins isn’t sure if Gibson is physically ready to play tonight. If Gibby can’t suit up, Lukas Dostal will draw another start with Anthony Stolarz out as well.

Dostal has three NHL games to his name (two starts) and has fared well allowing just five goals versus the Red Wings and Blackhawks. But those are two of the lowest-scoring teams in hockey and the Avalanche are an entirely different beast.

Colorado is averaging 4.33 goals per game since Christmas, has a power play that might be the most lethal in hockey and will face an Anaheim team that is short defenders and top-six forwards.

COVID has hit the Ducks hard as defensemen Josh Manson and Cam Fowler are questionable. Manson was just placed on the COVID list so he is likely out.  Manson is second on the team in hits and third in ice time. The leader in ice time, Fowler, is also highly questionable and was put into COVID protocol on Saturday.

It’s not just the Anaheim blueline that is dealing with absences. Leading scorer Troy Terry is also a giant question mark, as well as Sonny Milano. Terry has been out for two games and the Ducks have managed just three goals in his absence. They were shut out versus the Blackhawks Saturday without both Terry and Milano in the lineup.

Things are not looking good for the Ducks. They’ve dropped eight of their last 10 games and have just two regulation wins in their last 14 contests. They're slipping in the standings, are extremely shorthanded, and play arguably the best team in hockey who come in relatively healthy up front. Colorado won 4-2 in the last meeting but the Ducks were much healthier then.

Sending your rookie goalie to face this Avs’ offense could spell disaster for the home side and we’re happy to take the visitors on the puck line here. The change from Fancouz to Kuemper isn't much of a downgrade if one at all.

This total would easily be at 6.5 across the board if it weren’t for the important offensive absences of the Ducks. Possibly without Terry, Milano and Fowler, Anaheim could be without three of their top-six point-getters. Those three have accounted for 30% of the team’s goals this season. It’s a good thing for the Ducks, the Avalanche don’t mind doing the majority of the scoring.

The top line of Colorado has possibly been the best in hockey as the trio of Gabriel Landeskog, Nathan MacKinnon and Mikko Rantanen have 123 total points across Colorado’s 36 games. Cale Makar leads all defensemen in goals with 16 and second-line center Nazem Kadri actually leads the team in points with 49.

The poor play in net has helped the Avalanche become the best Over team in hockey with a 25-7-4 O/U mark on the season. They lead the league in goals per game on the road at 3.88, face an Anaheim team that's thin on the blueline and is choosing between a goalie with two NHL starts to his name or one coming off a lengthy COVID infection.

Francouz has seen the Over hit in all five of the games he has played this season. They've all come within the last 35 days as no goalie has looked impressive between the pipes for the Avs this year. They sit second in expected goals against at 5-on-5 but allow the fifth-most goals per game on the road at 3.76.

Also aiding the Overs has been the Avs’ special teams. Colorado’s power play is a Top-10 unit in the league but the penalty kill has been atrocious and sits 28th in the league on the season.

Even with the lack of scoring talent up front for the Ducks, we’re happy to take this Over 6 with the juice and think this is the only thing stopping it from hitting 6.5 everywhere. There is a chance that Terry and Milano suit up tonight but we think Colorado could flirt with six goals themselves.

Not all books offer the same props which is why having multiple books is a great thing. PointsBet is one of the few major books that offers “to score in each period” prop which is a great derivative market when betting one-sided games with high totals. These bets are always plus money and add a new level of excitement to wagering as we’re cheering for each period.

The Avalanche are paying +140 to score in every period which is a fantastic price considering their Over 3.5 team total is -175. The Avs are pretty consistent with their period scoring as they rank second in first-period goals, third in second-period goals and first in third-period goals. Manson is a big loss for the Ducks and if Fowler can’t suit up, it will be even worse. The Colorado team total of 4.5 is too high so scoring in every period is a great pivot. We also like Colorado first period team total Over 1.5 for +200 which is more widely available.

Pick: Avalanche to score in every period (+140) 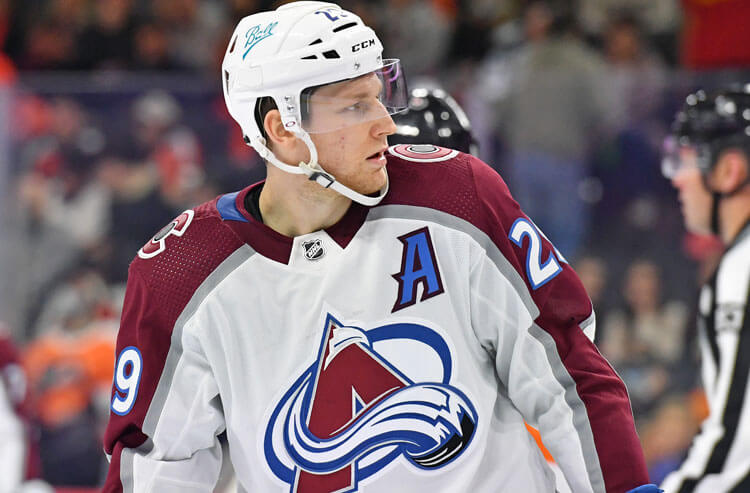 Avalanche vs Ducks Picks and Predictions: Limited Ducks No Match For Avs' League-Best Offense
Provided by

Blues vs Avalanche Game 1 Picks and Predictions: St. Louis Has Mountainous Challenge Ahead
John Reger | May 17, 2022
About Us
Contact Us
Careers
Our Team
Brand
Testimonials