There's only one game left on the Wild Card weekend schedule, but there's still a TD prop worth targeting. Cardinals running back Chase Edmonds is in a great spot to find paydirt, especially if James Conner misses Monday. Read on for our touchdown props. 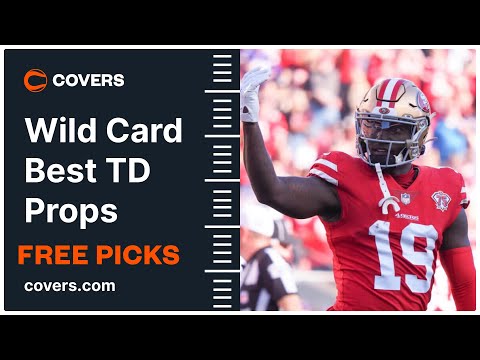 The touchdown market has become one of the most popular and potentially profitable props in the NFL betting world. Each week, we’re going to throw down three to four units as we try to uncover some of the best weekly NFL TD props and dig into the matchups that surround them.

The Super Wild Card round is here and we’re littering the board, including games on Saturday, Sunday and Monday. We’re riding a pair of TD favorites, getting creative with the Pittsburgh backfield, and sprinkling something on a slot receiver in Buffalo.

Leading things off, we’re getting straightforward with a player who has nine touchdowns in his last eight games and has hit pay dirt in all but one of those contests. Deebo Samuel may be the most important player on the San Francisco 49ers, and his role in the passing and rushing game backs up our claim.

Samuel had another huge game versus the Rams last week with 140 total yards and score. He has seven rushing TDs over his last eight games, and even with Elijah Mitchell back in the lineup, Samuel still saw eight carries last week, which he turned into 45 rushing yards — a five-week high. With everything on the line again Sunday night and Pro Football Focus’ No. 1 tackle Trent Williams likely drawing back in, there is no reason not to go back to Deebo again this week.

Kyle Shanahan has done an impressive job at getting the ball in Deebo’s hands, and when the 49ers get inside the 20, his role is even more prevalent, as he leads the entire team in red-zone touches/targets and has 10 over the last four weeks.

His TD price has dropped 30 points from last week and we doubt we’d take it at anything below even money, but in an indoor game with the highest total on the board, Samuel is our favorite TD play in this contest and is a threat to score in any type of game script. At +120, we’re throwing down 1.25 to win 1.5 units.

The Arizona offense has been sputtering without DeAndre Hopkins, as the Cardinals are averaging 20.75 points per game since Week 15 and just 5.3 yards per play. They could be without running back James Conner, who is very questionable for the Monday night game. Conner leads the team in rushing TDs and gets the bulk of the goal-line work. He’s been dealing with multiple injuries over the last six weeks, and in the two games that he's missed in Week 16 and 17, Chase Edmonds totaled 49 touches for 220 yards and a score.

Edmonds is more of a between-the-20s runner but gets the red-zone touches when Conner is out. Edmonds had all nine RB red-zone carries in Weeks 15 and 16 and ran for 120 yards on just 10 carries versus the Rams back in their first meeting.

An Edmonds TD can be had at +220, which would likely fall to +100 or +120 if Conner is ruled out with his rib injury. A lot can change between now and Monday night, but the worst-case scenario is us holding a +200 Edmonds ticket while he gets the majority of snaps with a less-than-100 percent James Conner in the lineup.

Edmonds runs to a 5.1 yards-per-carry mark (Top-10 mark), 10.1 yards per catch (Top-3 mark amongst running backs), and is the most explosive player on this offense. Getting in a limited practice on Thursday indicates he’ll be ready to go for Monday night. This is a one-unit play for us.

It’s not often you can get a backup running back at +1,700, especially when the starter hasn’t practiced as of Friday. Najee Harris is dealing with an elbow injury that kept him out of action for roughly two quarters last week, with Benny Snell receiving the majority of the carries in his absence. Harris had to wear a sleeve that limited the movement, but the rest this week at practice could just be maintenance. It could also be a bigger issue than most believe, as Harris looked to be in some serious pain when the injury occurred.

This injury is giving us a unique situation to hit both of these running backs’ TD markets, which could play out in a few different ways with possible big returns at a 1.5-unit risk. Whoever is the starter on Sunday night will get a heavy workload, as Mike Tomlin never seems to abandon the run.

Harris saw 19 carries in the 36-10 defeat to the Chiefs back in Week 16 despite trailing by 30 points at one point. Teams can run against this Chiefs’ defense, as it sits 31st in success rate against the run and is allowing 5.3 yards per carry over the last three weeks, which is also a Bottom-3 mark.

Risking 1.5 units on a pair of running backs who are 13-point underdogs on the road may seem dangerous, but this is a Pittsburgh team that does not abandon the run and could keep this game close if the defense goes off. Snell’s +1,700 TD price will plummet and was as low as +300 during last week’s game when Harris had exited. We’re trying to get ahead of the Friday practice report, and if Najee gets in a full practice, we’re still sitting on a Harris +140 ticket and looking to win one unit. If Harris doesn’t play, our 1.1u on the Harris TD will be voided and we’ll be holding a very +EV Snell TD at +1,700. It’s Harris for 1.1 units and Snell for 0.4 units.

While all the other books have Buffalo receiver Isaiah McKenzie around +500 to score a touchdown, bet365 is going rogue with a +1,000 price tag. We understand the reasoning behind the high odds, as McKenzie plays primarily out of the slot, and with Cole Beasley back, he’s losing snaps. However, since Beasley’s return, McKenzie has been getting the bulk of the work in the red zone and, more importantly, in goal-to-go situations.

McKenzie dominated the Patriots back in Week 16, catching 11 of his 12 targets for 125 yards and a score. This production won’t be replicated as Beasley was absent in that game, but given the track record of roasting slot corner Myles Bryant (PFF’s 90th ranked CB in coverage), McKenzie will surely have some opportunities Saturday night.

"The Bills favored McKenzie’s speed to spread the field in condensed areas and give the defense something else to think about with him in motion,” the Athletic's Joe Buscaglia was quoted after the Bills’ game versus the Falcons. He expects Buffalo to continue to use McKenzie in the red zone where his skillsets are more evident than Beasley’s.

We’d take this TD as low as +500 but getting it at +1,000 is robbery. There are a ton of mouths to feed in this Buffalo offense, but over the last three weeks, McKenzie’s six red-zone targets rank second on the team. His 4.42 speed is also the fastest among the Bills’ Top 5 pass-catchers. We’re sprinkling 0.35 units on this one.