We're looking at the best Week 15 bets to make — before Week 14 action has finished — and we've got our eyes on a team that already has double-digit wins laying too few points at home.

Don't get me wrong: I'm by no means a Kirk Cousins fan, nor do I truly believe the Minnesota Vikings are as good as their current 10-2 record indicates... but they are 10-2.

That's the second-best record in the NFL. Their two losses are to the Eagles and Cowboys — the second and fourth favorites on the current Super Bowl odds board — yet the look-ahead Week 15 odds have them laying a questionably low number of points at home against a very bad team.

The NFL odds can (and will) change, with Week 14 not having yet kicked off, but barring injuries I think there's real value in backing Minny next week against the Colts.

I think the Minnesota Vikings are getting disrespected for their Week 14 matchup against the Lions, currently sitting as 2-point road dogs against 5-7 Detroit, but that's an entirely different story as we're not focused on the near future... only the farther-near future.

This Saturday matinee, which is nine days away, has the Vikes not even laying six points against an absolutely putrid Indianapolis Colts team. Yes, Minnesota isn't as good as your typical 10-2 club, but they beat the Bills (in Buffalo), Patriots, and Jets — all teams prominently in the AFC playoff picture — over the last four weeks, and those teams are all significantly better than a Colts team that is limping towards the finish line.

The Vikings' most recent loss was a Week 11 drubbing to the Dallas Cowboys... but you know who else just got thrashed by Dallas? Yes, these Colts, who got dumped 54-19 last week to fall to 4-8-1 on the season and have now lost six of their last seven games.

Indy's offense is the real problem, sitting 25th in yards per game, 30th in points per game, and 31st in offensive Expected Points Added for the season while also leading the NFL in turnovers. Things have been even worse of late, as the Colts have reached the 20-point mark just once in this seven-game stretch (15.1 ppg) and just twice in their last 10 games.

The defense has also started to crumble, allowing 20+ points in four of its last five games, including a whopping 177.7 rushing yards per game over its last three — which has Dalvin Cook and the Vikings licking their chops.

It also (most puzzlingly) suggests they would be only 7 points worse than the Cowboys, who closed at -11 at home against these Colts last week (suggesting they are 9.5-10 points better on a neutral field) and just beat them by 35 — how can Indy take such a terrible L and then somehow have a better comparative outlook?

Minnesota is dealing with some injuries, but most of them are illness related (shouldn't be an issue in Week 15), and none are affecting the team's top skill-position players. There's also concern about a possible letdown as a Week 14 win would clinch the division... but Minnesota isn't going to let up, as it's just one game behind in the hunt for the first-round bye.

There's also the concern about the Colts being prepared coming out of their bye — but it's well documented that interim head coach Jeff Saturday lacks, well, head coaching experience, so it's very likely he doesn't maximize that week off as much as other coaches.

The Vikings are sitting below the key numbers of 6 and 7 (aka a TD with or without the extra point), and I don't see how this spread doesn't end up on the other side of one (or both) of those figures. If you think Minny is going to trample the Colts, grabbing them now at -5.5 will likely be the best line you see. 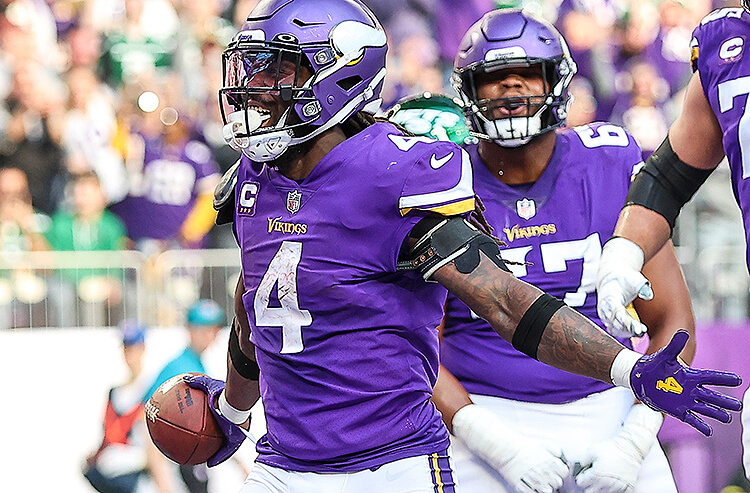