Texans vs Dolphins Week 12 Picks and Predictions: All Aboard the Tua Train

The scorching-hot Miami Dolphins should take advantage of a Texans team that has been a disaster on both sides of the ball and now turns to a backup quarterback for answers. Read more in our Texans vs. Dolphins betting picks.

The Houston Texans (1-8-1) didn't have high expectations heading into this season, but after five straight losses and just one win to their name through 11 weeks, they have decided to bench last year's third-round pick Davis Mills and will start journeyman backup Kyle Allen this Sunday.

To make things more difficult, they will draw the Miami Dolphins (7-3), who are winners of five straight and are undefeated this year in games that Tua Tagovailoa has played from start to finish. Miami will look to secure the expected win before they finish the regular season with a six-game gauntlet against five teams that are .500 or better.

Can Tua Tagovailoa build on an MVP-caliber campaign and secure the win at home, or will the change at quarterback for the Texans spark enough of a fire to keep the game competitive?

Find out in our free NFL picks and predictions for Texans vs. Dolphins on November 27.

Texans vs Dolphins picks and predictions

Up until this season, there wasn't much confidence behind Tua Tagovailoa. Whether it was his own front office trying to trade for Deshaun Watson last year or lure Tom Brady in this past offseason, the former fifth-overall pick seemingly couldn't do anything to get people to buy in.

That came despite a 13-8 record as a starter prior to this year, a mark he achieved despite the destructive handling by then-head coach Brian Flores, the absurdly strange co-offensive coordinator experiment, and being thrust into a starting role quickly after coming off of a major reconstructive hip surgery.

But things seemingly turned out for the best this offseason after the front office decided to put their eggs in his basket. The hiring of former 49ers offensive coordinator Mike McDaniel as head coach was a massive improvement over Flores. Talent-wise, the Dolphins also added world-beating wide receiver Tyreek Hill, as well as Pro Bowl left tackle Terron Armstead.

With competent structure and talent around him, Tua has become one of the league's best. The Dolphins are averaging 6.69 yards per play with Tua on the field, which would rank third all-time in the last 65 years. Hill has done wonders and currently leads the league in receptions (81), receiving yards (1148), and 20+ yard receptions (20).

That doesn't bode well for a Texans' defense that ranks fourth-worst by DVOA. They also rank 30th in yards allowed per drive but seemingly have had some favorable scoring variance as they rank just 20th in points allowed per drive.

Houston isn't much better on offense, ranking second-worst by DVOA overall. With that in mind, it's no surprise the Texans are among the worst five teams in the NFL in both yards and points scored per drive on offense.

The chances that switching from Davis Mills to journeyman backup Kyle Allen is going to do any good are low. If anything, it will just invite the Dolphins' defense to stack the box and lower breakout rookie running back Dameon Pierce's potential impact.

The number may be high, but it is certainly warranted and arguably still short.

The spread opened at Dolphins -11 and has moved to -14 at most books, with the majority of the move coming after the announcement of the benching of Mills.

The Dolphins are 7-0 in the games that Tua has played from start to finish. Their performance against the spread in those games has been almost as impressive, going 5-2 in that split (and 0-3 ATS in all other games).

The Texans are no strangers to being large underdogs. Teams have been favored by a touchdown or more five times already this season, and to their credit, Houston has gone 4-1 ATS in those games.

The total opened at 45.5 and moved to 47 over the course of the week, which is the second-highest mark for Sunday.

In that same seven-game "full Tua" split, Miami has gone 4-3 to the Over. That includes the three straight games they have cashed the Over, and they have done so by an average of 11.8 points during that span.

Houston has played 6-4 to the Under this season, and Sunday's total of 47 is the highest they've encountered this season thus far.

The Dolphins are 6-1 ATS in their last seven games following a bye week. Find more NFL betting trends for Texans vs. Dolphins. 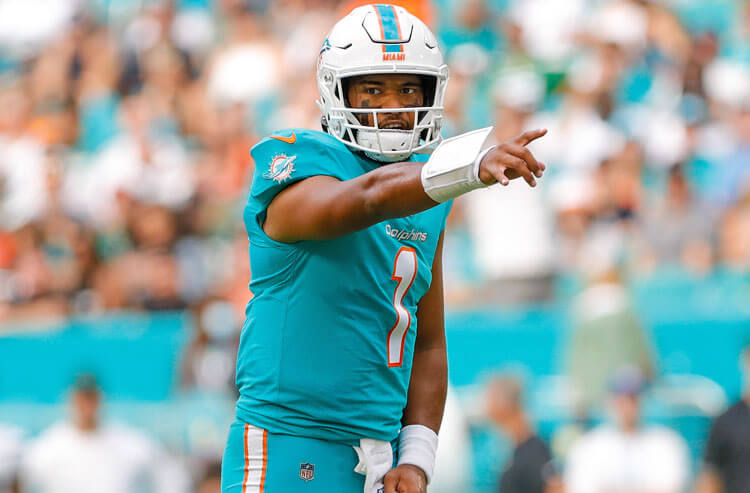 Texans vs Dolphins Week 12 Picks and Predictions: All Aboard the Tua Train
Provided by