Backing the Bungles? This isn't the Cincinnati team we've seen in years past, and in Week 6, they face a Lions unit that could be very close to losing its collective will. Find out more, including who to avoid, with our Week 6 NFL survivor picks.

It took a last-second 54-yard field goal and a thrilling overtime victory (after a 16-point fourth-quarter comeback) to finally get both of our NFL survivor pool picks to the finish line.

We knew things could get a little tight last week and Minnesota (safe) and Baltimore (savvy) caused a few grey hairs and a possible bout of IBS when it was all said and done. And for that, I apologize.

We build on that momentum as we hit the one-third mark of the season, giving our best Week 6 survivor pool picks. Just be sure to pick up some Just For Men and Pepto when you’re on your weekly beer run…

Just how much more heartbreak can the Lions take before packing it in? Detroit nearly spoiled our “safe” pick last Sunday, letting a win over Minnesota slip away on a walk-off field goal from the Vikings.

Detroit has remained competitive despite a 0-5 record and now takes on the Bengals, who could easily be 4-1 after an OT loss to Green Bay last Sunday. Quarterback Joe Burrow gave fans a scare with a throat injury but is expected to play this Sunday, taking that exciting aerial attack to the fast indoor track at Ford Field.

The Bengals have an implied win probability of 64.29 percent and are the Week 6 pick in just 2.4 percent of NFL survivor pools. Cincinnati also doesn’t feature on the holiday slates of Thanksgiving and Christmas Week, which are being graded as standalone schedules in pools like the Circa Survivor in Las Vegas.

Some people will look at Monday’s collapse to the Ravens as a failure, but the Colts get plenty of positives for that Week 5 effort.

Indianapolis has to be happy with the direction off the offense, which was behind schedule in the offseason due to a rash of injuries. The Colts managed 390 yards passing and 123 yards rushing while scoring 25 points in what was their third straight road game.

It’s a short turnaround in Week 6 but the Colts finally get back home for the first time since a 3-point loss to the Rams in Week 2 and welcome the Houston Texans, who are ripe for a letdown after an emotional last-second loss to New England at home last Sunday.

Indy owns an implied win percentage of 80.95 percent, which helps make the Colts the second-most popular pick of Week 6 behind the L.A. Rams, who we burned up with our Week 1 selection.

Here’s a look at the Top 5 favorites, in terms of moneyline odds and implied probability, for Week 6:

The Packers hit the road for their second straight game and the third time in the past four weeks, travelling to the Windy City to play the rival Bears. While Green Bay is 4-1 on the season, the Cheeseheads have been anything but dominant.

The Packers enter Week 6 with an implied win probability of 67.74 percent and are the pick of choice in 3.2 percent of NFL survivor pools – fifth-most popular. Chicago is 2-0 at home and coming off its most impressive win of the season so far, a 20-9 defensive showcase in Las Vegas last Sunday. 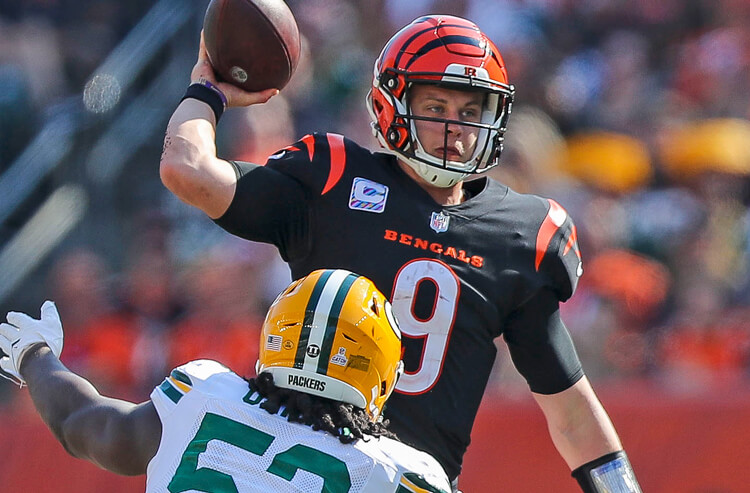 Jaguars vs Rams Week 13 Picks and Predictions: Rams Get Back to Business
Jason Logan | Nov 30, 2021