The Las Vegas Raiders were left for dead after losing their last home game to the awful Indianapolis Colts, but have since paid off as successful road dogs. Vegas is the underdog again in Week 13. See why we like the Raiders as they return home. 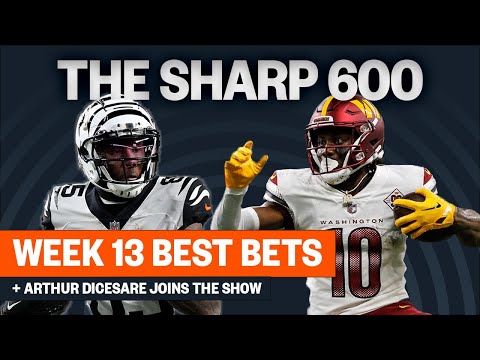 The schedule slides into December in Week 13, signaling winter for fans of betting NFL underdogs.

The first dozen weeks of NFL action have been pet friendly for the past 13 years, with underdogs covering at a 53.1% clip between Week 1 and Week 12. However, once we hit the final page of our calendar (are those still a thing?), those dogs dip to 49.4% winners for the rest of the regular season.

That swing in underdog success has been amplified in recent campaigns, with point spread pups covering at a 56.2% rate in the opening 12 weeks since 2019 but slumping to just 49.2% from Week 13 onward.

So why do NFL underdogs suddenly get neutered in December?

At this point in the season, the playoff picture is very much framed and teams that most often get tabbed as underdogs are more than likely not within those borders. The sharpest of professional sports bettors have a technical term for these types of teams: Shitty.

Shitty teams have mixed motivations in December, with some fighting to the finish while others are counting down the days until the offseason. That’s why short dogs — competitive dogs — have more bite in the home stretch, with underdogs of +3 or shorter covering at a near 52% rate from Week 13 forward since 2010.

While these trends shouldn’t stop you from playing a hefty underdog or fading a short pup, you should always keep them in mind — along with motivation — when taking the points in the home stretch of the season.

Here are my underdog NFL picks and predictions for Week 13.

NFL picks against the spread for Week 13

This line has bounced on and around pick’em across the market, with some shops hanging Steelers -1 and others at Falcons -1. I’ll take the single point with Pittsburgh, which is playing solid two-way football the past three games.

The defense has stepped it up with T.J. Watt back on the field, ranked out No. 8 in EPA per play over the past three contests while tallying seven sacks and six takeaways in that span. Atlanta has sputtered on offense the past month, boasting the 23rd-lowest EPA per play since Week 9.

The Falcons’ ground game is their bread and butter, handing off at the second-highest rate in the land, but pushes up against a Pittsburgh run stop that has budged for 3.1 yards per carry over the last three outings and has a defensive line that ranks out No. 7 in run stop at Football Outsiders.

As for the Steelers offense, rookie QB Kenny Pickett has looked sharper by the game and has done so against some sound defenses. Pickett posted a QBR of 84.5 in November vs. the likes of Indianapolis, Cincinnati, and New Orleans (all of which are Top 13 in Pass Defense DVOA) and now takes aim at an Atlanta stop unit near the basement in about every advanced defensive measurement.

Perhaps the most impactful improvement from this Pittsburgh offense is the ability to move the chains on third down. Heading into November, the Steelers were converting on only 33.64% (26th) of third-down snaps. That’s jumped to 50% in the last three contests and challenges a Falcons team bundled among the worst third-down defenses out there.

This spread opened as a pick’em and pro guys got down on the Jaguars, launching this line over the fence and as high as Lions +1.5. Detroit has been a popular pick with public bettors for the past year now, and Dan Campbell’s crew is warranting that love with its current form.

The Lions just took the fight to the second overall favorite on the Super Bowl board as double-digit dogs on Thanksgiving, giving Motown backers their fourth straight ATS winner and improving to 7-4 ATS on the season.

With this Week 13 total ticking up north of 50 points, Detroit is more than comfortable getting into a shootout against the Jaguars on their own turf. The Lions have scored 25 points or more in four of their last five games and own the seventh-highest EPA per play since Week 8, including No. 5 in EPA per dropback.

Detroit has plenty of playmakers on this offense and can deliver haymakers to a Jacksonville defense susceptible to home run plays, having allowed 55 passing plays of 20-plus yards already in 2022 (fourth most). The Jaguars stop unit sits 26th in Defensive DVOA and is even worse on the road (allowing just under an average of 25 points as a visitor), where it watches foes score inside the red zone at a near 74% clip.

Say what you want about Detroit, but it doesn’t often miss inside its opponent’s 20-yard line. The Lions crack the goal line on over 71% of RZ tries, including an 80% TD red-zone rate inside Ford Field.

As mentioned, the public is going to be playing the Lions again come Sunday, so I expect this line to come back down closer to PK on the weekend. I’m grabbing what I can on Wednesday and cheering with Joes in Week 13.

On a week in which you can find quality teams like the Titans, Bengals, and Dolphins as underdogs, I’m passing on those playoff contenders and siding up to the Silver and Black. I know, WTF?

Betting on the Raiders is not for the faint of heart. After face-planting against the Colts as 4.5-point home favorites, and seemingly striking rock bottom in Week 10, Las Vegas has squeaked out back-to-back overtime victories as a road underdog.

Allegiant Stadium is a sight for sore eyes, with Vegas playing at home only once in the past 35 days (that loss to Indy) while the Chargers are in the role of visitors for the second straight week and the fourth time in five games.

Vegas can poke all of L.A.’s soft spots in Week 13. The run game is rolling behind RB Josh Jacobs, who is expected to go light in practice all week while nursing a calf strain. He’s coming off an incredible 303-yard offensive effort (while playing on that bum leg) and faces a Los Angeles defense that couldn’t stop the runs with a bathtub full of Pepto Bismol.

The Raiders defense has been a gummy mess for most of the year, but the pass rush is beginning to give this group an identity. Las Vegas has only 16 total sacks on the season but six of those have come in the past two games, with guys like Maxx Crosby and Denzel Perryman turning up the heat.

Los Angeles’ offensive line continues its game of musical chairs with starters in and out of the lineup and could be down center Corey Linsley and RT Trey Pipkins III on Sunday. Quarterback Justin Herbert was sacked four times in the win over Arizona last weekend and has been sacked 12 total times in the past three weeks.

The ghosts of Week 18 linger in Las Vegas as well, as the Bolts’ last trip to Sin City didn’t quite turn out the way they wanted. Las Vegas is a tough out in the Death Star, owning an average margin of +4.0 at home (vs. -3.9 on the road), and is 10-6 ATS in divisional matchups since the Raiders moved to Sin City, including a 7-4 ATS count as a divisional dog (3-1 ATS divisional home dog).