The Vikings quarterback has a reputation for falling short under the bright lights of prime time — and our free NFL picks expect that trend to continue in a Thursday Night Football matchup against Bill Belichick's Patriots... on Thanksgiving.

As if having three football games on turkey day wasn't good enough for us all, we're getting to cap off the evening with the NFL equivalent of a solar eclipse. That rare, poetic, and beautiful moment in time when the stars align and truly magical things happen:

Getting Kirk Cousins props for a prime-time game. Against Bill Belichick.

Now, there is some concern that Cousins might have jumped the gun by dropping an egg in Week 11 against the Cowboys, but fear not — Cousins has a reputation for doing his worst in the biggest moments, and my free NFL picks expect that to continue Thursday night.

You want a full Patriots vs. Vikings betting preview? My man Jason Logan has you covered. You want some TNF player props for some of the other big names in this game? Josh Inglis... step right up.

But if you're down to join in on the misery of betting Unders for NFL player props, then saddle up and let's ride with the Kirk Cousins experience.

The spirit of Thanksgiving... the ball away

The only silver lining in Cousins' absolute dud last week, in which he completed 12 of 23 passes for 105 yards in a 40-3 humiliation at home, was that he didn't throw an interception.

Cousins is currently tied for fourth in the NFL with eight interceptions this season, and he faces a New England Patriots defense that has a proclivity for picking off the opposition. The Patriots also did not register an INT in Week 11, but that snapped an eight-game streak of recording at least one pick and their 11 total interceptions are also tied for fourth in the NFL.

This is a bad matchup for Cousins (or a good matchup for betting on him) to throw an INT as he does not do well under pressure — his 42.3% completion rate and eight turnover-worthy plays (per Pro Football Focus) under pressure are 42nd among all quarterbacks and seventh-most in the league —  and New England's defense just happens to be second in pressure percentage, second in sack percentage, and first in hurry percentage.

He likely won't get much help from the run game either, as New England has allowed just 62.7 rushing yards per game over its last three contests. After getting sacked a season-high seven times last week, Cousins will be under fire again on Thursday, meaning we could see a lot of rushed/forced throws and a lot of passing attempts on 2nd/3rd and long — and considering the Pats don't even blitz at a Top-10 rate, being able to get pressure with extra guys in coverage boosts the chances of at least one interception occurring.

Cousins also tends to throw a lot of picks in prime time, with 26 INTs in 28 career evening games, including three against the Eagles on MNF in Week 2 this year and at least one in five of his last six prime-time games dating back to the start of 2020.

Finally, there's the price of a Cousins pick: currently, you can find this line at even money. Considering Josh Allen (10 INT in 10 games) is only -110 to throw a pick against the Lions and Cousins' TNF counterpart, Mac Jones (seven INT in seven games), is a whopping -165 to throw a pick — both against defenses that have fewer interceptions than New England — I'll happily take Kirk to give the ball to the wrong jerseys at least once.

No stuffing (the stat sheet)

I didn't hammer the "Cousins sucks in prime time" angle in the first pick... but I am gonna do it here. In his 11-year career, Kirk is 10-18 in night games, averaging 270.9 passing yards per game. If we focus on more recent times, however, Cousins is averaging just 215.2 ypg over his last 10 prime-time games (spanning 3+ seasons) — topping 251 passing yards just three times and once in his last six such affairs (Week 10 in 2020).

This week, he goes against a Patriots defense that is absolutely clamping down on opposing passing attacks, giving up the fourth-fewest passing yards per game (188.3).

Yes, those numbers are skewed by the Pats having back-to-back home games (against Sam Ehlinger and Zach Wilson) where they allowed those QBs to accumulate 180 pass yards combined, but New England has allowed an opposing passer to reach 252 yards just three times this season and once in its previous four contests.

Also not helping Cousins' chances at topping the 251.5 yardage total, which he's failed to do in three of his last five games overall, is the fact that the Minnesota Vikings likely also won't win the time-of-possession battle: Bill Belichick's crew has won the TOP in five of its last six games (running an average of 30.4 times per game) — while the Vikes have lost the TOP matchup in four of their previous five games and will struggle to run successfully against the New England.

As mentioned above, Cousins does not handle pressure well... and New England does a great job of bringing the heat. With the opponent having the ball more, less effective play-action — and his historical, umm, "trend" of bad prime-time performances — I'm backing the Under for this Thanksgiving finale.

Cousins' longest completion total is 38.5 yards right now, a total he's topped just four times this season (twice in one game back in Week 4), and all of those connections coming courtesy of megastar wide receiver Justin Jefferson.

There's no denying Jefferson's talent, but you know who's the best coach in the NFL at identifying your strengths and taking them away?

The Patriots have only given up two completions of 39+ yards this season — both in the same game — and have only allowed five other receptions of 30+ yards this year.

Cousins also hasn't been one to throw many deep balls this season overall, sitting 17th in the league with just 32 pass attempts of 20+ yards and 44th with an average depth of target of 26.1 yards.

There's always a chance Jefferson makes another miraculous play and gets Cousins over this total... but the odds seem unlikely so I'll bank on Belichick & Co. to limit Cousins to short/intermediate completions only. 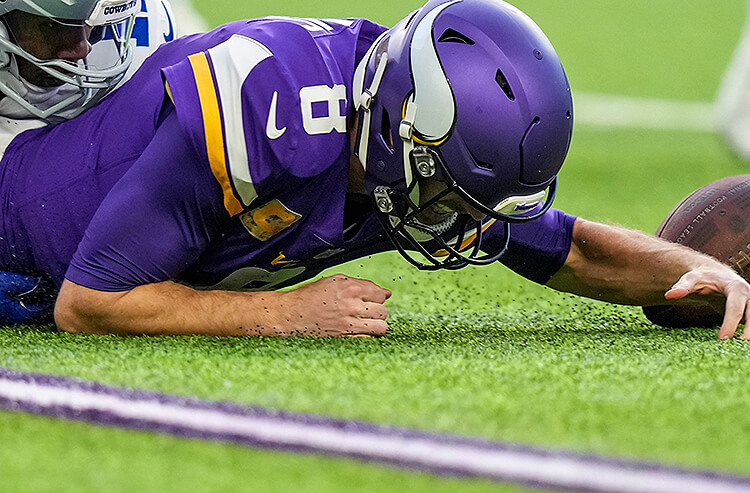