Dolphins vs Jets Week 5 Picks and Predictions: Can Either Side Push the Scoring?

The Dolphins and Jets both have question marks at QB that make us wonder just how many points they can muster on Sunday. With at least one side shaky on the run as well, and injuries abound, our NFL picks are fading scoring. 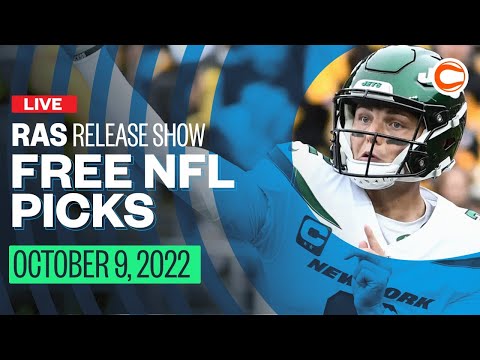 AFC East rivals will collide at MetLife Stadium on Sunday when the Miami Dolphins visit the New York Jets for a Week 5 contest.

Miami suffered its first loss of the season last week, as the Cincinnati Bengals beat the Dolphins 27-15 on Thursday Night Football. The Jets improved to 2-2 last Sunday with a 24-20 victory over the Pittsburgh Steelers.

With the Jets starting second-year quarterback Zach Wilson, and the Dolphins playing Teddy Bridgewater in place of the injured Tua Tagovailoa, both teams have question marks heading into Sunday.

We’ll look at what that means for bettors in our NFL picks and predictions for Dolphins vs. Jets on October 9.

Dolphins vs Jets picks and predictions

Zach Wilson got a win in his 2022 debut last Sunday, going 18-for-36 with 252 yards and defying my Under prop by managing to throw a touchdown pass in the fourth quarter. That’s not to say he was particularly impressive, however, as he also threw two interceptions. Still, for his first game in his return from injury, the Jets were likely happy with what they got.

On paper, the Jets should be able to attack the air against the Dolphins. Miami has allowed 299.3 yards per game through the air, the second-worst mark in the NFL. Meanwhile, the Jets have thrown the ball with regularity, averaging 277 passing yards per game, fourth-best in the league.

However, those yardage totals don’t tell the whole story. Joe Flacco put up most of that offense over the first three weeks of the season, often airing the ball out while the Jets were behind. Wilson is coming off a year where he completed just 55.6% of his passes, throwing only nine touchdowns against 11 interceptions over 13 games. Wilson showed flashes of promise, but he’s far from ready to be the starting quarterback for a good NFL team. Luckily, he plays for the Jets, which means he’ll get plenty of on-the-job experience.

The quarterback situation in Miami is just as messy. Tagovailoa started off strong this year, even throwing for six touchdown passes in a game against the Baltimore Ravens in Week 2. However, his head injuries have become one of the biggest talking points in the NFL, and knocked him out of last week’s game against Cincinnati.

That injury thrust capable backup Teddy Bridgewater into the starting role for the Dolphins. The veteran has never been a superstar, nor has he shown the ability to be an explosive weapon. Instead, he is reliable, accurate, and relatively safe with the ball — exactly what teams want out of a trusted backup quarterback.

The Dolphins likely won’t have Bridgewater take many chances against the Jets, despite how well the Miami offense clicked under Tagovailoa. The problem is that the Fins aren’t likely to have much success on the ground, either. Miami is averaging just 69.3 running yards per game, while the Jets have been stingy against the run, allowing just 3.7 yards per attempt, sixth-best in the NFL.

Between Wilson still figuring out how to be a consistent NFL quarterback and Bridgewater playing things safe, there won’t be much scoring in this game. We can get the total at 46 points, and with these two offenses unlikely to find much success on Sunday, I’m taking the Under.

Miami initially opened as a 2.5-point favorite for Sunday’s game, but that number has crept up a bit since then. Most books are now offering the Dolphins -3 as their standard line, though some, like Caesars, have set a 3.5-point spread instead.

Both of these teams are pass-heavy on offense, at least when it comes to production, and thus will be even more reliant on their quarterbacks and receiving corps than many other teams. While Wilson struggled in his debut last week, there were some promising signs late in the game, as he went 10-for-12 with 128 yards and a touchdown in the fourth quarter against Pittsburgh.

Bridgewater was solid for the Dolphins last week, throwing for 193 yards, one touchdown, and an interception after taking over for Tagovailoa. Bridgewater has beaten the Jets both times he‘s started against them in the past, including a 26-0 win with the Broncos last year.

Bettors will want to keep an eye on the health of a couple of key receivers for the Dolphins. Tyreek Hill was limited in practice on Thursday, as was fellow wideout Jaylen Waddle, who missed practice on Wednesday entirely. Hill leads the Dolphins with 31 receptions and 477 yards receiving, while Waddle has caught 21 balls for 381 yards and three touchdowns.

While both will likely play, the actual health of Hill and Waddle has me staying off this game right now. If one of them doesn’t play — or is significantly limited — Bridgewater will be even more shackled than normal, which could handicap the Dolphins offense to the point where I’d take the Jets to win outright in a low-scoring game.

The total on this game opened at 45 points, and has moved up about a point since then, with various sportsbooks offering Over/Under lines of 45.5 or 46.

I’m strongly recommending the Under in this matchup. We’ve already gone over why both teams may be somewhat limited in their passing attacks. However, it’s also worth taking a look at why I have so little confidence in either team’s running game to pick up the slack.

Miami is running for a paltry 69.3 yards per game on just 3.5 yards per carry. Its most successful running plays have come on end around handoffs to wide receivers, with primary running back Raheem Mostert having gained just 147 yards over four games. Change-of-pace back Chase Edmonds has been even less successful, running for an average of just three yards a carry in his 28 attempts — though at least he’s found the endzone twice.

The Jets have been only slightly better on the ground. Breece Hall is playing well, running for 4.7 yards a carry. However, he’s only run for a total of 178 yards on the season, with fellow back Michael Carter pitching in 137 yards. Both teams have a negative Expected Points Added on running plays this year: New York is at -0.12 EPA per run, with Miami at -0.14.

With no running games to speak of and plenty of questions in the passing attacks, it’s hard to see a lot of points coming out of this matchup. As I said in my best bet, the Under is definitely the play here.

The Under is 4-1 in the last five games between the Dolphins and the Jets. Find more NFL betting trends for Dolphins vs. Jets. 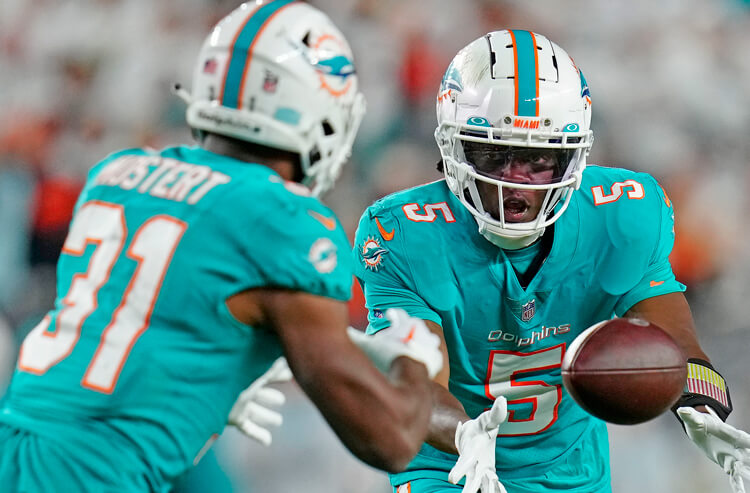 Dolphins vs Jets Week 5 Picks and Predictions: Can Either Side Push the Scoring?
Provided by