Tyreek Hill is primed to explode in a shootout between the Dolphins and Chargers on Sunday Night Football. See why all signs point to a big Week 14 outing, and our NFL picks are riding Cheetah to a must-bet. 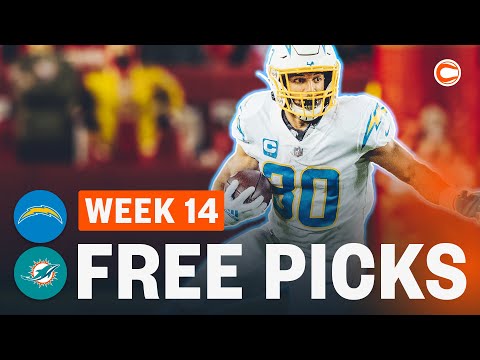 Miami stayed in California this week after taking a beating in San Francisco last Sunday, aiming to bounce back and keep pace in the divisional race as well as the conference standings. As for L.A., the Bolts have just one win in their last four and desperately need a victory to save their postseason hopes.

If the Over/Under is any indication, this will be a fun game to watch on wager on. I break down that tall total as well as the point spread for Sunday Night Football and give my best NFL picks and predictions for Dolphins at Chargers on December 11.

Also, be sure to check out Josh Inglis' favorite SNF player props!

Dolphins vs Chargers picks and predictions

Tua Tagovailoa took a lot of the criticism for last week’s loss in San Francisco, completing only 18 of 33 passes for 295 yards and finishing with three turnovers. While it appeared the Dolphins receivers were finding space with their cagey route running, Tagovailoa just had a bad day against a very good defense.

Helping him get his groove back in Week 14 will be his favorite target, Tyreek Hill. Hill praised his quarterback following the loss to the 49ers as well as head coach Mike McDaniel and has a chance to do serious damage against the Chargers on Sunday Night Football.

Hill’s receiving yards prop for Week 15 is at 7.5 Over/Under — a tick below his season average of eight catches per contest. While Hill reeled in nine of the 14 balls thrown his way against San Francisco last weekend, books are keeping this week’s receptions total low based on his recent efforts — outputs that were skewed by blowout wins.

In the three games prior to last Sunday, Hill was targeted a combined 23 times for catch totals of six, five, and seven. However, Miami held leads of 30-0, 30-10, and 28-17 in the third quarter of those contests and was playing a slowed-down, run-centric offense in the second half to secure the win with starters on the sideline at times.

This Week 14 contest with Los Angeles carries a tight spread and the tallest total on the board at 52.5 points, setting up a game script in which the Dolphins and Chargers trade haymakers on offense. And no player packs a bigger punch than the Cheetah.

Football bettors need only to go back to October 30 for an example of how this one will play out. Miami was a 3.5-point road favorite at Detroit, with the total also at 52.5 points in Week 8. That game finished 31-27 in favor of the Fins, with Hill leading that offensive eruption. He caught 12 of 14 passes his way for 188 yards — his lone indoor game until taking the fast track at SoFi Stadium on Sunday night.

Hill knows this Chargers defense scheme very well, going back to his days with the Kansas City Chiefs. In his last matchup with L.A. in Week 15 of 2021, Hill caught 12 of 13 targets for 148 yards and a touchdown as a member of the Chiefs. The Bolts secondary could also be missing key bodies in Week 14, with star safety Derwin James and CB Bryce Callahan not practicing this week.

Hill did miss practice with an illness this week but has plenty of time to rest and recover before Sunday night. Miami could go after the Bolts’ suspect rushing defense a little more, but this is a Miami offense that runs just 37% of the time.

Early success on the ground will really open up the Fins’ play-action-heavy playbook, and the shifty Hill can exploit that space for a busy night in Week 14 and top his reception total of 7.5 which is offering great value at plus money.

B) Tua Tagovailoa and Justin Herbert to each have 1+ passing TD in each half BOOSTED to +380 (was +280) at FanDuel! Sign Up Now

Miami opened as a 2.5-point road favorite last Sunday night and slimmed to -2 with some worry about Tagovailoa’s ankle injury suffered in the loss to San Francisco. Once the injury was not deemed serious, this line went back to -2.5 and shot up as high as -3.5, where it sat most of the week.

However, with news that top Hill missed practice due to an illness on Thursday, most books ticked down to Dolphins -3 with a handful still holding on to the half-point hook on the field goal spread. According to WynnBet sportsbooks, 68% of the bet count is on the visitor, while 53% of the handle is siding with Miami.

The Dolphins are coming off a bad outing against the 49ers in Week 13, with the Niners defense frustrating Tagovailoa for one of his worst performances of the season. The Chargers are nowhere close to the defensive stalwarts of San Francisco, entering Week 14 ranked 27th in EPA per play on the season.

Los Angeles is back home in SoFi Stadium for just the second home stand in 48 days after a grueling stretch of schedule that had it playing four road contests in five weeks. That said, SoFi is usually crawling with opponents’ jerseys and the Bolts own an average margin of -7.4 points at home this season — putting home field’s worth to the spread at a minimum.

This Over/Under number is currently the tallest total on the Week 14 NFL odds board. It opened at 51.5 points and quickly jumped to 52.5 with early play on the Over. Some respected online books are as low as 51.5 points, with Miami’s injury concerns at receiver.

Hill is dealing with an illness while WR2 Jaylen Waddle was back to a full participant after being limited in work this week. Tagovailoa was also limited in practice heading toward the weekend.

Another key injury to keep an eye on is LT Terron Armstead, who was limited in practice. Armstead is the lynchpin of the Fins’ offensive line and pass protection has declined greatly with him out of the lineup.

These clubs very much mirror each other in terms of strengths and weaknesses. Miami sits No. 5 in EPA per play while Los Angeles has seen its output muddled by injuries but has put up better numbers the past three games with an average of 24 points in that span.

Defensively, both teams are pretty bad, sitting in the back half of the league in many advanced metrics for the year. The Dolphins have been especially terrible on the road, where they allow 32.8 points against and own a road Defensive DVOA rating that sits 28th in the league (compared to No. 6 at home). The Bolts, funny enough, are 21st in DVOA at home, giving up an average of 28 points per contest as the host team.

Neither stop unit presents much pushback nor a disruptive pass rush, with Miami and L.A. in the lower third in pressure rate generated (though the Dolphins have improved in recent outings). That means plenty of pocket time for these two quarterbacks and ample opportunities for deeper pass plays to develop. The Chargers have injuries on the offensive line but could have center Corey Linsley back from a concussion in Week 14.

According to WynnBet sportsbooks, 52% of bet count for the total is on the Over, while 71% of the money is banking on a high-scoring finish in Southern California Sunday night.

The last time we saw the Dolphins indoors with a total this tall, they put up 31 points on 476 yards of offense and Hill was responsible for almost 40% of them. I like him to spark this Dolphins attack again and knock out a big play as well, having gone Over his longest reception prop in four of his last five games.

The Chargers are 19-12-3 ATS as underdogs since moving to Los Angeles in 2017, but just 4-4 ATS as a home pup in that span with a 2-6 SU record in those eight contests when getting the points at home. Find more NFL betting trends for Dolphins vs. Chargers. 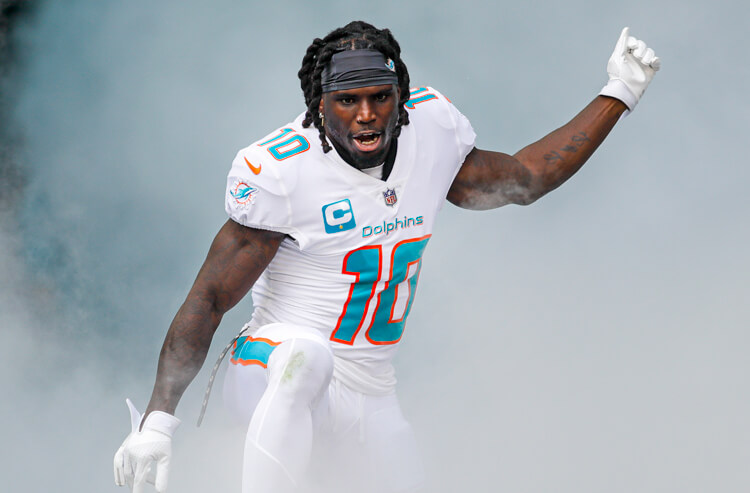