The Dolphins and Bengals both roll into Thursday Night Football coming off wins, and both the short week and several key matchups yield great props for Week 4's debut. Get our best TNF player prop picks — including Tyreek Hill to shine. 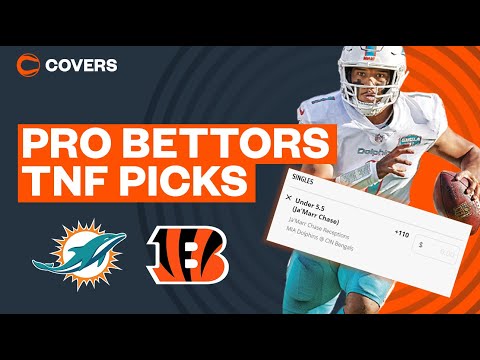 The Cincinnati Bengals got their act together in Week 3 while the Miami Dolphins used the Florida heat and questionable safety protocols to upset the Bills. Will the Dolphins' defense be gassed after playing over 40 minutes in the heat Sunday and a quick turnaround? Are the Bengals back or was the win in Week 3 more due to the Jets’ defense? Can Tua Tagovailoa get over his "back" issue and suit up?

Find out where my best bets lie in my free NFL player prop picks for Thursday Night Football between the Dolphins and Bengals.

Beating the ‘Phins in the air

Over the last two weeks, the Miami defense has given up over 715 passing yards to Josh Allen and Lamar Jackson. Xavian Howard played a full slate of snaps last week but has still been getting roasted on the corner and has a 140.7 QB rating when targeted this season. Miami is still without No. 2 corner Byron Jones (IR) while his replacement, Nik Needham, is allowing a 143.3 QB rating when targeted while allowing 17 yards per reception.

We know Joe Burrow has been getting pressured behind his line, and that scares me off his longest completion at 36.5 yards as he doesn’t have much time for routes to develop with just three completions of 40 or more yards. Instead, I’m pivoting to Tyler Boyd’s Over 17.5 yards for longest reception.

Boyd leads the team in catches of 20-plus yards with three and has the longest reception of all Cincinnati receivers at 56 yards. Boyd didn’t get downfield in Weeks 1 and 2 thanks to the Cowboys and Steelers’ elite pass rush, but a tired Miami defense should be beneficial on Thursday.

Even with limited production in Weeks 1 and 2, Boyd went into the Week 3 matchup with a team-leading 11.22 aDOT and only improved those numbers with his four-catch, 100-yard performance vs. the Jets.

Miami is allowing over 10 yards per reception and with three solid options for Burrow in the passing game, Boyd won’t have a ton of attention. This Miami defense currently sits in the Bottom 4 in success rate and EPA/play vs. the pass.

Tyreek Hill made some noise after Miami’s Week 3 win with some choice words towards Cincinnati corner Eli Apple. Cheetah said he couldn’t wait to go up against Apple and that he “owes him”. It could be taken as lip service but I’m using it for motivation on a Hill prop.

Once Tyreek Hill was informed the Dolphins are playing the Bengals Thursday, he immediately started talking trash to Eli Apple #Bengals #Dolphins

Hill is a perfect bounce-back candidate for the short week. After getting 11 balls for 189 yards and two scores in Week 2, the receiver saw just four targets for 33 yards last week. I’d expect Mike McDaniel to get him more involved this week and with Jaylen Waddle listed as DNP at the theoretical Monday practice report, his workload could be even bigger this week.

The Waddle tag may be nothing, but if he is limited in any way, Hill's props would climb quickly. As of Tuesday, there are no Miami receiving props but Hill closed at 64.5 in Week 1, 69.5 in Week 2, and 77.5 in Week 3. If I can get this number at 75 yards or shorter, I’m going to smash it in a game I like to be dominated by passing with Joe Mixon banged-up and the Dolphins unable to run the ball. I'm not reading too much into Tua missing this game but if Teddy Bridgewater were to start, this number would drop but still be a play at under 70 yards.

If Hill’s receiving total opens north of 75.5 yards, I have no issue pivoting to his touchdown market that's as long as +150. Hill had 20 total touches in Weeks 1 and 2 and I’d expected that volume to be similar Thursday after a quiet Week 3 and some noise in the media.

A new starter in town

Mike Gesicki should not have shorter odds for a TD or longer receiving totals than Durham Smythe. Gesicki has not fit well within McDaniel’s offense and was rumored to be on the trade block before final cuts. Now Smythe is getting the majority of snaps, but it’s Gesicki who has the shorter TD odds.

Smythe played 32 snaps to Gesicki’s 17 in Week 3 while seeing 17 snaps on passing downs compared to Gesicki’s 10. Smythe caught all three targets last week and is building rapport with his high-volume QB while Gesicki has seen just one target in two of the three games. Even if Tua were to sit, I'd have no issues holding on to this TD ticket with check-down happy Bridgewater under center.

I’ve been profitably fading Gesicki this season, but with no Miami receiving odds, I’m happy to take Smythe’s TD odds at +750. Getting that price for a starting tight end is unreal and likely the last week we’ll see it at this price if Gesicki continues to take a back seat.

The Bengals have been getting roasted by TEs this season and are giving up 74 yards per game to the position which is the third-highest mark in football. This price should be +300 or even a little shorter. If Smythe's receiving yard market opens, I'd suggest hitting it at anything under 17 yards.