Jonathan Taylor could have another field day against the Jaguars, and we're betting the Colts' quarterback play won't be as suspect as Week 18 last season. See why our NFL betting picks are backing Indy revenge.

Week 2 of the NFL is here, and we have a solid AFC South matchup for you.

Indianapolis found itself down 20-0 after three quarters, tied the game, missed an overtime field goal, and left Houston with the first tie of the NFL season.

Jacksonville began the season with hope for the future, but former Colts flameout Carson Wentz had other ideas, throwing four-TD passes and the Jags suffered a 28-22 away loss to the Commanders.

Who will win their first game of the season? Find out in my free NFL picks and predictions for this Week 2 showdown between Indianapolis and Jacksonville on Sunday, September 18.

Colts vs Jaguars picks and predictions

Matt Ryan and the Colts are in a bounce-back spot, and Indy’s veteran signal-caller has a tasty matchup with a Jaguars secondary allowing 313 passing yards and four TD passes.

Ryan had a solid debut with Indianapolis after spending his entire career in Atlanta, throwing for 352 yards and a scoring strike to star wideout Michael Pittman. Pittman hit the injury report with a quadriceps injury and is currently trending towards missing this contest.

The veteran Colts signal caller looked mostly relaxed (three bad first-half snaps) behind the offensive line, targeted seven different receivers, and with another week of practice under his belt, look for Ryan to target a young secondary that allowed six passing plays of over 20 yards in the Week 1 loss to Washington.

Obviously, RB Jonathan Taylor will play a huge role in the Colts offense. He had a tremendous opener, rushing for 161 yards with a touchdown on 31 carries. His offensive line is stout, and he’s up against a Jags defense that allowed 85 yards to various Washington backs, but the young Jacksonville defense hasn’t seen anything like Taylor.

The Colts defense played tough last week and the passing defense allowed 222 passing yards with only two plays of over 20 yards. The defensive line registered three sacks with five tackles for losses and will make life miserable for the Jags offense.

Make no mistake, Jags QB Trevor Lawrence is the real deal, and he and wideout Christian Kirk hooked up for 117 yards with two plays over 20 yards against Washington. Jacksonville was 2-5 in the red zone but committed 13 penalties along with two turnovers and essentially beat itself — like bad football teams tend to do.

Finally, Indianapolis brought Ryan in for a reason, and that’s to deliver in big games — and he’ll deliver on Sunday. With or without Pittman, Ryan will spread the ball around and attack when the situation presents itself, and Taylor will be the workhorse. The Colts defense will step up, and while they may bend a bit, it won’t break. Indianapolis will cover the 3.5-point spread.

Indianapolis is currently -189 on the ML, and that number might not be a bad play for this contest.

Jacksonville played a home spoiler in their season-ending defeat over Indy that eliminated the Colts from the playoffs. The Colts players on the sideline that day have circled this contest on their schedule, and Ryan was brought in to win games like this.

Finally, the Colts defense is going to put constant pressure on a bad offensive line, and Lawrence will be lucky to reach the 57% completion rate of a week ago. The Colts are a good bet for a straight-up win Sunday.

This one opened at Colts 45.5 and that number has risen to 46 points. Not a big move, but it does make playing the Under at -112 a decent wager.

The Colts defense may bend, but it doesn’t break, and they’ll throw the kitchen sink at Lawrence. Washington pressured the Jags signal-caller into a couple of sacks alongside a 57% completion rate, and I expect Indy to attempt the same things with equal or greater success.

Expect Taylor to take the lead role, and if he gets 31 touches, the clock is going to become the Jags’ enemy. The Jags aren’t a big-play type of offense and with the clock against them, they’ll be forced to do things they aren’t comfortable with. I see plenty of three-and-outs with a pair of picks in this matchup.

Since 2019, the Under is 11-8-0 when the Colts play a division foe, and 9-9-0 over that same span when Jacksonville meets its AFC South rivals. The Under looks good to me. 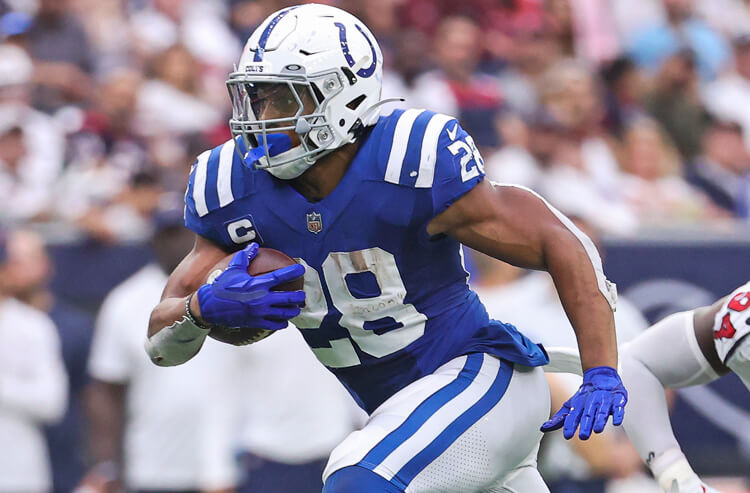