It’s been just seven months since we saw the San Francisco 49ers squander a third-quarter lead against the Kansas City Chiefs to lose Super Bowl LXI, but that feels like a completely different era; a blissful time when corona was just an easy-drinking beer and nobody knew what the KBO or Tik Tok was.

After what seems like the longest offseason ever, NFL betting is back as those 49ers host the Arizona Cardinals as 7-point favorites in Week 1 of the 2020 season.

We break down the NFL odds with our free picks and predictions for the Cardinals vs. 49ers on September 13. **video

It's expected to be a sunny afternoon at Levi's Stadium with temperatures down in the low-70's and winds up to 10 mph from the West. Be sure to monitor the gametime conditions with our NFL weather info.

The Cardinals are 7-3-2 ATS in their last 12 games overall. Find more NFL betting trends for Cardinals vs. 49ers.

The big question for the 49ers this season is whether they can shake off the dreaded Super Bowl hangover. Not only do many Super Bowl losers fail to replicate their success from the previous year, but oddsmakers and the public have a tendency to overvalue them, especially earlier in the season.

Since 2002, teams that are coming off a Super Bowl loss and weren't the dynasty New England Patriots have gone just 4-11 SU and 2-13 ATS in Week 1 of the NFL season.

Many of the same pieces are still in place for a San Francisco team that went 13-3 in 2019 and the trade for Trent Williams should solidify their offensive line. However, the loss of Second-team All-Pro DeForest Buckner will affect their defense, and depth at wide receiver is still an issue especially with their current rash of injuries at the position.

The Cardinals are a young and hungry bunch led by second-year QB Kyler Murray and offseason addition DeAndre Hopkins. While the 49ers won both games against the Cards last year, both contests were close. In the first meeting, San Fran won 28-25 and in the second meeting, the Niners scored the go-ahead touchdown with less than a minute left in the game.

With Murray showing improvement throughout the season, Arizona finished last year on a high note, going 7-3-2 ATS in their final 12 games. They are also 4-0-1 ATS in the last five contests in the head-to-head against San Francisco, which makes us like their chances of covering on Sunday.

San Francisco had one of the toughest defenses in the league last season, ranking second in the NFL in yards allowed and seventh in scoring, limiting opponents to 19.5 points per game. However, both games against Arizona went Over the total with the Cardinals scoring 25 points in the first meeting and 26 in the second.

Murray impressed in both contests against the Niners, completing 71.9 percent of his passes for a total of 391 passing yards and four touchdowns while picking up another 101 yards and a score on the ground. Now that last year's NFL Offensive Rookie of the Year has more experience under his belt, as well as an elite pass-catching talent in Hopkins, he should be even better.

While the Cardinals high-tempo offense should be ready to roll in Year 2 of the Kliff Kingsbury experiment, the real question lies with their defense. Drafting linebacker Isaiah Simmons in the first round and signing defensive tackle Jordan Phillips should help Arizona's stop-unit.

However, this is a Cards team that allowed a league-high 402 yards per game last season and they'll be facing a 49ers squad that piled up 153.5 rushing yards per game and 4.8 yards per attempt. With Raheem Mostert and Tevin Coleman returning to the 49ers backfield and Kyle Shanahan still at the helm, expect more San Fran success on the ground and take the Over.

After a 2018 season where he set the NFL record for receiving yards by a tight end with 1377, George Kittle was due for some regression last year. Kittle still had an excellent season racking up 1053 receiving yards in 14 games and a couple of factors have us expecting a big game from him on Sunday.

The Cardinals allowed a league-high 1148 receiving yards to opposing tight ends in 2019 and the 49ers wide receiver corps is absolutely riddled with injuries. Expect Jimmy Garoppolo to lean on his favorite target and hammer the Over 67.5 on Kittle's receiving yards total. 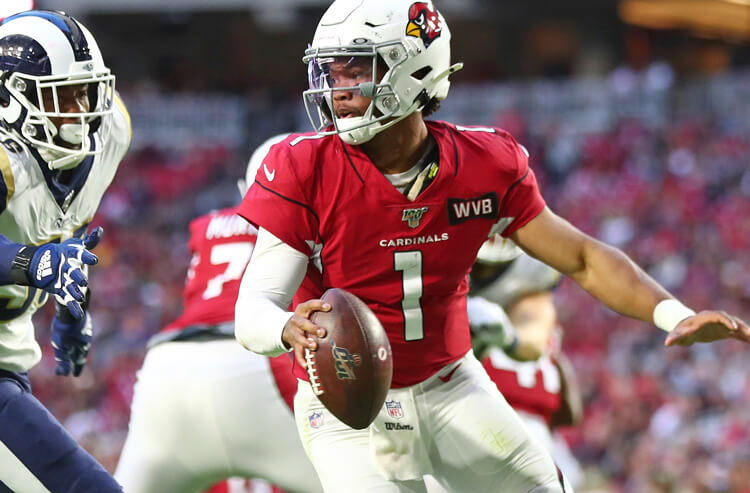 Cardinals vs 49ers Week 1 picks and predictions
Provided by