NFL bettors have been counting down to a Week 1 matchup between the Tampa Bay Buccaneers and the New Orleans Saints like kids anticipate Christmas morning. **video

Tom Brady and the Buccaneers hit the board as 5-point underdogs in the Big Easy back in May, and early money bit on the new-looks Bucs, trimming that NFL betting spread to +3.5. New Orleans is the gatekeeper of the NFC South, but time is ticking on the Saints’ Super Bowl hopes, especially with Tampa Bay’s new additions.

We give our NFL free picks and predictions for Buccaneers vs. Saints on September 13.

This game will be played inside the Mercedes-Benz Superdome. Be sure to monitor all gametime conditions with our NFL weather info.

The Saints are 0-6 ATS in their last six Week 1 games. Find more NFL betting trends for Buccaneers vs. Saints.

The Saints are always a tempting bet at home, even more so as short favorites, but the Superdome just isn’t going to be the same in Week 1. And neither are the Bucs.

Tampa Bay is no longer shooting itself in the foot with a quarterback turning the ball over as much as Jameis Winston, which not only helps the offense keep the chains moving but allows one of the best defenses in the NFL to play like one.

The Bucs stop unit finished 14th in defensive DVOA at Football Outsiders last year, despite opponents running more than 67 plays per game (third-most) and being forced back on the field following those turnovers far too often.

Tom will win over the Tampa Bay faithful and the Bucs defense by running a methodical attack that chews up the clock – keeping the ball away from Drew Brees and Michael Thomas – and giving the stop unit proper downtime to slow the Saints.

As much hype as Brady and Brees bring into this late-afternoon attraction, the Buccaneers and Saints could have two of the better defenses in the NFC this season.

New Orleans has a leg up with familiarity on that side of the ball, with plenty of returning cogs to a defense that ranked second in DVOA and allowed just over 21 points per contest in 2019.

Tampa Bay’s defense gave up scores of 31 and 34 points to New Orleans last season but was decimated in the TOP battle in those two matchups, with the Saints possessing the football for a collective 70.5 minutes.

The total for this game opened at 49.5 and slimmed to 49 points over the summer. With the public likely pulling the trigger on the Over in this heavily-hyped late-afternoon matchup, Under fans will want to hold off and see how tall the total climbs by kickoff.

Brady has made superstars out of slot receivers, with Wes Welker and Julian Edelman putting up careers well beyond their scouting expectations.

Chris Godwin could be the next WR to blow up with Brady, coming off a 2019 season in which he caught 86 balls for 1,333 yards and nine touchdowns – 50 of those catches in the slot for 838 yards and five scores. Godwin is a bigger target than Brady’s previous slot options (6-foot-1) and has a lot more on the table in terms of skillset and abilities.

He put up big numbers against New Orleans last season, scoring three touchdowns and totaling 172 yards through the air in two games. With so many targets for the Saints defense to account for, we expect Godwin to find space and add some major yards after the catch. 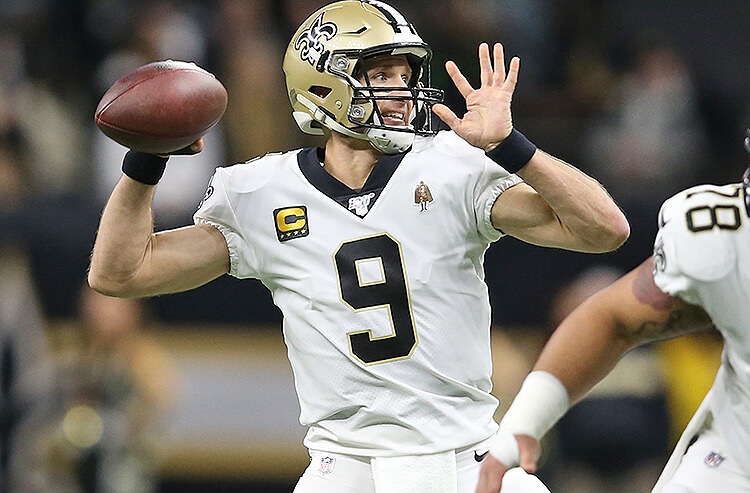 Buccaneers vs Saints Week 1 picks and predictions
Provided by