The Tennessee Titans made a statement last week, beating the Colts in Indianapolis 45-26 and taking sole possession of the AFC South. This Week, King Henry and Co. take on another 8-3 team in the Cleveland Browns at home.

The Browns squeaked out a 27-25 win against a Jacksonville team who was starting their third QB and haven’t won since Week 1.

The Titans were three-point favorites on the look-ahead, but after Week 12, they find themselves at-5.5 and trending up. The 54.5-point total is the highest on the board.

Partly cloudy skies and temperatures around 50 are expected at Nissan Stadium Sunday. A minimal breeze (3 mph) is also in the forecast, with no chance of rain. Be sure to monitor the gametime conditions with our NFL weather info.

The Browns are 1-10 ATS in their last 11 road games. Find more NFL betting trends for Browns vs. Titans.

The Browns have been one of the worst covering teams on the road over the last two seasons, going 1-10 ATS in their last 11. Cleveland has failed to cover in three straight road contests and is 1-5 ATS in its last six games. This is a Brown’s defense that almost got beat by Mike Glennon and the Jaguars, allowed 5.8 yards per carry to James Robinson, and now has to face late-season Derrick Henry.

The Titans gained 449 yards against the Colts’ No. 5 DVOA defense per Football Outsiders, and outgained Indy on the ground 229 to 56. Tennessee will pound the rock, burn you on the play action and never turn the ball over. No team has fewer giveaways than the Titans, as Mike Vrabel’s team is averaging just 0.5 giveaways a game while forcing 1.5 turnovers.

Cleveland’s secondary injuries are a major concern heading into this weekend’s matchup too. Possibly without two starters, another Myles Garrett absence could expose a bottom-half passing defense if the Browns sell out to stop the run.

We’re getting on this number quickly.

This Tennessee team has no problem hitting the Over despite their love for the run. The Titans sit fourth in the league in points per play, behind only the Chiefs, Seahawks and Packers. They’re also scoring 2.9 red-zone TDs per game (1st) and are getting TDs in 83% of their red-zone trips at home (2nd). When this offense gets chances, they capitalize.

The Browns are also in love with running the ball, and are doing it successfully as well. Nick Chubb is averaging 128 yards per game since his return from injury three weeks ago. Both teams could be gaining big chunks of yards on the ground, opening up chances for big plays through the air.

The Titans are one of six teams scoring more than 30 points per game at home this year. That’s impressive considering they haven’t hit that mark in three straight home games. That trio of matchups consisted of three top-five DVOA defenses, and the Titans still hit 24 points twice.

The Browns have played three of their last four games in terrible weather conditions and in the one game that had good weather, Cleveland allowed the 25th-ranked offense to score 25 points. No team in the league is allowing more points per game on the road than Kevin Stefanski’s Browns at 34.6. 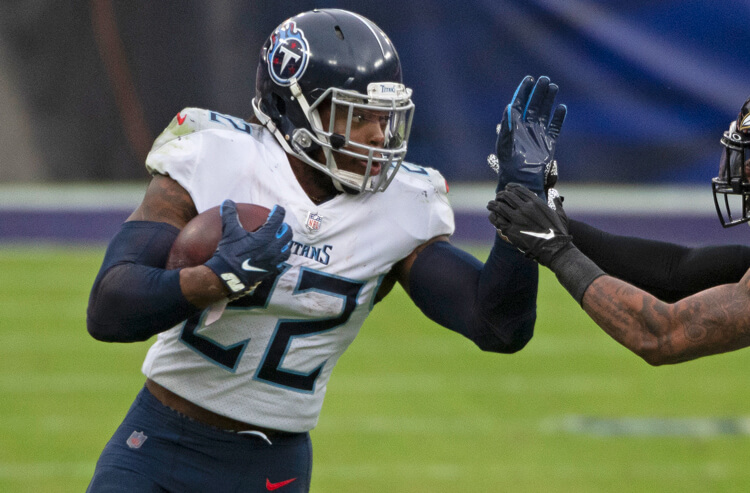 Browns vs Titans Week 13 Picks and Predictions
Provided by