The Indianapolis Colts are 7-0-1 ATS in their last eight visits to Houston and opened as 2.5-point favorites for Sunday's contest.

The Indianapolis Colts had a chance to take over the lead in the AFC South last week but squandered that opportunity in a 45-26 loss to the Titans. Now the 7-4 Colts will have to rebound against one of the league’s best 4-7 teams in the Houston Texans.

The Texans are still smiling about their Thanksgiving beatdown of the Lions but will be without one of their best offensive talents in WR Will Fuller V who got busted for PEDs earlier this week.

NFL betting odds have the visiting Colts as three-point favorites (total at 52) after opening at -2.5.

Here are our NFL free picks and predictions for Colts vs. Texans for Sunday, December 6 (1:00 p.m. ET).

The temperature is expected to be in the mid-50s at NRG Stadium on Sunday. With clear skies and no chance of rain, the retractable roof should be open. Be sure to monitor the gametime conditions with our NFL weather info.

The Colts are 7-0-1 ATS over their last eight games in Houston. Find more NFL betting trends for Colts vs. Texans.

What used to be the league’s best defense gave up 42 points at home in a massive divisional game as the Colts got steamrolled by the Titans in Week 12. Over their last three games, the Indy defense has been allowing six yards per play, which is the third-highest mark in the league over that stretch.

The Colts also have some injury concerns on the O-line as two starters could be out this week. That won’t help their already terrible running game (31st in yards per rush) and it comes at a bad time as the Texans are allowing the most yards per rush attempt this year.

Houston RB David Johnson could suit up Sunday, which would be a big boost for the Texans. They lost their No. 1 receiver in Will Fuller this week due to a PED suspension but still have talent in the receiving game with Brandin Cooks, Keke Coutee and rookie Isaiah Coulter (questionable).

This is a tough one to handicap but we feel we’re being swayed by last week’s outcomes too much on this spread. If you had asked us in Week 11, Indy would be a no-doubter here as Houston losing their best WR is a big deal for a team that also can’t run the ball.

The Colts have hit the Over in six of their last seven games as this defense has been giving up 28.1 points per game over that stretch. Their offense is also doing its part (albeit against poor defenses), scoring 28.4 ppg since the beginning of October.

On the other side, Houston’s Deshaun Watson is one of five QBs to average more than 290 passing yards a game this year and could find success through the air against an Indianapolis passing defense that is giving up 12 yards per completion since Week 10—the highest mark in the league.

The Colts will also have to try out a new punter this week as starter Rigoberto Sanchez needs surgery and will be out a while. The Colts have the best defensive starting field position per opponents’ drive (29-yard line) and Sanchez’s replacement could mean better field position all day for Houston.

With Fuller’s PED suspension, Cooks could be in line for a big day Sunday, as the Texans sit 28th in yards per rush but first in yards per completion. Last week, Fuller caught six of his seven targets for 171 yards and that volume and attention should go to Cooks this week in a game that the Texans could be playing catch-up early.

The Colts gave up 228 yards on the ground but also allowed two Tennessee receivers to top 70 yards on nearly 24 yards per catch. Cooks has at least 80 yards receiving in three of his last four games and has no problem being the No. 1 in a passing attack. 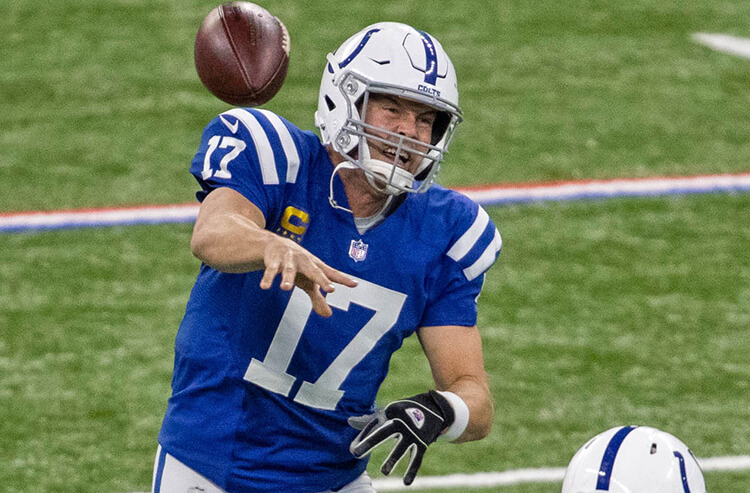 Colts vs Texans Week 13 picks and predictions
Provided by

2022 NFL Offensive Rookie of the Year Odds: Pickett Leading the Board
Trevor Knapp | Jun 14, 2022
About Us
Contact Us
Careers
Our Team
Brand
Testimonials