Miami and Tua Tagovailoa stole the show last Sunday but will be hard-pressed to repeat against a dominant Buffalo team. Either way, in a divisional clash our player prop picks are counting on fireworks between the Bills and Dolphins.

One of the best games of the Week 3 NFL betting slate looks to be in South Beach, where the unstoppable Buffalo Bills head to face the Miami Dolphins.

Miami enjoyed a phenomenal comeback win last week but will no doubt need to repeat its production to hang with Josh Allen & Co. With a potential shootout looming, there's no shortage of intriguing options on the NFL player props market.

Tua in a row

Despite Tua Tagovailoa's career day last week, in which he threw for 469 yards and six touchdowns in an incredible comeback win for the Dolphins, we're looking at a friendly passing yards total of 253.5 for him in Week 3. Not only is Tagovailoa set up really well to hit the Over here, it isn't even a reaction to last week.

Mike McDaniel has done wonders through two weeks, and his sensible coaching has empowered Tua to play the best football of his career. Miami's pass rate over expectation sits at 9.2% this season, which is the fourth-highest rate in the league — behind the juggernauts of Buffalo and Kansas City. McDaniel clearly recognizes the value of neutral-script passing and that alone will give Tagovailoa ample opportunity.

The Phins' new-found aggressiveness will meet a perfect matchup this weekend, as the Bills will be without a pair of starters in the secondary — Micah Hyde and Dane Jackson — in addition to All-Pro Tre White, who's on PUP. A shorthanded secondary is not what you want against Miami and its dynamic 1-2 of Jaylen Waddle and Tyreek Hill — who are also 1-2 among receivers in yards after the catch this year.

It's not like game script will betray us here, either. The Bills are an absolute buzzsaw and not one Miami's defense is equipped to slow down. The Dolphins are going to need to be aggressive wire-to-wire to try and keep up with Josh Allen's offense and by doing so, Tua will easily go Over this number.

We've reached the stage of Buffalo's offense where it doesn't even pretend to want to run the ball. Why bother, when you have an upgraded version of 2015 Cam Newton under center?

The Bills have the highest pass rate over expectation in the NFL, at 13.9%, while their backfield has combined for just 35 carries — despite eight quarters in cruise control. Buffalo's brain trust gets credit for keeping the ball in the hands of its best player, with Josh Allen at the height of his powers, but personnel factors in, too.

Which is to say, the personnel isn't very good. After a middling 2021 as the starter, Devin Singletary has maintained that level into 2022. The former FAU back has totaled 67 yards on 14 carries this year — a downright hideous line when you take away his two longest runs and it becomes 38 yards on 12 carries.

Compounding Singletary's inefficiency is that he's also ceding a lot of carries, with the running attempts split four ways between himself (14), James Cook (12), Allen (11), and Zack Moss (9). Allen is transcendent and will keep calling his own number consistently, while the Bills are surely looking for more opportunities for Cook, the second-round rookie and easily the most dynamic back Buffalo has.

Even in a potential blowout, I wouldn't trust Singletary to go Over his rushing yards total. In a game I expect Miami to keep competitive and push the Bills to the end, I certainly won't hesitate to fade Singletary.

Too Diggs to fail

We're going to continue with the theme of a high-scoring back-and-forth between these two teams and count on the NFL's most lethal connection to continue as such in Week 3.

Josh Allen and Stefon Diggs immediately established superb chemistry in 2020, the pair's first season together. While they may have come back to earth a bit in '21, the start of '22 has represented a trip to the moon.

It's all set up for another explosion this week, too. Gabriel Davis is questionable opposite Diggs, after sitting out last week. On Miami's side, former All-Pro corner Xavien Howard started the week as DNP and has upgraded only to limited, while another former All-Pro corner, Byron Jones, is on the PUP for at least another two games.

There's no need to overcomplicate this prop, with Allen to Diggs the NFL's most simple propisition. 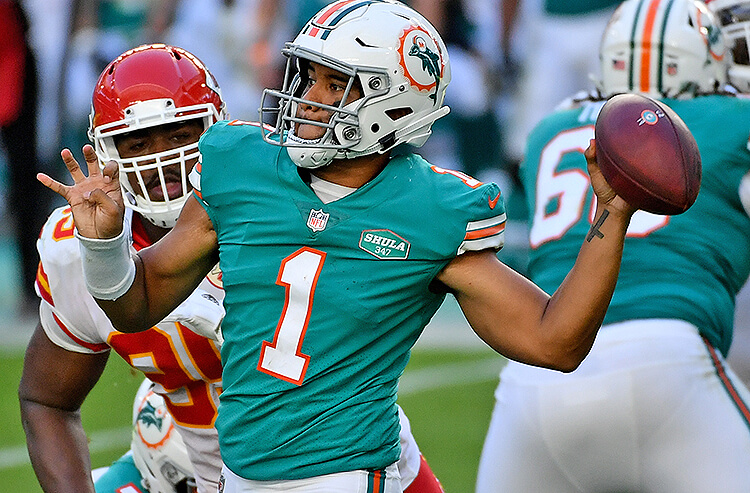