Don't let the records of these two teams fool you - for the last seven weeks, Western Kentucky has been the best team C-USA team, and they'll show why in the Championship game this weekend. Read more in our Western Kentucky vs. UTSA picks and predictions.

The Western Kentucky Hilltoppers will take on the UTSA Roadrunners for the Conference-USA Championship.

The Roadrunners lost their first game of the season on the road against North Texas, 45-23. While the Roadrunners put together a quality season, they will not be able to complete a perfect season. Still, the season was good enough to compete for a conference championship.

Meanwhile, the Hilltoppers went streaking, winning seven straight games after losing to UTSA, 52-46 back on October 9. Western Kentucky would like to think it’s a better team since that game. Here are our picks and predictions for the Conference-USA Championship game for Friday, December 3.

Western Kentucky opened as an underdog but is currently a favorite against UTSA despite losing to UTSA earlier this season. Meanwhile, the total has shifted from 73.5 at open to 72.5 and as low as 71.5 at a couple of outlets.

It’s hard to argue against Western Kentucky in this spot. Since losing to UTSA, the Hilltoppers are undefeated and have been one of the best offenses in the nation.

Meanwhile, the defense has struggled to stop the run, giving up 149.4 yards per game. The tackling hasn’t been great either, but UTSA has struggled even more with tackling. Still, the coverage has been fantastic, as Western Kentucky is holding teams to just 261.9 yards per game using a pass rush that has also added plenty of pressure onto opposing quarterback.

UTSA, on the other hand, is scoring 36.9 points per game while allowing 22.2 points per game. The Roadrunners can score points in a hurry but have struggled to protect quarterback Frank Harris, who still has 23 touchdowns on the season with just five interceptions.

Defensively, the Roadrunners have excelled at stopping the run, allowing 121.6 yards per game. The pass rush has also been very effective; however, the coverage has been a bit of an issue, despite allowing just 225.2 points per game.

With a secondary that is going to struggle against Western Kentucky, it’s hard to believe that UTSA will win this game with the momentum that the Hilltoppers have offensively.

In the first meeting between these two teams, UTSA won 52-46. In conference championship games, the defense might step up a bit, but even a scoreline of 41-38 would bring this game Over the total.

Western Kentucky started off shaky. But after that UTSA loss, the Hilltoppers figured it all out. In the last seven weeks, despite UTSA staying undefeated for most of it, Western Kentucky simply looked like the best Conference USA team.

I’ll side with Western Kentucky. UTSA is about to lose two straight after starting the season 11-0. 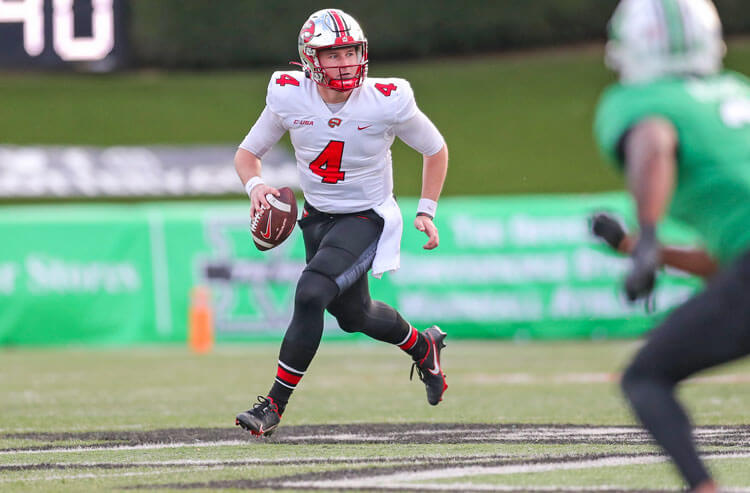