Andrew Caley's bringing you his best college football picks and predictions every week in the Triple Option. We've come to the end of the road as we enter Championship Week with bowl season looming. Let's finish in style with another four-pick week. 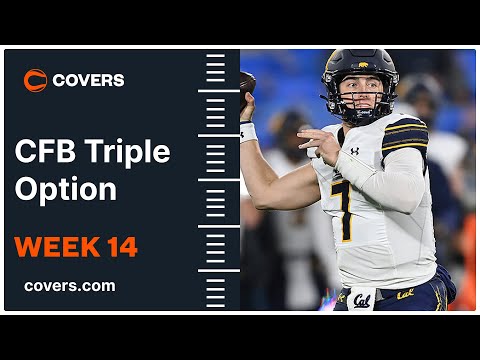 It’s crazy to think the final Triple Option of the season is here as Championship Week is upon us and bowl season is just around the corner. So, we’ll try to close the regular season in style as we pick some of the biggest and most meaningful games of the year.

That includes plays on the SEC and Big Ten Championship Game, plus, we may even have one more “Quitter of the Week” as the regular season wraps up.

That and more as the Triple Option returns with my best college football picks and predictions for Championship Week.

We start with the SEC Championship game and, full disclosure, I really wanted to pick Alabama here. Bama has always seemed to have Georgia's number and it's the first time Alabama has been an underdog since October 2015, at Athens against Georgia no less. So, it’s quite a rare opportunity to get nearly a touchdown with the Crimson Tide.

The only problem is Bama hasn’t given us enough reason to back them at this point. Despite six straight wins, the Tide have been underperforming in general ever since the loss to Texas A&M, and maybe even a little before that (Florida).

Alabama is coming off its miracle escape in the Iron Bowl, coming back to beat Auburn 24-22 in overtime. But that game was the latest example of how teams have done well against the Tide. The Tigers bullied them on the line for most of the game. That’s what Florida did. That's what Texas A&M did. That’s what LSU did. Even Arkansas and Tennessee did it to an extent.

On top of that, it’s hard to think that Alabama will get its run game going against what looks like a historic Georgia defense.

Meanwhile, Georgia has shown us who they are all season. Dominant. And despite the massive spreads, they ended up 8-4 against the spread for the season. That defense ranks first in total yards and is allowing less than a touchdown per game.

Now, Heisman favorite Bryce Young is the best quarterback Georgia has faced all season. But if that Bama offense gets too one-dimensional it could be a problem if the Bulldogs' D-line can pin its ears back and get after him. We’ve got to back the Dawgs here.

I really wanted to take Pitt in this ACC Championship Game as well, but their tendency to give up big plays is a bit worrisome against a solid Wake Forest offense. What doesn’t give me worry is this: Wake Forest’s defense. Simply put, the Demon Deacons are bad.

Now, they are facing off against Kenny Pickett, who just might be the first quarterback taken in next April’s NFL Draft.

It's been a huge year for the Panthers’ signal-caller, throwing for 4,066 yards while completing 67.7 percent of his passes with 40 touchdowns compared to just seven picks. Pickett also knows if he lights up the Deacs in the ACC title game and Bryce Young stumbles against Georgia, he’ll have a shot at the Heisman Trophy.

Pickett will be able to move the ball up and down the field all game against this Wake Forest defense and the Panthers should put up close to 40 points in this matchup, making their team total of 36.5 a touch too low.

The Big Ten Championship will be interesting considering the way Michigan and Iowa match up. They are very similar teams, and they both play very good defense while relying on the running game for their respective offenses. The only problem is Michigan is pretty much a better version of Iowa at almost every position (except punter). Think of Iowa as the K-Mart version of Michigan.

So, I could see this game going a couple of ways. One, Michigan’s edge in talent eventually wears out the excellent Iowa defense, and it becomes evident the Hawkeyes just don’t have the necessary tools to keep up with the Wolverines on offense in what becomes a Michigan blowout.

Or two, Michigan, coming off the huge emotional letdown after finally taking down its biggest rival in Ohio State, gets stuck in a grind-it-out, back-and-forth battle against an Iowa defense that ranks sixth in the nation in opponent yards per play and is one of the best in the country at forcing turnovers.

I’m feeling it’s the latter, particularly when we are getting so many points with a total hovering around 43. I think Michigan wins this game but Iowa will make the Big Blue and their fans sweat out their first conference championship since 2004.

We get one more “This Team Has Already Quit on the Season” bet this year! Now, you might think in a makeup game between Cal and USC that both teams have quit, but no one has quit more heading into this game than USC.

It’s been a weird week for the Trojans, who got the big news that Lincoln Riley will be their new head coach. But that doesn’t mean squat until next season. All of the coaches in this game are lame ducks and the players look nearly as unmotivated as they prepare for the new regime to clean house.

There were even weird reports coming out of practice this week. One day it was delayed because of a team meeting. Guys were wandering on and off the field. And when the practice did happen, many players were missing.

Then there's the product on the field. USC enters this game at 4-7 and went 2-6 straight up and against the spread over its last eight games. Kedon Slovis lost the starting job to freshman Jaxson Dart, who has been OK, but like Slovis, is struggling with turnovers. Meanwhile, the defense ranks 114th in the country in yards allowed per play.

On the other side, Cal might not have a chance to get bowl eligible with a win, but this matchup will basically be the next best thing to the Golden Bears.

Cal enters this matchup actually having won three of its last five games, and the defense has been solid if unspectacular, ranking 41st in opponent yards per play.

But the real thing to like here is the players at Cal often get overlooked by USC and they would love nothing more to kick the Trojans while they’re down.

Oregon vs Utah (-2.5, 58): The Ducks and Utes meet for the second time in three weeks, this time in the Pac-12 Championship Game. Utah throttled Oregon 38-7 in that game and dominated the Ducks in the trenches. That should happen again here. Plus, the Utes could be motivated after seeing the Ducks still sitting seven spots ahead of them in the latest CFP rankings.

Baylor vs Oklahoma State (-5.5, 46.5): The Big XII Championship is also a rematch from the regular season, one in which OK State defeated Baylor 24-14 back in early October. The Pokes have a shot at the CFP but need a convincing win. That could be hard unless they get better quarterback play out of Spencer Sanders.

Houston vs Cincinnati (-10.5, 53): Can Cincinnati become the first Group of Five team to qualify for the College Football Playoff? It feels like they will do just that if they can secure a win in the AAC Championship Game. But Houston will provide a tough task. The Cougars have won 11 in a row with solid QB play and an excellent defensive front.