Vanderbilt vs Alabama Odds, Picks and Predictions: Improved Vandy Washed Away by the Tide

The doormat of the SEC for years, Vanderbilt looks to be improving and remain competitive this year. A matchup with the Crimson Tide, in Alabama no less, is not the place for that — as our college football betting picks highlight.

An improved Vanderbilt team will meet a juggernaut in the Alabama Crimson Tide this weekend in the first conference matchup for both teams.

The Commodores have started the season at 3-1, with their latest win against Northern Illinois. For Alabama, it's been business as usual. It has gotten off to an undefeated start, including a one-point win at Texas.

Can Vanderbilt keep this one close? Find out in our college football picks and predictions for Alabama vs. Vanderbilt.

Vanderbilt vs Alabama picks and predictions

Every Alabama opponent for the rest of the season will be looking at Texas' game plan against the Tide to try to replicate it. Alabama didn't deserve to win that game from any objective perspective, but it came away with the one-point win anyway.

The Longhorns’ defense was incredible throughout most of the game, but it was imposing in the second and third quarters when it forced Alabama into passing downs through 100% success rates on early downs. Essentially, this was done by controlling the line of scrimmage early in downs and keeping Alabama's starting field position under the 25-yard line.

Texas was so successful that it finished the game with an 80% postgame win expectancy. Vanderbilt doesn't have the players to do this successfully, but can it replicate the game plan with enough effectiveness to get a cover?

To answer this question, you have to answer if Vanderbilt can control the line of scrimmage for any period of the game. I think that answer is a resounding no.

Another place where the Commodores find themselves at the bottom of the SEC is front-seven havoc. Havoc measures the percentage of plays in which the defense generated a TFL, pass deflection, or turnover. This is just a long way to say that Vanderbilt does a poor job at the point of attack. You can't do that against Alabama.

We haven't even got to Vanderbilt's offense vs. Alabama’s defense. I'm not sure that's much of a fair fight, nor I'm sure it matters much. While we're here, let's note why Vanderbilt has been more successful this season.

The biggest reason is that it has created a good amount of explosive plays by passing the ball. The Commodores' explosiveness rating has jumped in a significant way from a season ago. In addition, they've created the third most passing plays over 20 yards in the SEC.

Again, that's a massive jump from what they accomplished a season ago. However, the problem for them is that this is where the Alabama defense excels. The Tide don't give up big passing plays. They are tied for first in the SEC with passing plays allowed of over 10 yards at just 17.

I do not see a direct route for Vanderbilt to stop Alabama or score on Alabama.

I think there's a circumstantial angle of Alabama wanting to be dominant in its first conference game of the season that aids in taking it. Additionally, I believe the Tide are very aware of how badly its rival Georgia has beaten opponents to start the season and will want to match that. It isn't easy to qualify just how much these angels mean, but we know they tell at least something.

Let's look at a few trends before we wrap our analysis up:

Alabama is 5-0 ATS in its last five games after accumulating more than 450 yards in the previous game.

The Favorite between these teams in 4-1 ATS in the last five meetings.

I fully expect Alabama to dominate this game from start to finish. A matter of the Tide covering the spread may go down to how much desire they have to do so. I think they'll have plenty of motivation not to take their foot off the gas.

I won't be playing a total in this one. This is because this number feels too high, but playing it has an issue.

Alabama hasn't played enough consistent football this season. It was sloppy against Texas, committing double-digit turnovers. In its game against Utah State, it was careless with missed tackles and blocks, among other things. I think the urge to go vanilla early or pull the plug won't be as strong.

I've been a fan of playing these Unders where there is a more dominant side because they generally have a pattern. The dominant team goes up double-digit points early and then coasts to victory. That's usually conducive with the Under.

However, Alabama may go full throttle much deeper into the game than at other points of this season. Its coaching staff and players will want to deliver a complete game. That opens up the chance of Alabama going over the total entirely by itself alone.

Alabama is 5-0 ATS in their last five games after accumulating more than 450 yards in the previous game. Find more NCAA betting trends for Vanderbilt vs. Alabama. 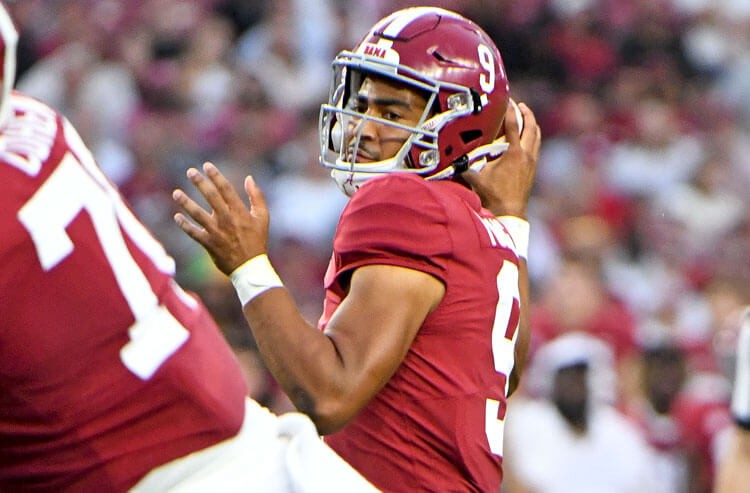 Vanderbilt vs Alabama Odds, Picks and Predictions: Improved Vandy Washed Away by the Tide
Provided by