The Sun Devils are monster 44.5-point favorites vs. a Thunderbirds team that got crushed by 31 points last week. Behind QB Jayden Daniels, can Arizona State cover and push the 55.5 total past the Over? Find out in our Southern Utah vs. Arizona State picks.

Fresh off a 31-point loss to the San Jose State Spartans, the Southern Utah Thunderbirds head to Sun Devil Stadium for a Thursday night showdown with the Arizona State Sun Devils.

The Sun Devils are one of the true contenders to win the Pac 12 this season, and they have one of the rowdiest crowds in the country — especially in night games. Will the Thunderbirds find a way to come close to hanging around in the desert against an Arizona team that's a 44.5-point favorite?

Find out in our Southern Utah vs. Arizona State picks and predictions for September 2.

Last week, the Thunderbirds gave up 410 passing yards in a blowout loss to the San Jose Spartans. Jayden Daniels, a legitimate sleeper to win the Heisman Trophy, isn’t quite the passer that San Jose State’s Nick Starkel is, but he’s pretty good in that regard while also being a dynamic runner. Daniels rushed for at least 83 yards in two of his four games last season and his dual-threat ability is going to be nearly impossible for this lousy Southern Utah team to defend.

Not only did the Thunderbirds get shredded through the air last week, but they also gave up 5.8 yards per carry on the ground. The Sun Devils had some offensive line issues a year ago, but that unit should be a bit better and is good enough to manhandle lower-tier competition. That means that both Daniels and Rachaad White, who led the nation with 10.0 yards per carry last year, should get going here.

All in all, it’s easy to envision a scenario in which this Arizona State offense marches up and down the field with little resistance — even if Badger, a potential breakout star at wideout, ends up sitting.

Defensively, the Sun Devils will miss Lole’s tremendous presence on the defensive line against Power 5 schools, but they should hold up just fine against the Thunderbirds. Southern Utah didn’t have a single 100-yard rusher in 2020, and the team averaged just 3.6 yards per carry against San Jose State last week. Considering Arizona State returns nearly every starter from last year, you should expect the team to similarly stifle its Big Sky opponent here. Herm Edwards isn’t going to tolerate a lackadaisical performance from his defense in a home opener, and his unit should feed off the energy of its fans.

The only concern in a game like this is whether or not the Sun Devils will ease up in the second half, but they are pretty deep with young talent that they’ll try to get some meaningful reps for. Those guys should have no trouble stepping in and keeping the train going.

If Arizona State is going to cover a 44.5-point spread, it’s going to be difficult for this game not to go Over the total. While the Sun Devils do return a lot of starters from last year’s team, it was a young group and they were just ninth in the Pac 12 in both passing and rushing yards allowed per game, meaning it’s not impossible that Southern Utah will put together a productive drive or two in this one.

Assuming the Thunderbirds can match last week’s 10-point performance, that would mean the Sun Devils would need to score at least 55 to cover this spread, putting them just a half a point away from this Over. However, a clean eight touchdowns would do the trick in getting ASU to 56, and this type of performance isn’t unprecedented. The Sun Devils scored 70 against rival Arizona last year and that’s a Power 5 school — even if the Wildcats didn’t play like one under Kevin Sumlin.

Also, Arizona State has overlooked some of its early-season opponents since Edwards took over, with the team only beating Sacramento State by 12 in 2019. Look for Edwards to stress the importance of a solid performance in this one and don’t be surprised if the Sun Devils score something like 63. This is a game where offensive coordinator Zak Hill can really flex his muscles and show off his creativity.

Did you know that if you parlayed today’s Southern Utah vs. Arizona State picks, you could win $26.45 on a $10 bet? 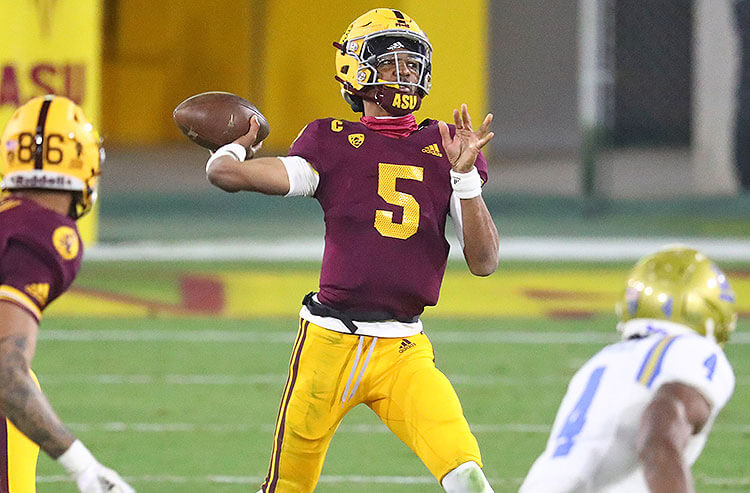