Justin Fields is gone but the beat marches on for new starter C.J. Stroud and Ohio State. The Buckeyes' new QB kicks off the 2021 season on the road against a pesky Golden Gophers squad, but we're expecting OSU to pick right up where it left off in 2020.

Ohio State marched to the CFP Championship last season, eventually losing to Alabama in a game, where its defense just couldn’t get a stop.

However, it was able to stop most of the Big Ten competition to get there and debuts in 2021 as massive college football betting road favorites against Minnesota, which has started making some noise in the conference.

Minnesota struggled with COVID issues in 2020 but still clawed out three conference wins behind a strong (returning) QB and RB. The Gophers have enough talent to give Ohio State a slight scare but can they really hang with the No. 4 team in the nation?

Find out in our Ohio State vs. Minnesota picks and predictions for Thursday, September 2, with kickoff scheduled for 8:00 p.m. ET.

Minnesota is 7-1 ATS in their last eight games as a home underdog of 10.5 points or greater. Find more NCAA betting trends for Ohio State vs. Minnesota.

Ohio State went to the National Championship last year and, as a result, it lost quite a few players to the NFL Draft — including their star quarterback Justin Fields. The Buckeyes announced that C.J. Stroud will get the starting job at QB, and he’s going to be blessed with plenty of talent at wide receiver. The Buckeyes are returning Chris Olave, who had 50 receptions last season, along with Garrett Wilson who had 43 receptions a year ago.

Both wideouts averaged more than 14.5 yards per catch and secured a combined 13 touchdowns — while totaling nearly 1,500 yards between the two of them in what equated to a half season's worth of games.

This bodes well for Ohio State, as Minnesota was statistically awful on defense last season. Again: It ran into a bunch of COVID issues and was missing players here and there in many games last season. But with all of those issues behind this team, the Gophers are going to be better on both sides of the ball in 2021.

Minnesota is deeper than it has been in years past and with QB Tanner Morgan and RB Mohamed Ibrahim returning, the offense still looks bright — even with WR Rashod Bateman departing for the NFL.

Of course, Minnesota will want to make Stroud uncomfortable in his first career collegiate start. Expect to see the Gophers send the blitz and do whatever they can to force a turnover, but it’s just hard to think that Stroud will feel uncomfortable with the amount of talent he has surrounding him.

Ohio State’s defense will be one of the top units in the country and while Minnesota has familiar faces on offense, it has a new offensive coordinator in Mike Sanford.

Sometimes with new coaches, it’ll take time to get things right — and it’s not really fun debuting a new offense for the first time against a program at the level of Ohio State.

I’m not confident in Minnesota’s offense but love what Ohio State brings to the table. Ohio State scored 38 or more points in every Big Ten game except for one, which was against Northwestern.

Everything I’ve been reading has been positive when it comes to Stroud. Ohio State media believe he has what it takes to compete for the Heisman Trophy. It seems like his teammates believe and trust him. He’s got big shoes to fill after Fields took this team to the National Championship... but he’s got all of the tools to help this team get back there this year.

Right now, I’m not trusting Minnesota’s offense against Ohio State. I’m just not going to do it. The Golden Gophers might have a couple of big plays but they won’t have much consistency. However, I think the Buckeyes will go on a rampage on the road.

Always remember to look for numbers that make sense. Don’t get caught taking an over of 25.5. When will you ever see a team consistently score 26? Today, 41 is a reasonable number — if Ohio State scores five touchdowns and two field goals, we're cashing Over the 40.5 total. Or it could score six touchdowns, which is a win for us too.

Either way, we're banking on the Buckeyes putting up a BIG number. 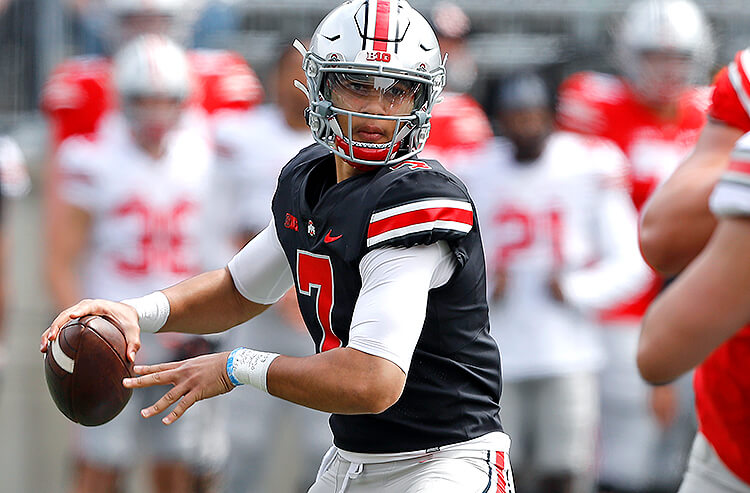