There is still uncertainty under center for the Spartans, but they can depend on a deep WR corps and an improved defense. Our picks and predictions break down whether that will be enough for MSU to upset favored Northwestern for a second straight year.

Big Ten conference action continues with a Week 1 showdown between the Michigan State Spartans and the Northwestern Wildcats.

Northwestern will look to build upon a strong 2020 season in which they finished 7-2 and claimed the Big Ten West division title. Aside from the Big Ten Championship Game, the only blemish on their record was a 29-20 defeat to the Spartans. They entered that matchup 5-0 only to fall vs. the slumping Spartans. The Wildcats will come out of the gates hungry in this spot, but will that be enough?

Check out our college football betting free picks and predictions for Michigan State vs. Northwestern on Friday, September 3 and find out.

The road team is 14-3 ATS in the last 17 meetings between these two teams. Find more NCAA betting trends for Michigan State vs. Northwestern.

The 2021 season will be a monumental test for Northwestern head coach Pat Fitzgerald. The Wildcats enter this contest returning only 34 percent of their production from last season, good for 126th in the country. In a season in which nearly every team returns a wealth of experience, they return only nine starters and will be one of the least experienced teams in the country.

Counting Fitzgerald out without a second thought would be a fool’s errand, however, as he has routinely frustrated bettors who discount his team’s chances. He’s earned the respect of college football bettors and for good reason. That being said, he has as tough of a task as any coach in the country this season.

Despite being a former five-star recruit, Northwestern’s new starting quarterback, Hunter Johnson, was last seen in 2019, when he completed only 46.3 percent of his passes and compiled an unseemly 1:4 touchdown to interception ratio. Running back Cam Porter, assumed to be the focal point of the offense this season, suffered a season-ending leg injury in mid-August. The defense also must replace the vast majority of their top performers.

The Spartans, meanwhile, will be hoping for improvement in year two under Mel Tucker after finishing with a 2-5 record a season ago.

They return 17 starters and will rely on a veteran offensive line that returns all five starters and a dangerous receiving corps led by Jalen Nailor and Jayden Reed.

The defense will hope for improvement in their second year implementing Mel Tucker’s 4-2-5 scheme.

We’re taking the points with Michigan State given that Northwestern is breaking in so many new starters and gets a conference game right out of the gate.

The total is low, sure, but it’s too hard to go with an Over when both teams may be breaking in a new quarterback for the first game of the season.

We’ve already mentioned Hunter Johnson’s struggles, but quarterback play will be unknown for Michigan State as well. They’ll roll with either Temple transfer Anthony Russo or the incumbent Payton Thorne under center. The fact that they haven’t named a starter yet and it’s already game week isn’t inspiring for Over bettors.

Neither team possesses a high-flying offense. These are both hard-nosed, defensive-oriented programs. They combined to average just under 43 points a season ago, and they’ll be working out the kinks as they try to shake off the rust of a long offseason.

Expect Northwestern to stick to their guns (the rushing attack and the defense) and for Michigan State defense to look improved in the second year of Mel Tucker’s 4-2-5 scheme.

Unders are usually the way to look at totals in Week 1 of the college football season unless you have a compelling argument for points.  We’ll take the Under.

Did you know that if you parlayed today’s Michigan State vs. Northwestern picks, you could win $27.27 on a $10 bet? 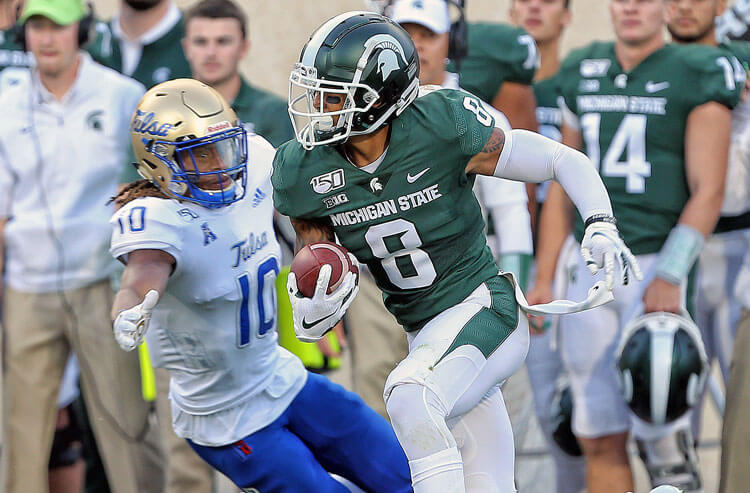