It will be a classic offense versus defense college football betting matchup when the Ole Miss Rebels meet the Indiana Hoosiers in the Outback Bowl.

The Rebels have one of the most potent offenses in the country, but they’ll be in tough against the Hoosiers, who have proved their doubters wrong all season long and have been one of the best bets in college football.

Here’s a look at our best college football free picks and predictions for the Outback Bowl between Ole Miss and Indiana. Kickoff is scheduled for Saturday, January 2 at 12:30 p.m. ET.

It looks like it will be a dreary day for football in Tampa. The forecast is calling for mostly cloudy skies with a very slight chance of showers. There is also expected to be an 11-13 mph wind gusting towards the north end zone. Be sure to monitor the gametime conditions with our NCAA football weather info.

Ole Miss is 5-0 ATS in its last five games against teams with a winning record. Find more NCAA betting trends for Ole Miss vs. Indiana.

Indiana has been one of the best stories in this topsy-turvy 2020 college football season. The Hoosiers went 6-1 straight up, with the lone loss coming to Big Ten champion and College Football Playoff entrant Ohio State, losing by just a touchdown as 21-point underdogs.

In fact, the Hoosiers also went a perfect 7-0 ATS this season, despite losing quarterback Michael Penix Jr. to a season-ending knee injury following their loss to the Buckeyes, which includes an outright win over Wisconsin as 12-point pups.

The Hoosiers have done most of this with their defense, which ranks 36th in total yards and gives up just 19.7 points per game. Indiana also has a nose for the football, ranking second in the country in takeaways per game. But it will have its hands full with Ole Miss, who will be the only offense Indiana has faced this season that’s comparable to Ohio State.

Lane Kiffin wasted no time implementing his offense as the Rebels are as high-octane as they come. They rank third in total yards and have done so with balance, ranking sixth in passing yards per game and 20th on the ground, which led to 41.7 points per game.

Ole Miss will be down two of their top pass catchers in WR Elijah Moore and TE Kenny Yeboah, who are opting out to prepare for the NFL Draft, but as long as quarterback Matt Corral and running back Jerrion Ealy are available, the Rebels will be dangerous.

Corral had a fantastic year, throwing for 2,995 yards with 27 touchdowns and 14 interceptions while adding another 469 yards and four scores on the ground, while Ealy ran for 745 yards and nine scores. Keep an eye on Ealy's status for this one: he suffered an injury late in the year. If he's good to go, Ole Miss should be able to move the ball against Indiana.

Yes, Indiana has been a great story, but sophomore QB Jack Tuttle’s inexperience could show here, and defensive coordinator Kane Wommack has his foot out the door after already accepting the South Alabama head coaching job. Ole Miss keeps this one close.

The total for the Outback Bowl opened as high as 69 at some sportsbooks and has promptly been bet down to 66 as of Thursday afternoon. But even that feels high for an Indiana game. The Hoosiers only played in one other game with a total resembling this and it was against Ohio State with a total of 67.5. That game went Over of course, but that was with Penix Jr. under center.

Ole Miss has a porous defense that ranks dead last in the country by allowing 535.7 yards per game, but Tuttle, while flashing some potential, has thrown just 38 career Division I passes and averages just 4.0 yards per attempt. The running game hasn’t helped out much either, as the team’s 3.1 yards per carry ranks 116th in the nation—Penix Jr. was able to make up for a lot of Indiana’s flaws with his creativity and ability to extend plays.

You also must respect the fact that it seems unlikely the Rebels get to their season scoring average without their top two pass catchers against a very good Hoosiers defense. As a result, this one seems unlikely to go above the number. 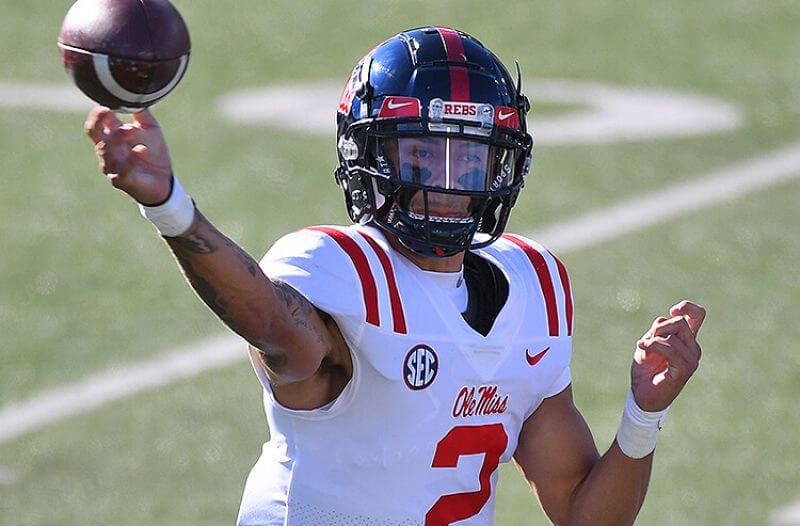