Not two weeks ago, the Spartans were making a great case for a Playoff spot - now they're near three-touchdown underdogs against Ohio State. Our preview suggests that's simply too many points - read more in our Michigan State vs. Ohio State picks.

Ohio State is back in the top four of the College Football Playoff rankings with eight straight wins since losing to Oregon earlier in the year. On the other hand, Michigan State was in a prime position to steal a spot in the Playoff until a loss to Purdue derailed that idea.

If Michigan State wants a chance at the College Football Playoff along with a shot at the Big Ten Championship, a win over Ohio State, on the road is a necessity. Do the Spartans have it in them?

Here are our picks and predictions for a premier Big Ten matchup between Michigan State and Ohio State.

Ohio State opened way earlier in the season as a 27-point favorite. However, you can now find the Spartans as a 19-point underdog and as low as 18.5.

The total has moved from 68 to 66.5 at some outlets. Use the live odds widget above to track any future line movements right up until kickoff and be sure to check out the full college football odds before placing your bets.

Spartans are 5-0-2 ATS in their last seven games after allowing more than 450 total yards in their previous game. Find more NCAA betting trends for Michigan State vs. Ohio State.

Michigan State has lost just one game all year playing the exact competition as Ohio State. Yet, Ohio State is nearly a three-touchdown favorite, at home against Michigan State.

At first glance, it just seems like way too many points. Michigan State is averaging just under 450 yards on offense and while the defense has allowed nearly 450 itself, they’ve still got plenty of potential and playmakers on the defensive end, including a defensive line that has stepped up countless times.

The coverage is starting to break a bit and the tackling has been a bit off for Michigan State, but overall, the defense does a lot of great things.

Offensively, the Spartans are led by Payton Thorne who has thrown for 21 touchdowns along with eight interceptions. However, the big name and potential Heisman candidate, Kenneth Walker III has made the most of his new opportunity with Michigan State, totalling 17 touchdowns with 1,473 yards on 227 attempts this season. The running game has been fantastic and could be a factor against Ohio State.

The Buckeyes, on the other hand, have lacked in coverage more so than Michigan State has this season. Tackling hasn’t been as big of a problem for Ohio State but it’s still a little of a struggle this season.

Ohio State also has one of the top Heisman candidates in C.J. Stroud, who has thrown for 30 touchdowns on the season with just five interceptions. And that’s with missing some action due to injury earlier in the season.

Stroud has a ridiculous number of playmakers around him and they make his job extremely easy. However, Michigan State will stick around in this game offensively as well and keep this within reach.

Both of these defenses are terrific, but these offenses are even better. Michigan State has one of the best running games in the nation behind Heisman hopeful Kenneth Walker III and Ohio State has developed C.J. Stroud into a premier quarterback in college football.

With the caliber of these two offenses, 67 seems like a low number. If each team scores five touchdowns, this game goes Over, and I think that’s likely for two teams that literally average five or more touchdowns per game.

Ohio State is undefeated in conference play while Michigan State has one loss. A win against Ohio State would leave the two teams tied in first place with another game to play before the Big Ten Tournament game.

Back Michigan State to stick around. 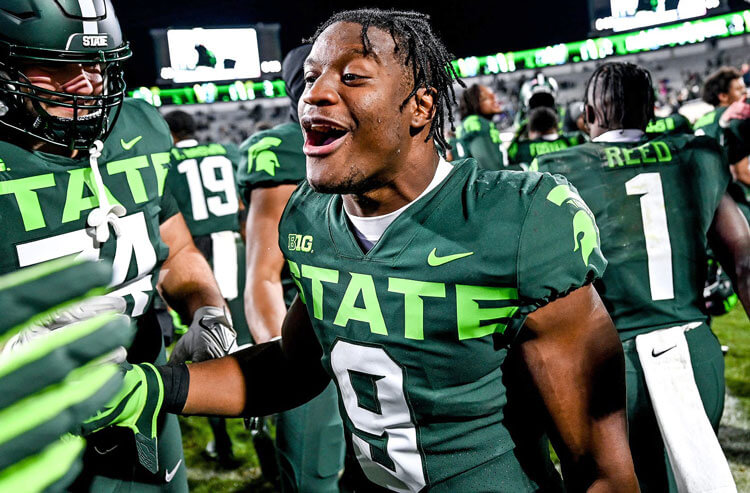