Wake Forest vs Clemson Picks and Predictions: Could This Be Clemson's Turning Point?

Clemson is hosting Wake Forest's high-powered offense as a 4.5-point favorite in what might be the Tigers' final chance to impress the college football universe. See how it all plays out in our college football betting picks for Wake Forest vs. Clemson.

All year, critics have been talking down on Clemson. It’s deserved as Clemson has uncharacteristically lost three games this season. However, at 7-3, they’ve managed to somewhat stay afloat in 2021.

The way Clemson is winning hasn’t been nearly as dominant, but Clemson still has seven wins and could end up playing in a big-time bowl game later this year. That will only happen if the Tigers can bring down a Top 10 opponent, and lucky for them, they’ve got one this week in the Wake Forest Demon Deacons.

What will be showcased more between Wake Forest’s offense or Clemson’s defense?

Clemson opened as a 3.5-point favorite and has actually been bet up to a 4.5-point favorite, at home. The total has seen a little more line movement from 54.5 at open to 57 currently. There’s a 57.5 floating around at a couple of outlets at this time. Use the live odds widget above to track any future line movements right up until kickoff and be sure to check out the full college football odds before placing your bets.

Tigers are 0-6 ATS in their last six games after allowing less than 20 points in their previous game. Find more NCAA betting trends for Wake Forest vs. Clemson.

Wake Forest has had a much better season in comparison to Clemson. However, oddsmakers and sharp bettors don’t see it that way moving forward. The line has shifted in favor of Clemson going from a 3.5-point favorite to a 4.5-point favorite.

The Wake Forest defense looks shot as of late. In the last two games, the Demon Deacons have allowed 42 or more points. However, the offense has also scored 45 or more points in each game and hasn’t scored less than 30 points in any game this season.

That high-powered offense is led by quarterback Sam, who has passed for 30 touchdowns and 3,163 yards. He’s also been huge for this team on the ground along with Christian Beal-Smith who has averaged five yards per carry on 107 attempts this season. Beal-Smith is currently questionable for this game, however.

Clemson, on the other hand, has looked miserable on offense. The Tigers have scored 30 or more points in their last three games against Florida State, Louisville, and Connecticut, but overall, the offense has been forgettable.

Clemson has averaged just 24.4 points per game with 344.7 yards per game. While things are improving, it’s too little, too late. Wake Forest has a solid coverage unit and should be able to get stops against Clemson in this game.

It’s hard to say the same for Clemson’s defense against this Wake Forest offense, however.

Army even scored 56 in a game where Wake Forest scored 70 points. It’s always a shootout with this team regardless of the offense. So, when I see a 56.5 with Wake Forest, it’s a no-brainer for me. I’ll take the Over, knowing that the Demon Deacons could hit this number themselves.

Plus, Clemson’s offense has shown signs of improvement as of late, and with another strong showing this week, the 56.5 number could get toppled pretty easily.

I’ll stick with the Over as my best bet. Wake Forest really has no flaws on the offensive end and while Clemson has held teams to 15.3 points per game, they’re going to have trouble seeing that kind of success against Wake Forest.

There’s also nothing elite about this Clemson defense. They do a bunch of things very well, but this isn’t a Georgia or Wisconsin-level defense. A couple of weeks ago, Louisville found a way to score 24 and Pittsburgh dropped 27 against Clemson back in late October. There’s reason to think Wake Forest could easily get to 30 points in this game.

On the flip side, Clemson’s offense is starting to see some progression after scoring 30 points in each of their last three games. The opponents Clemson faced weren’t anything special, but neither is Wake Forest’s defense, which has really struggled as of late. 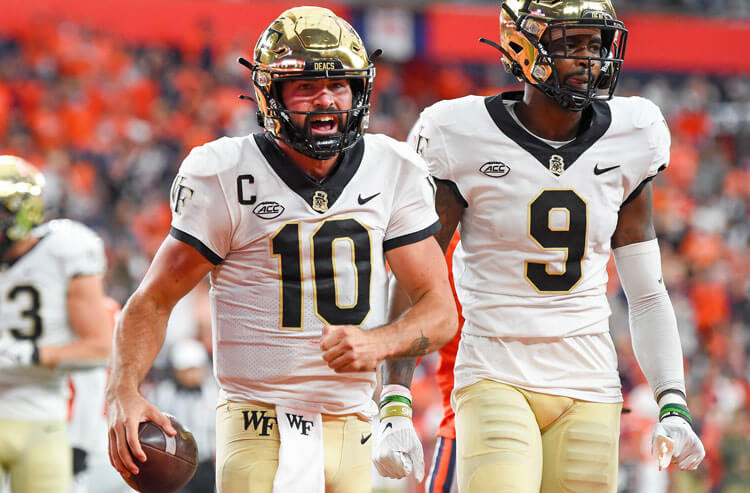 Wake Forest vs Clemson Picks and Predictions: Could This Be Clemson's Turning Point?
Provided by