Arkansas vs Alabama Picks and Predictions: Hogs Can Run From Rumbling Tide

Bama has the motive to win and punch its ticket to the conference championship, but covering 20+ points against the Razorbacks may not prove a simple task. Find out if they can with our college football betting picks for Arkansas vs. Alabama.

The Alabama Crimson Tide need to win one of their last two games to clinch the SEC West and clinch a spot in the conference championship game. First up is a date with the Arkansas Razorbacks.

Bama is a large 20.5-point college football betting favorite for this SEC matchup, but there have been some cracks showing in the Tide's shining armor. Meanwhile, the Hogs come into this game with growing confidence and have already pulled off some upsets on the campaign.

Find out who we're backing with our free college football betting picks and predictions for Arkansas vs. Alabama on Saturday, November 20.

Alabama hit the board for this SEC matchup as a 20.5-point home favorite and that’s where the line remains as of Friday night. The total has seen a little more action, being bet up from the opening number of 56 to 58.

Arkansas is 6-2 ATS in its last eight games as a road underdog. Find more NCAA betting trends for Arkansas vs. Alabama.

Arkansas vs Alabama picks and predictions

This game is a little difficult to figure out from a spread perspective because it’s not hard to see this game going a bunch of ways.

It wouldn’t be shocking to see Alabama earn a 45-20 victory thanks to the arm of Bryce Young and the dangerous Tide passing game. But Bama has shown some flaws recently. (The game against New Mexico State doesn’t count).

The Tide rushed for just six yards in a tight win over LSU two weeks ago. It took them until the fourth quarter to pull away from Tennessee, and of course, lost to Texas A&M.

Meanwhile, Arkansas comes into this game with confidence and the style of play to give Alabama problems. The Razorbacks have won three in a row, which includes solid wins over LSU and Mississippi State. And of course, the Hogs actually beat Texas A&M this year.

The Razorbacks will try to earn the massive upset over Alabama with their power running game and stout defense.

Dual-threat quarterback KJ Jefferson is an absolute truck and leads a Razorbacks rushing attack that rumbles from more than 230 yards per game. Meanwhile, if there is a defense in the SEC outside of Georgia that can stand up to the Crimson Tide’s passing game, it’s Arkansas. The Razorbacks rank 24th in the country, allowing just 195.7 passing yards per game.

If Alabama isn’t able to get its running game right in this one and Arkansas can get Young into a bunch of third and longs, the Hogs should be able to put enough pressure on him to force some tough throws, while the offense should move the ball enough to keep this game close.

When it comes to the total, the early money has been on the Over, but that may have put the number high enough to consider the other side.

For starters, we know that Arkansas is going to run the ball. A lot. They rank sixth in the country in percentage of running plays, and three of the teams ahead of them are the triple-option running service academies. But while they have had a lot of success running the ball this season, it will be tough sledding against an improving Alabama defense that ranks third in the country, allowing just 81.3 rushing yards per game.

On the other side, you know Nick Saban will try to establish the run game after running for just six yards against LSU a couple of weeks ago. And when the Tide do go to the air, they go against a solid Hogs pass defense. The Under looks like the better play here.

For the past couple of seasons, Alabama has been known for covering first-half spreads, particularly against SEC opponents. But that hasn’t been the case recently.

Bama is just 1-3 against the first-half spread in its last four conference games and it's averaging just 16.5 points in the first half over that stretch. Saturday, the Tide face an Arkansas team that is one of the best in the country in limiting opponents before the break, giving up just 11 first-half points per game.

At the same time, the Hogs are sort of slow starters themselves and score just 11.6 first-half points per game. That ranks 90th in the country. In a game that should be intense, there could be a feeling-out process early on. Bet the Under in the first half. 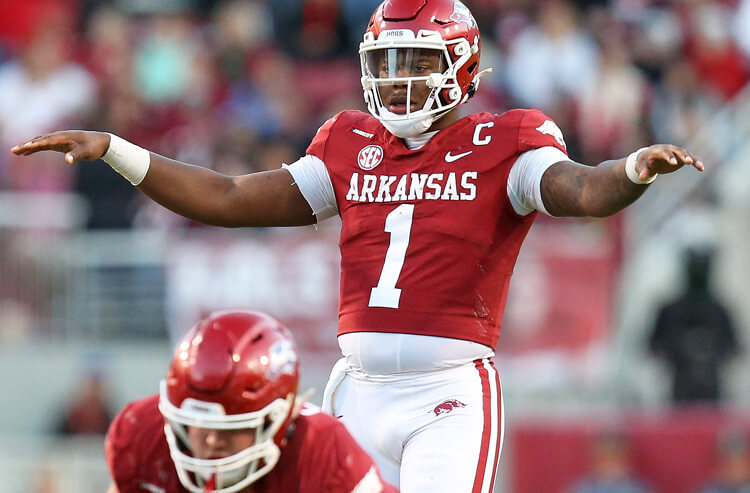 Arkansas vs Alabama Picks and Predictions: Hogs Can Run From Rumbling Tide
Provided by