Iowa State vs Oklahoma Picks and Predictions: Back The Cyclones In This Big 12 Clash

In a battle of two Big 12 powerhouses looking to get right after Week 11 losses, the Sooners host the Cyclones as small 4.5-point favorites. Find out who will bring their A-game in our Iowa State vs. Oklahoma picks and predictions.

On Saturday, the Oklahoma Sooners will look to bounce back from their first loss of the season when they host the Iowa State Cyclones. Both of these teams played poorly a week ago and it’ll be interesting to see which one of them will come out and perform at a higher level.

Are the Sooners staring down their second loss in a row? Keep reading our Iowa State vs. Oklahoma picks and predictions for the answer.

The total in this game was originally 59.5 at open, but we’ve now seen it rise to as high as 60.5. Meanwhile, Oklahoma was once a 5-point favorite in this game, but the Sooners are now laying as few as 3.5 points in this one. Use the live odds widget above to track any future line movements right up until kickoff and be sure to check out the full college football odds before placing your bets.

Iowa State is 10-1 against the spread in its last 11 games coming off a performance in which it gave up 40 or more points in its previous game. Find more NCAA betting trends for Iowa State vs. Oklahoma.

Both Iowa State and Oklahoma are coming off bad losses a week ago, as the Cyclones lost 41-38 as 12.5-point road favorites against the Texas Tech Red Raiders and the Sooners lost 27-14 as 4-point road favorites against the Baylor Bears. For Iowa State, the team’s hopes of playing in a good bowl game are shrinking by the week. However, the stakes were much bigger for Oklahoma, as Lincoln Riley’s team is now extremely unlikely to make the College Football Playoff.

This week, the Sooners look like they could be in danger of losing yet another game. The Cyclones might be coming off of a miserable performance against the Red Raiders, but Matt Campbell’s defense is giving up just 112.4 rushing yards per game. That’s the 18th-best mark in all of college football and the team can really give Oklahoma some trouble by slowing down the running back tandem of Kennedy Brooks and Eric Gray.

Last week, both Caleb Williams and Spencer Rattler struggled against the Bears and a lot of that had to do with the team not getting the ground game going. Baylor was able to force Oklahoma into a quite a few third-and-long situations, and that made the passing game too predictable. From there, the team got a lot of pressure on a Sooners line that can occasionally look completely porous. Overall, the blueprint is in place to slow down this Oklahoma offense. The Cyclones might not be able to prevent the Sooners from scoring a few touchdowns in this game, but they should be able to get some stops when they really need them.

As for the Cyclones offense, Breece Hall should have a field day running against an inconsistent Sooners defensive line. Hall has rushed for at least one touchdown in every single game this season, and he has a total of 18 touchdowns on the year. This Oklahoma defense is going to be no match for him, and quarterback Bryce Purdy will make defensive coordinator Alex Grinch’s group pay if it overcommits to the run.

Eight of the last 10 meetings between Iowa State and Oklahoma have gone Over the total. The Over is also 5-2 in the Cyclones’ last seven games and it’s 6-4 in the Sooners’ 10 games this season. Sure, Oklahoma was somewhat exposed in last week’s meeting with Baylor — and the team had been flirting with disaster throughout the year — but the Sooners are still going to put together a few successful drives in this game. The Cyclones are mostly capable of locking in and getting stops, but last week’s game against the Red Raiders proves that there are some flaws they’re working through.

Even after last week’s dud, Oklahoma is averaging 40.0 points per game this season. That’s better than all but seven FBS programs, and Iowa State is averaging 32.5 points per game. These are two very good offenses when rolling and that’s just part of the reason the Over looks so enticing here. The Over also happens to be 4-1 when Oklahoma is coming off an upset loss as a favorite under Riley.

In Iowa State’s last two trips to Norman, the Cyclones earned a 38-31 upset win as 30-point road underdogs in 2017 and they also lost 42-41 as 14.5-point underdogs in 2019. This team has not been intimidated when playing in Oklahoma, and both Purdy and Hall know what it takes to win a game like this. And make no mistake: Iowa State has what it takes to win this game outright. 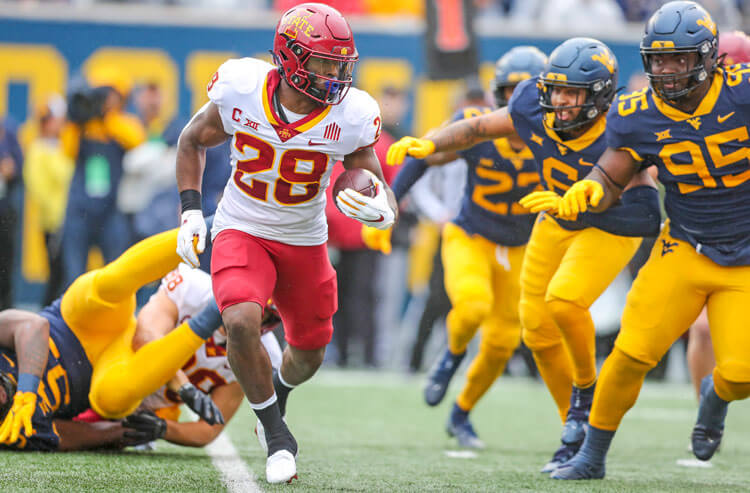 Iowa State vs Oklahoma Picks and Predictions: Back The Cyclones In This Big 12 Clash
Provided by