Kent State and Northern Illinois can both take advantage of each other's defense, but our preview suggests it might take another heroic performance from the Huskies to win it all this weekend. Read more in our Kent State vs. Northern Illinois picks.

It’s a tale of two underdogs as Kent State plays Northern Illinois Saturday at Ford Field with the MAC Championship on the line.

No one expected the Huskies to be in this spot a year removed from a winless season. A win Saturday would make them the only team in college football history to go from winless to conference champions in one season.

Kent State, meanwhile, is seeking its first conference title since the 1972 season.

Will Northern Illinois make history, or will Kent State taste some much-needed success?

Check out our picks and predictions for the MAC Championship game between the Kent State Golden Flashes vs. the Northern Illinois Huskies to find out.

Kent State is 4-0 ATS in its last four games as a favorite. Find more NCAA betting trends for Kent State vs. Northern Illinois.

While Northern Illinois’s turnaround has been one of the best stories in college football, we believe that the bus stops here. Success stories are great, but they don’t help cover point spreads. There’s a reason that no other team has gone from winless to conference champion in the span of one year — it’s very difficult to accomplish.

It always feels safer backing a veteran quarterback in a big game like this. Kent State’s attack will be led by program legend Dustin Crum, who’s closing in on 9,000 career total yards and has over three years of playing time under his belt. The offense hit its stride over the final stretch of the season, gaining over 450 yards in each of the last five games.

Northern Illinois doesn’t rate out particularly well in any category other than rushing offense. The passing offense sits at 98th, while the defense ranks 113th thanks to the 120th ranked rushing defense. Kent State will have a huge advantage when they have the football and should light up the scoreboard.

The final record looks nice, but a closer look shows that the Huskies were very fortunate to come away with an 8-4 record. Every single win against an FBS opponent came by only one score, and four wins were by two points or less. This is not the profile of a dominant conference champion.

These two teams did meet previously on November 3. Northern Illinois came away victorious 52-47 thanks to an otherworldly performance from quarterback Rocky Lombardi, receiver Trayvon Rudolph, and this passing attack. It’s difficult to see a repeat performance for several reasons. While the Golden Flashes are poor defensively, there have been notable signs of improvement since the outing of defensive coordinator Tom Kaufman in mid-November. That was also the Huskies' greatest passing yardage total in a game by nearly 200 yards. They eclipsed 300 yards passing in only one other game all year.

It’s hard to look at anything other than the Over given the state of both defenses. Northern Illinois ranks 113th defensively, allowing a whopping 453 yards per game. Kent State has managed to be even worse, ranking 124th while allowing 475.5 yards.

Kent State should be able to score points in bunches. Crum is a dangerous dual threat who has over 2,800 yards and 15 scores through the air and over 500 yards and 11 touchdowns on the ground. Receiver Dante Cephas emerged as the go-to guy out wide, eclipsing 1,000 yards while scoring eight touchdowns. The Golden Flashes also sport a 1,000-yard rusher in Marquez Cooper — their first running back to eclipse that barrier since 2012.

While Kent State’s defense has looked somewhat better lately, it’s difficult to ignore the ugly statistical numbers. The Huskies exploited their secondary in the first matchup while racking up four rushing touchdowns. It’s also worth noting that this game will be played indoors at Ford Field — prime conditions for a lot of points.

We’re riding with the Golden Flashes to be the 2021 MAC Champions.

They sport the conference’s best offense led by veteran quarterback Dustin Crum and should be able to put up points in bunches at Ford Field. We only need the defense to hold up its end of the bargain. Barring another outlier performance from the Huskies’ offense, we like our chances to cover.

Did you know that if you parlayed our Kent State vs. Northern Illinois picks, you could win $26.93 on a $10 bet? 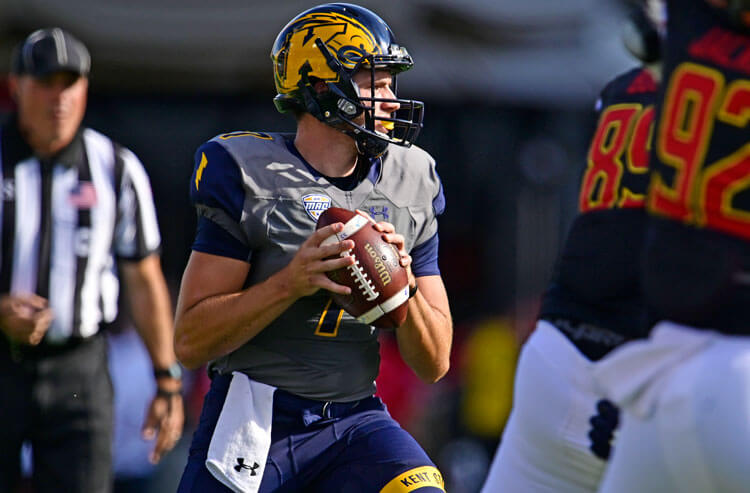