In a battle of top tier defense and below-average quarterback play, Iowa heads to Wisconsin for a pivotal Big Ten matchup. Iowa is coming off a bye, while Wisconsin comes off a road win at Purdue. Find out who to back in our Iowa vs. Wisconsin picks.

Just two weeks ago, the Iowa Hawkeyes were ranked second in the nation and looking to make the College Football Playoff. Now, they’re ranked ninth in the AP Poll and are only small favorites against a Wisconsin Badgers team that already has three losses on the year.

The Hawkeyes had a bye week last week and likely reflected on what each player could’ve done better in their loss against Purdue, 24-7. Meanwhile, Wisconsin has won their last three games and ironically, pounded Purdue, on the road 30-13 just last week. Now the Badgers will look to win its fourth straight, at home, against Iowa.

Here are our picks and predictions for the Big Ten matchup between the Iowa Hawkeyes and Wisconsin Badgers.

Wisconsin opened as a -3.5-point favorite and haven’t moved since. The total, on the other hand, hasn’t shifted either, still standing at just 36.5. There are one or two books carrying a 37, however. But either way, this has to be one of the lowest totals you will see all year in college football. The public is going to be riding the over, but the sharps are having trouble with this number.  Use the live odds widget above to track any future line movements right up until kickoff and be sure to check out the full college football odds before placing your bets.

The Iowa Hawkeyes have been road warriors, going 5-0 ATS on the road in their last five games. The Hawkeyes got a break last week while Wisconsin beat up Purdue, on the road, 30-13.

While the Hawkeyes are rested, the Badgers have momentum.

Wisconsin likely has one of the best rushing defenses in America and have played well above average in coverage and with their pass rush.

The big thing for Wisconsin is trying to score rushing the football. However, it’s going to be a struggle against Iowa. The Hawkeyes are allowing just 89.7 yards per game on the ground this season.

The Badgers just don’t have a quarterback capable of making big plays down the field. Graham Mertz has two touchdown passes with seven interceptions on the year. Against Iowa, if Mertz needs to throw the ball, a turnover will be waiting to happen. Iowa has one of the best secondaries in all of football.

Both offenses are very similar, however, as Spencer Petras isn’t all that either. With nine touchdowns and six interceptions, Petras has at least out-performed Mertz. Therefore, I’ll roll with Iowa to keep things close and at least win against the spread.

Who doesn’t want to brag about winning a college football bet by betting a pre-game under of just 37 points? The entire public will look at this number and think it’s way too low.

Instead, it’s set high. I know this sounds crazy but, again, both defenses are as elite as it gets. Both offenses have borderline capable starting quarterbacks, and these offenses are going to want to minimize the damage with their quarterbacks and run the football.

Petras and Mertz have combined for 13 interceptions this season. In such a tight and close game, both offenses will look to run the football. With that, neither team is going to get far.

You’re going to be sweating throughout the game, but the under is seriously the play. 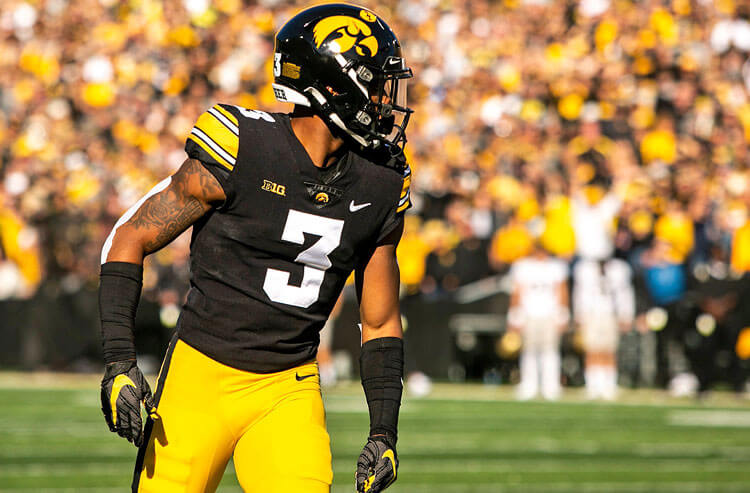