Texas vs Baylor Picks and Predictions: Baylor's Defense The Only Thing Separating These Teams

Defense will be the difference in this Big 12 matchup featuring two strong offenses, so which team will have the edge? Find out with our college football betting picks for Texas vs. Baylor.

While not expected, the Baylor Bears are Texas's best team in the Big 12 this season. Dave Aranda's squad is tied with the Cowboys and Cyclones for second in the conference, with all three vying for a date with the Sooners in the conference championship.

To help their cause, the Bears are going to need a hard-earned win over the Texas Longhorns on Saturday. Find out if they can do it in our Texas vs. Baylor picks and predictions.

Baylor went from a 2-point favorite in this game to a 3-point favorite on nearly every sportsbook. You can still find the number at 2.5 if you look hard enough, though. The total in this one opened at 62 and is now down to 61 or 61.5. That number is moving in the opposite direction of action, as the majority of tickets are on the Over. Use the live odds widget above to track any future line movements right up until kickoff and be sure to check out the full college football odds before placing your bets.

Baylor is 5-1 ATS in its last six games as a home favorite. Find more NCAA betting trends for Texas vs. Baylor.

Last year, Texas earned a 27-16 victory over Baylor as an 11-point favorite in Austin. This was the Longhorns’ fifth victory in its last six meetings with Baylor. The Bears did, however, win the last time these two met at McLane Stadium, where Baylor earned a 24-10 win as a 3.5-point favorite on November 23, 2019. The Bears are hoping their home fans can make a difference once again, but they might not need them. This Baylor team is arguably better than Texas.

Texas has one of the most explosive offenses in the country, as the Longhorns are averaging 41.6 points per game this season. However, the Bears aren’t all that far behind at 38.3 points per game. Baylor also happens to be the team that plays the better defense, as the Bears are giving up only 18.7 points per game while the Longhorns are allowing 29.6 points per game. It’s Baylor’s passing defense that is the strength of the unit, too. The Bears bend but don’t break, and they’ll be looking to make sure they don’t let any Texas receivers get behind them for long touchdowns. Running back Bijan Robinson can really hurt the Bears on the ground, but Baylor will be fine if Texas isn’t making big plays in the passing game.

On offense, Baylor has a Top-10 rushing attack in the country. That’s going to be massive when considering that Texas’ losses have all shared one common theme: The Longhorns gave up at least 220 yards in all of them. The Arkansas Razorbacks, Oklahoma Sooners and Oklahoma State Cowboys all ran all over Texas’ defense, and that allowed them to tire the Longhorns out and simply control the game. This Baylor team is capable of doing the very same thing, which is why you should expect big things out of running backs Abram Smith and Trestan Ebner here. Even quarterback Gerry Bohanon could get in on the action, and his dual-threat ability is another reason this Bears team should win this one.

As previously mentioned, Baylor has a defense that does what it can to limit big plays. It’s not always perfect, but the Bears are going to be especially careful when facing this Longhorns offense, as Steve Sarkisian is going to want quarterback Casey Thompson to take shots down the field. And while Robinson is one of the best running backs in the country, Baylor is going to be hoping that Texas runs the ball more often than not here.

Meanwhile, the Bears are going to try to shred the Longhorns on the ground in this one. With that, the chains are going to move, and the clock is going to run. That would limit the number  of points that can be scored in this game, making the Under a solid play.

The Under has hit in each of the last eight meetings between Texas and Baylor, so it’s not like a lower-scoring game between these teams is unprecedented. Also, over the last three years, the Under is 4-1 when Baylor is coming off a bye week. Aranda is one of the brightest defensive coaches on the planet, so an extra week is a lot for him to help his defense prepare. 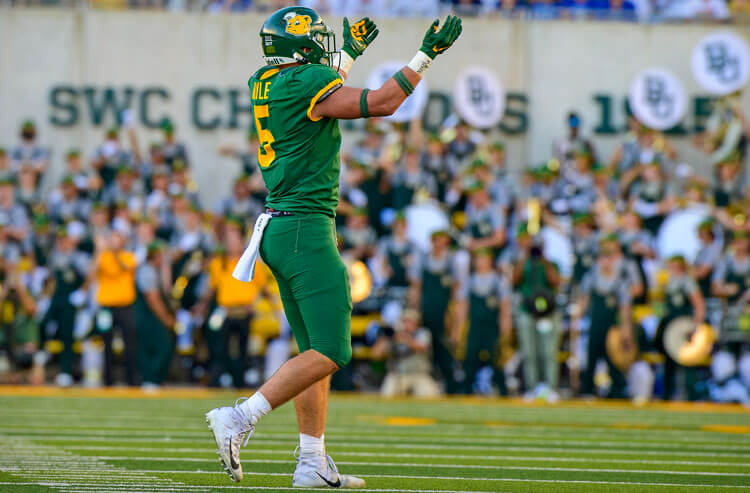 Texas vs Baylor Picks and Predictions: Baylor's Defense The Only Thing Separating These Teams
Provided by