The longhorns need a get-right spot like it's nobody's business and just took a huge injury hit. Find out if they have enough left in the tank as we preview this game with our Texas vs. West Virginia college football betting picks.

The West Virginia Mountaineers and Texas Longhorns clash in a meeting between two struggling Big 12 teams on Saturday. The Longhorns have lost five games in a row coming into this contest, while the Mountaineers have lost two straight.

Will Steve Sarkisian’s team find a way to keep itself in bowl contention with a win in Morgantown? You won’t want to skip our Texas vs. West Virginia picks and predictions for Saturday, November 20, so check it out below.

The total in this game opened at 57 and has since gone down to 56.5 on some books, despite most people seemingly betting on the Over. As for the spread, Texas was a 2.5-point favorite when this thing opened, but West Virginia is now favored by anywhere from one to three points. The huge line move came when Bijan Robinson was announced as out.

Texas is 4-1 against the spread in its last five games when coming off a game in which the team scored 40 or more points.  Find more NCAA betting trends for Texas vs. West Virginia.

Believe it or not, the road team has covered in each of the last five meetings between Texas and West Virginia, and the road team has actually won outright in four of those contests. This week, the Longhorns will have to find a way to win without star running back Bijan Robinson, but it’s not like Texas doesn’t have any talent left in the backfield. Sarkisian has a number of guys he can throw back there and expect decent play from, so this running game won’t completely fall by the wayside without Robinson.

Casey Thompson will, however, have much more responsibility for this Texas team moving forward. Fortunately for Longhorns fans — and bettors — Thompson is more than capable of delivering. This season, the dual-threat signal-caller has thrown for 1,914 yards with 23 touchdowns and only seven picks. He’s also rushed for 148 yards and four touchdowns. His playmaking ability is going to be a huge problem for a Mountaineers defense that has allowed at least 31 points in three of the past five games.

Defensively, Texas has a ton of question marks after giving up 57 points in a loss to the Kansas Jayhawks. It is, however, somewhat simple preparing for this West Virginia offense. The Mountaineers rely heavily on running back Leddie Brown, so the Longhorns can really make things rough on their opponents if they are keying in on the run. West Virginia quarterback Jarret Doege has had a few big games throughout his career, but he’s not exactly an outstanding pocket passer or anything.

Overall, the Longhorns are in a bad way at the moment, but this matchup suits them rather well. This is a good chance for them to end their slide.

Despite the fact that a large majority of bettors are flocking to the Over in this game, the number has actually gone down since this total first became available. That likely means that there is a lot of sharp money coming in on the Under, and you’ll definitely want to side with that action in a game like this.

Texas might be coming off a disastrous defensive outing last week, but these two teams combined to score only 30 points when they played last year. Each of West Virginia’s last two games also would have gone Under the total in this game, and the Mountaineers just don’t have the type of offense required to help Over bettors win in this one.

It’s also worth noting that both of these teams will be working hard to get into the backfield on defense. Whether it’s Texas trying to slow down Brown and the West Virginia running game or the Mountaineers trying to put pressure on Thompson, any tackles in that area of the field will help the clock run.

The Under is a bit riskier than rolling with Texas in this game, as the Longhorns are just so explosive offensively and did just struggle to contain the Jayhawks, who have been the laughingstock of the Big 12 in recent years. Texas is, however, the much better offensive team — even without Robinson — and should be able to get a few more of the bigger stops in this one. That makes them the better play between these two programs. 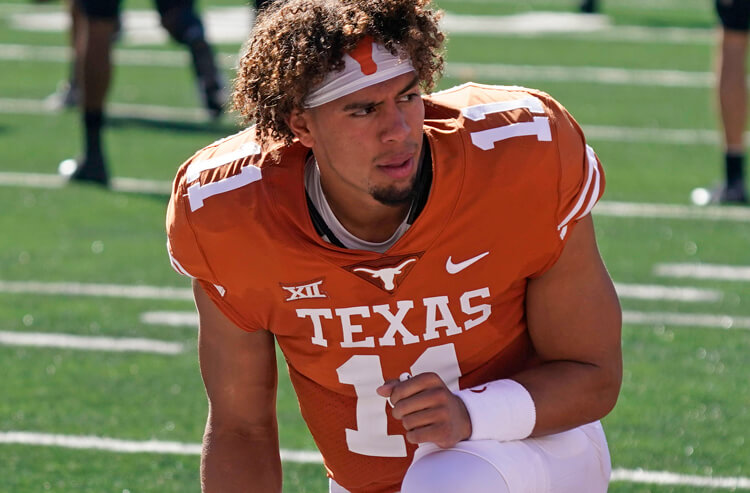