Georgia vs Georgia Tech Picks and Predictions: Yellow Jackets No Match for Bulldogs

All signs in this year's Georgia-Georgia Tech matchup point to another Bulldogs blowout, but can they cover the huge number on the road? Find out in our Georgia vs. Georgia Tech picks and predictions.

On Saturday, college football fans will be treated to some “Clean, Old-Fashioned Hate” when the Georgia Tech Yellow Jackets host the Georgia Bulldogs in one of the sport’s greatest rivalries. Georgia, which is in control of the top seed in the College Football Playoff, has won each of the last three in this head-to-head series.

Are the Bulldogs going to roll to a victory in Bobby Dodd Stadium? Read our Georgia vs. Georgia Tech picks and predictions to get a better idea.

This battle in Atlanta opened with Georgia as a 35-point favorite, and it hasn’t moved all that much. Despite a large majority of the bets coming in on the Bulldogs, the team is now laying 35 or 35.5 everywhere. The total in this one opened at 54.5 and is now either 54 or 54.5 across the board. That’s despite the majority of bets being on the Over.  Use the live odds widget above to track any future line movements right up until kickoff and be sure to check out the full college football odds before placing your bets.

Georgia Tech has some real offensive talent on its roster, with running back Jahmyr Gibbs being the headliner. Gibbs is as talented as anybody in the country at his position, and he’s always a threat to make a big play. However, this Georgia defense is only allowing 77.2 rushing yards per game, which is the second-best mark in the nation. The Bulldogs will be locked against the run in this game, as they know that Georgia Tech isn’t going to be much of a threat passing the ball. So, while the Yellow Jackets might score some points in this game, it’s hard to see them doing enough to keep up with this Bulldogs’ offense.

Meanwhile, the Bulldogs are going to have no trouble scoring in this game, even with some banged-up receivers. With Zamir White and James Cook in the backfield, Georgia has the running game to really shred Georgia Tech on the ground. The two of them have combined to rush for 1,201 yards and 17 touchdowns this season, and they now face a Yellow Jackets defense that is giving up 178.8 rushing yards per game. Georgia Tech has also allowed 17 touchdowns on the ground this year.

With the running game rolling, things should be easier on quarterback JT Daniels. Daniels has been banged up for most of the year, but he is now healthy enough to move in front of Stetson Bennett as Georgia’s starter. Daniels has a big arm and should really be able to make some plays against this Yellow Jackets defense. The threat of the run is only going to open up the field for him to use his arm.

Georgia’s defense has arguably been the best in all of college football, and that has somehow allowed this Bulldogs offense to fly under the radar. However, offensive coordinator Todd Monken is doing a tremendous job with this team, as the Bulldogs are averaging 43.3 points per game in the nine games since putting up only 10 in the season opener. With Georgia playing that well on offense, it’s extremely hard for low totals like these to go Under. That’s part of the reason the Bulldogs have gone Over each of the last two weeks.

The Yellow Jackets have also given up at least 33 points in five of their last seven games, so it’s not like this Georgia Tech defense will offer much resistance against Georgia. On top of that, Geoff Collins’ team has a lot of talent on the offensive side of the ball, so it wouldn’t be shocking if they did find the end zone a couple of times here.

It should also be noted that three of the last four games in this rivalry have gone Over the total.

Considering these teams have averaged 56.3 points per game over their last four meetings, it doesn’t seem outrageous to expect at least another 60 when they clash on Saturday. This Bulldogs offense is humming right now, as it averaged 42.0 points per game in victories over the Missouri Tigers and Tennessee Volunteers in the two weeks before putting up 56 in a win over FCS Charleston Southern last week.

Considering what the Bulldogs have done against SEC competition this year, it should be expected that they’ll score at will against this lousy Yellow Jackets defense. Since Kirby Smart took over as the head coach of Georgia, the Over is also 7-1 when the Bulldogs have faced opponents that give up at least 5.9 yards per play. 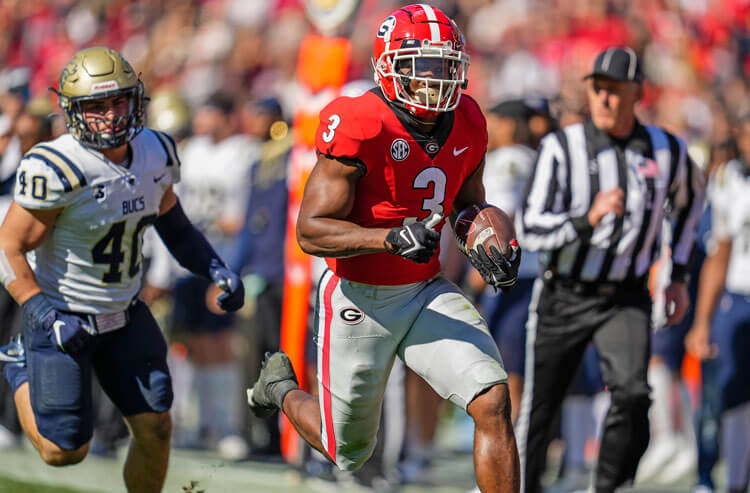 Georgia vs Georgia Tech Picks and Predictions: Yellow Jackets No Match for Bulldogs
Provided by