As the Gators and Seminoles get set for their rivalry clash, these teams are headed in distinctly opposite directions, with one visibly checking out. Find out who's worth your backing as we break down our Florida State vs. Florida picks.

Few college football rivalries are better than the one that exists between Florida and Florida State. On Saturday, that rivalry will renew with both teams looking to earn that crucial sixth win to close out the season.

Here are our college football picks and predictions for the rivalry matchup between the Florida State Seminoles and the Florida Gators.

The Florida Gators have lost their last four games against power five schools, but that hasn’t stopped people from betting the Gators at -2.5 currently.

It’s been absolute chaos for the Florida Gators recently. The Gators just lost on the road to Missouri in overtime, 24-23, as the Tigers decided to go for two after scoring a touchdown following Florida scoring theirs in OT.

All year long, Florida has struggled to tackle and has looked terrible in coverage. While the pass rush has been effective, with the coverage lacking, it hasn’t been all that helpful. On the year, Florida’s defense allowed just 363.5 yards per game but recently, things have been harder.

On the offensive end, starting quarterback Emory Jones suffered an injury in practice and now Anthony Richardson will more than likely get the start in this game. Richardson has five interceptions to go with five touchdowns on just 57 attempts, so his accuracy can be a huge liability.

Meanwhile, Florida State has won their last two games over Miami and Boston College. It’s also been competitive against teams like North Carolina State and Clemson, losing by 14 or fewer in those two games as well.

The Seminoles have looked solid offensively under Jordan Travis, as he has 14 touchdowns and five interceptions on the year. The run game has also produced, with 180.8 yards per game.

On the other hand, the defense has played lights out. Despite allowing 26.7 points per game, the Seminoles are extremely skilled on the defensive end and have looked great making tackles in the open field along with stopping the run recently.

I’ll side with Florida State on the road. Florida is clearly checked out.

I know I talked up on Florida State’s defense, but with Richardson under center, you’re going to get some good and bad. The good will be Richardson’s ability to create plays. He’s a young and highly regarded talent that could be something special in a different system.

On the other hand, he’s a guy that could throw a pick-six at any given moment, or just make a bad play trying to force things.

Then there’s Florida’s defense, which has just played terribly recently. This is a Gators team that allowed 52 points to Samford, 40 to South Carolina, 34 to Georgia, and 49 to LSU in the last month and a half.

I’ll grab the Over here.

With Dan Mullen fired and the Gators struggling to win, I’ll grab Florida State at +2.5 in this one. Despite being on the road, Florida State should be the defense that gets more stops and has the ability to force Richardson into some big mistakes in this game.

The Seminoles defense has really stepped up of late and has allowed no more than 30 points in their last five games this season with four games holding teams to four touchdowns or fewer. 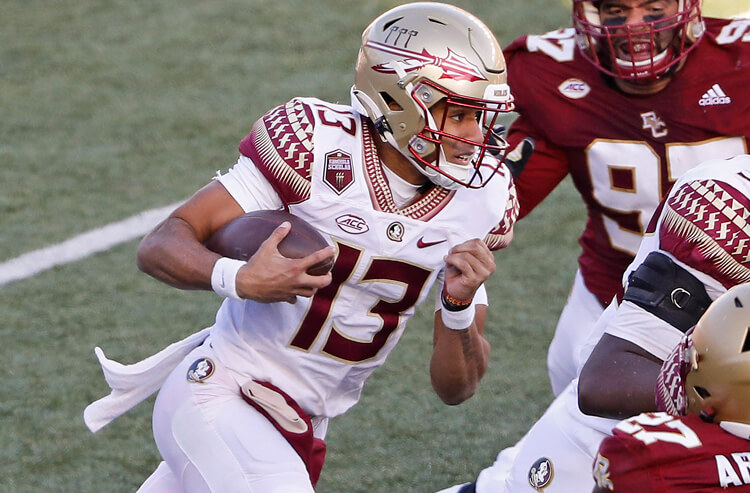 Florida State vs Florida Picks and Predictions: See Ya Later, Alligators
Provided by