The Eastern Washington Eagles were the FCS runner-up in 2018 but missed the playoffs a season ago despite going 6-2 in the Big Sky Conference behind another strong year from quarterback Eric Barriere.

The Eagles will look to begin the 2021 spring college football season with a bang when they visit the Idaho Vandals as 5.5-point favorites. But the Vandals upset the Eagles in the Kibbie Dome last season - can they do it again?

Find out in our best college football free picks and predictions for Eastern Washington vs. Idaho, with kickoff set for Saturday, Feb. 27 at 6:00 p.m. ET.

This game will be played indoors at the Kibbie Dome in Moscow, Idaho.

Eastern Washington had a sluggish start to the 2019 season, starting the year at 3-5 (one of those losses came courtesy of Idaho) before winning four in a row down the stretch but it wasn’t enough to qualify for the FCS playoffs.

The Vandals upset the Eagles 35-27 in a game that wasn’t as close as that score indicates, with Idaho jumping out to a 28-0 lead. If the Eagles want to avoid a letdown in their season opener, they’ll need a big game out of quarterback Eric Barriere.

The senior signal-caller is among the favorites to win the Walter Payton Award (the FCS Heisman) after throwing for 3,712 yards and 31 touchdowns - compared to just four interceptions - while adding another 558 yards and eight scores on the ground. Barriere gets most of his pass-catchers back, but the Eagles are replacing four starters on the offensive line.

The reason for the Eagles’ inconsistencies a season ago was not the offense, though. Eastern Washington ranked ninth out of 13 Big Sky Conference teams when it came to total yards allowed and points, giving up 34.6 per contest.

Idaho, on the other hand, is poised to make a leap in the Big Sky after going 3-5 in the conference a season ago. Connecticut grad transfer Mike Beaudry comes in to take over at quarterback with his big arm and a multitude of weapons at his disposal.

But the strength of the Vandals is on the defensive side of the ball. The Vandals’ front seven might be the most fearsome in the Big Sky. Linebackers Christian Elliss and Tre Walker have FCS All-American potential and lead a squad that ranked fifth in total defense in Big Sky play. Idaho also led the Big Sky in defensive efficiency against the pass and should be able to make life tough for Barriere.

Eastern Washington will certainly present a challenge for Idaho, but the Vandals getting nearly a touchdown at home against an Eagles team with a leaky defense that went 2-5 on the road last season is too tempting to pass up.

The total for this Big Sky matchup is the second-highest on the FCS board this weekend, sitting at 62.5. That probably has something to do with the fact that Eastern Washington led the Big Sky in scoring a season ago, putting up 42.8 points per game in conference play while at the same time surrendering 31.6.

But hold your horses before you go running to bet the Over on this one. The Eagles didn’t soar as high on the road, putting up just 34.6 points per game away from home last season. And in Eastern Washington’s three toughest Big Sky games (Idaho, Sacramento State, and Montana), that number dropped even further to 23.7 points per contest.

That could spell trouble against one of the best defenses in the FCS. And while the Idaho offense has lots of potential, this is still the first game with a new quarterback under center and there could be some growing pains. We like this game to sneak below the number.

Did you know that if you parlayed today’s Eastern Washington vs Idaho picks, you could win $26.45 on a $10 bet? 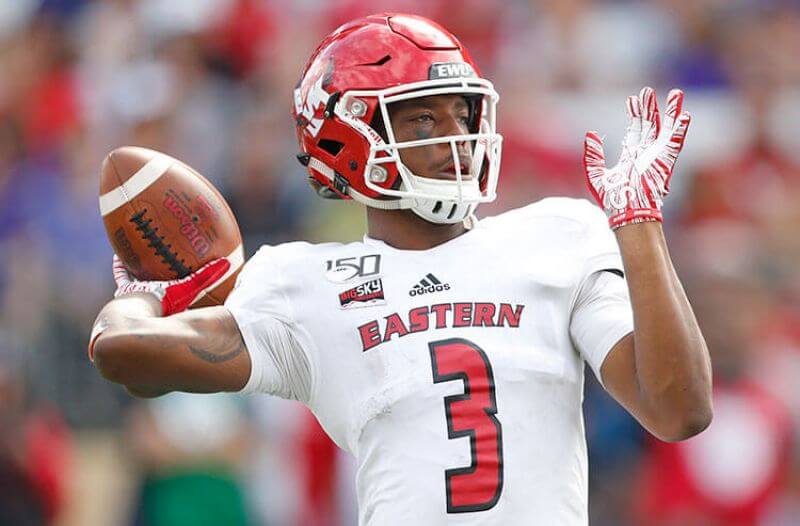