Arkansas is going to continue grinding out foes behind a formidable offensive line, and while Cincinnati thinks it's been slighted again, its program has replacements to make, and our college football picks see a slim margin for error in Week 1.

Most Playoff teams do not open as an underdog in their first game of the next season, but such is the continued struggle for the Cincinnati Bearcats. They may be ranked No. 23, but they are apparently considered a touchdown worse than the No. 19 Arkansas Razorbacks. Can Cincinnati once again prove its doubters wrong and spring this upset?

Here are our free college football picks and predictions for Cincinnati vs Arkansas on September 3.

All summer, Arkansas was favored by a touchdown, and then last week, that ticked down to -6.5. On Sunday, some books fell to -6.0, and they bounced back and forth most of the week. As of Thursday night, either -6.5 or -6.0 can still be found.

Arkansas covered the last three games of 2021, including an Outback Bowl win against Penn State. Meanwhile, Cincinnati stumbled to meet expectations in the second half of 2021, going 3-5 ATS from mid-October to New Year’s Eve. Find more NCAA betting trends for Cincinnati vs. Arkansas.

Cincinnati vs Arkansas picks and predictions

For any team, that would be a big deal. For a Razorbacks offense that rushed for more yards per game (228) than it passed for (214) before even adjusting for sacks, it is crucial. Head coach Sam Pittman has made not only his living on the offensive line, but also this entire program’s success. Now a senior, quarterback KJ Jefferson has appeared in 21 games and scored 34 total touchdowns. He’s not necessarily a big-play rusher, but he still led Arkansas with 664 rushing yards last year, averaging 4.5 yards per rush. (Still not sacks-adjusted.) Two other rushers that had more than 570 yards also return for the Razorbacks, underscoring how strong this ground game should be.

Meanwhile, Cincinnati has to replace its top two defensive linemen and its top three tacklres, not to mention the best cornerback duo in the country in 2021. Rebuilding that defense will be quicker than usually expected from a Group of Five team, but it will not take hold in the season opener. Too much needs to be replaced.

And replacing those players while going against a team that went .500 in the SEC a year ago will be a task too tall for the Bearcats.

If Pittman’s goal is to grind down this game via the run, he’ll find success. Obviously, a successful run game eats the clock and cuts into any hopes of a high-scoring affair. Arkansas scored a good bit last year, averaging 30.9 points per game, but against Power Five opponents, that fell to 27.4 points per game, a number buoyed by the 52-51 shootout loss to Mississippi. (If you remember, Pittman opted to go for two and the win rather than ease into overtime. Excluding that game, the scoring average falls further to 23.8.)

While Cincinnati starts over offensively, now without star quarterback Desmond Ridder, bell cow running back Jerome Ford, and big-play receiver Alec Pierce, it will not be able to spark this game toward the Over on its own.

Some argue this line is too high, thinking Arkansas should be favored by only about a field goal. They have a valid point — Cincinnati is clearly an experienced team, at its best it was one of the best last year, and this might have the best coaching staff in the Group of Five.

But Pittman’s ground game reduces flukiness in a given matchup. The Razorbacks simply chew through their opponents, and any defensive line overmatched in the trenches will not stand a chance. Arkansas averaged five yards per rush last season, and it should exceed that Saturday.

Any time a team gains more than five yards per carry, it is safe to expect it to win by at least a touchdown. 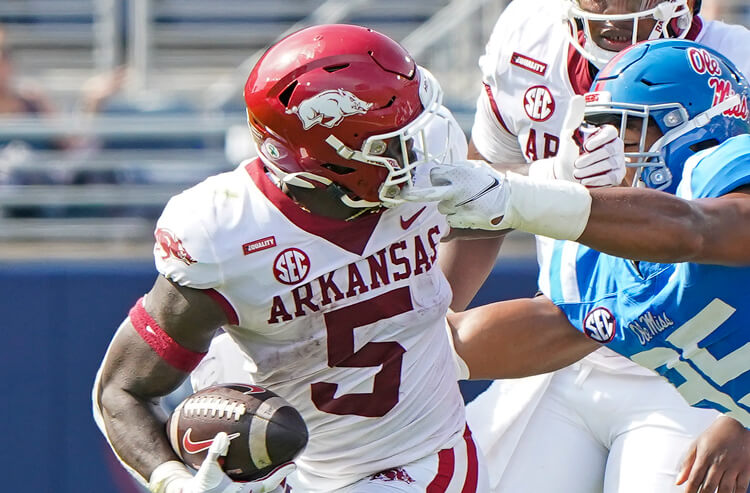