The CFP Championship Game is any college football fan's dream. Two undefeated blue-blood programs in Ohio State and Alabama. More potential NFL Draft picks than you could shake a stick at. And of course, two of the best quarterbacks in college football.

The Buckeyes’ Justin Fields was a Heisman finalist a year ago and is coming off a remarkable six-touchdown performance in the Sugar Bowl. While the Crimson Tide’s Mac Jones finished third in Heisman voting and was near perfect in the Rose Bowl.

It begs the question: Who is the better bet in Monday’s CFP Championship Game? So, we’re breaking down the prop odds for both of these gunslingers, seeing who is the best bet to eclipse these numbers.

Justin Fields was brilliant in the Sugar Bowl. After struggling in the Big Ten Championship, Fields torched the Clemson secondary, going 22-28 for 385 yards with six touchdowns, and some of the throws were absolute dimes. That total brought Fields up to 272.3 passing yards per game.

Jones, on the other hand, was uber-efficient in the Rose Bowl, going 25-30 for 297 yards with four touchdowns and no picks. The crazy thing is that brought his passing yards per game down to 336.3.

So, both players' passing yards props are notably above their season averages, but if you have to pick one to go above their number, we’re siding with Fields. His total is just 18 yards above his average, and he has gone Over this number four times in his seven games. On top of that, those were four of Ohio State’s most competitive games, with the outlier being the Northwestern game.

Additionally, while Bama’s secondary shut down Ian Book in the Rose Bowl, they have also been a little vulnerable at times, most recently allowing Florida’s Kyle Trask to throw for 408 yards in the SEC Championship.

Mac Jones going Over 27.5 completions is the one to go with on this one here. While Fields’ number of 23.5 is lower, Jones just throws the ball more. Jones averages nearly 30 passes per game and heck, he threw the ball 30 times in the Rose Bowl against Notre Dame, a game where he barely had to throw in the fourth quarter. And in a game that was closer, like the SEC Championship against Florida, Jones ended up with 33 completions on 43 pass attempts.

Meanwhile, Fields averages 20.1 completions on 27.4 attempts per game and has had 20 or fewer completions four times this season, which includes a 12-completion performance against Northwestern. That, combined with Ohio State’s commitment to the run game, makes Jones the better bet here.

This is another one that's close to a coin flip. Jones and Fields both average three touchdown passes per game this season, and both come into the title game red-hot.

Jones has nine touchdown passes in his last two games, while Fields threw six touchdowns last time out against Clemson. So, this isn’t going to be a super in-depth breakdown, but we’re going with Jones again in this one. The Tide’s signal caller has thrown four or more touchdowns in seven of his 12 games (58.3 percent), while Fields has three or more scoring passes in three of his seven games (48.9 percent). That and the extra weapons give Jones the edge.

This one is pretty straight forward, even with a number this low, Jones just doesn’t rush the football. He just sits behind that beast of an offensive line and goes through his progressions until he finds one of those weapons he likes so much. The most yards he has rushed for in a game is 12 against Notre Dame, and actually has just three total rushing yards for the season.

Fields, on the other hand, will use his legs when he needs to. The Buckeyes dual-threat quarterback averages 45.1 yards per game this season, but has racked up as many as 104 yards in a game. Alabama’s defensive front will likely push Fields out of the pocket a bit as well, He is much more likely to go Over his rushing total.

This is a really tough one. Alabama is the better team, and I expect them to win this game so the offensive MVP will likely come from the Tide, and Jones is the favorite to win the award at +350, but that just doesn’t seem like enough value in this spot. If Alabama does win, there are a handful of guys who could win the Offensive MVP award and provide better value, including DeVonta Smith (+500) and Najee Harris (+600). Whereas if Ohio State pulls off the upset, Fields will likely need to have a great game. He’s the better pick in this category. 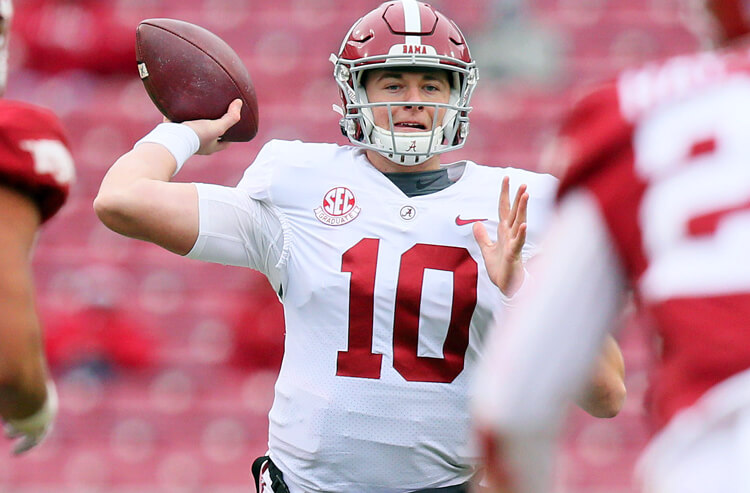 Justin Fields vs Mac Jones: Who's the CFP Championship Best Bet?
Provided by