It's always fun to root for the underdogs, and although it feels weird saying it, the Ohio State Buckeyes, loaded with five-star recruits and future NFL draft picks, are significant dogs against the Alabama Crimson Tide in Monday's CFP Championship Game.

The Buckeyes paid off for me when I took them as 7.5-point pups against Clemson last weekend, and I think oddsmakers might be underestimating them once again.

If you – like me – think Ohio State can beat the college football odds again, consider betting these prop picks for the National Championship showdown at Hard Rock Stadium on January 11.

Alabama is known for it's fast starts and nothing would put Ohio State in a better position to cover the spread than scoring the first touchdown of the game.

The Buckeyes have plenty of talented skill players who can get into the end zone but wide receiver Garrett Wilson has been particularily productive in the opening quarter. Of Wilson's 673 receiving yards and five touchdowns this season, 292 of those yards and three of those TDs came during the first 15 minutes.

With Wilson installed at +1,200 to score the first touchdown of the game, this is a longshot bet we're sprinking a few dollars on.

Either team to score three unanswered times - No

Let's be honest, I think Ohio State has a good chance of covering the spread in this game but Alabama is an 8.5-point favorite for good reason. The Crimson Tide are absolutely loaded on both sides of the ball and can put up points in a hurry thanks to explosive playmakers like DeVonta Smith, Najee Harris, John Metchie, and maybe even Jaylen Waddle, who is listed as a game-time decision after missing almost three months with an ankle injury.

If Ohio State wants to stay in this game, they have to make sure it's is a slug-fest and punch back after every Alabama score. And while I think OSU can win this contest I don't see them scoring three times in a row without an Alabama clap-back.

With oddsmakers expecting one of these sides (most likely Bama) to score three times in a row, there is value in taking the contrarian position at +275.

I don't see Ohio State holding back the Tide too much. After all, Bama averaged 535.2 yards and 48.2 points per game this season, despite taking their foot off the pedal during the second half of blowouts.

The Buckeyes pass defense hasn't looked as strong this season as it has in recent years, so if they want to keep pace in this contest they'll have to put up plenty of points of their own.

Thankfully for underdog bettors, Ohio State has a high-powered offense as well, totaling 544.9 yards and 43.4 points per contest.

This prop pick is a perfect example of shopping for the right number. Some books have this number as high as 33.5 while others have it at 31.5. With a game total of 75 and the OSU line at +8, a Buckeyes total of 33.5 would make derivative sense and a lower number is well worth betting on if you think the Buckeyes can cover.

With quarterbacks like Mac Jones, Kyle Trask, Trevor Lawrence and Zach Wilson getting so much Heisman love this season, it was easy to forget about Ohio State QB Justin Fields.

But don't forget that Fields finished third in the Heisman Trophy voting a year ago, and despite playing just seven games this season, has completed 73.4 percent of his passes for 1906 yards.

In Alabama's closest game of the season, the Tide surrendered 408 passing yards to Kyle Trask. They also gave up 379 yards through the air against Ole Miss and allowed 335 passing yards to Texas A&M.

Fields outdueled Lawrence last week, throwing for 385 yards and six touchdowns on just 28 pass attempts, and the Buckeyes will need another big game from him on Monday.

Buckeyes wide receiver Chris Olave has been one of the best receivers in the Big Ten over the past two seasons. He's been a model of consistency this year, racking up over 100 receiving yards in five of his six games played, including a 132-yard performance against Clemson on New Year's Day.

As good as the Crimson Tide are in practically every aspect of the game, they've gotten burned by No. 1 receivers on several occasions this season.

Gators wideout Kadarius Toney went off for 153 yards in the SEC Championship game, while Elijah Moore (143 yards), Ainas Smith (123 yards), and Kayshon Boutte (111 yards) all had big games against the Tide earlier in the season.

Fields and Ohio State really missed Olave as an outside target in the Big Ten Championship game and will want to get him involved early and often against Alabama.

Speaking of that Big Ten title game, did anybody do more to boost their draft stock in the last month than Trey Sermon, who set a school record with an incredible 331 rushing yards in that contest?

Sermon was a high-recruited high school player out of Georgia and won the Big 12 Offensive Freshman of the Year award in 2017. While he split carries earlier in the season after transferring from Oklahoma, an injury to Master Teague opened the door for Sermon to take control of the backfield.

Sermon had an encore performance with 31 carries for 193 yards against Clemson in the Sugar Bowl, which is all the more impressive when you consider that the Tigers entered that game with the seventh-best run defense in the country.

Although Teague could be back for the CFP Championship, I think the Buckeyes ride the hot hand with Sermon. 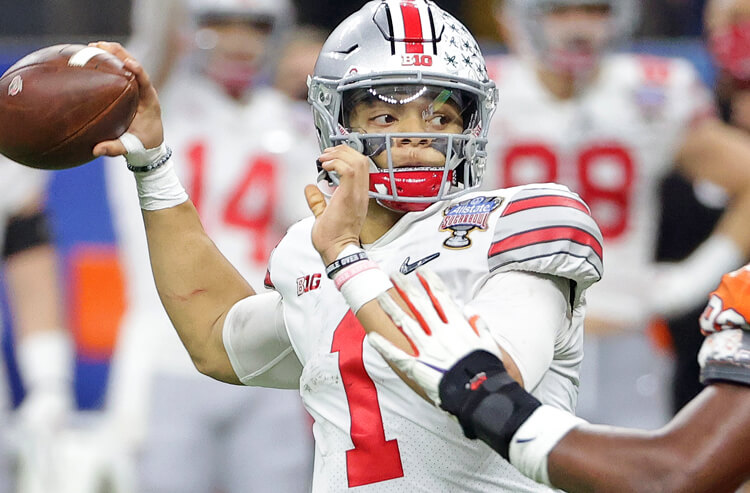