The Alabama Crimson Tide Death Machine has steamrolled into Monday’s CFP Championship Game against the Ohio State Buckeyes. In fact, Bama has been so dominant during this crazy college football season that they are more than a touchdown betting favorite against an impressive and undefeated Buckeyes squad that looks to be peaking at the right time.

So, if you're yelling “Roll Tide!” and think Bama are going to walk away with their sixth national title in the Nick Saban era, then here are five Alabama prop bets you need to make for the CFP Championship Game.

Well, we might as well start with the Heisman winner. (To be fair Alabama had three guys in the top five of the Heisman voting, but more on them later). Right off the bat, this number is a little soft. Devonta Smith had an incredible year, becoming the first wide receiver to win the award since 1991.

Smith was Alabama’s best player in their Rose Bowl win over Notre Dame, looking like he was flying over and past defenders. His seven-catch, 130 yard, three-touchdown performance against the Irish brought his numbers up to 105 receptions, 1,641 yards and 20 touchdowns for the season. That equals a receiving yards per game average of 136.8, having gone Over this number eight times in his last 10 games.

You can bet Smith will show up for the biggest game of the season, and the Buckeyes don’t have the horses in the secondary to stop him.

Now, this is a more interesting number for Mac Jones (who finished third in Heisman voting). The Tide’s junior quarterback had a fantastic season and it’s even more impressive when you consider Jones had to replace Tua Tagovailoa.

Jones has completed 77 percent of his passes for 4,036 yards with 36 touchdowns compared to just four interceptions. So, some quick math tells you that Jones averages 336.3 passing yards per game. But don’t let this elevated number scare you away.

Jones was uber-efficient against Notre Dame, going 25-30 for 297 yards with four touchdowns and no picks, and that was with minimal effort in the fourth quarter. But this matchup with Ohio State should be closer, and when Jones has been asked to air it out, that hasn’t been a problem. He’s gone Over this number six times this season, which includes torching Florida for 418 yards in the SEC Championship. This number shouldn’t be a problem facing a Buckeyes’ defense that ranks 103rd in the country in passing yards allowed per game.

With Smith and Mac Jones stealing all the headlines in the passing game, Najee Harris has gone a little under the radar. Well, under the radar for someone who finished fifth in Heisman voting. But no one scored more with more potency and regularity for the Crimson Tide than Harris. The Tide running back rumbled and rolled for 27 touchdowns this season – more than anyone in the country.

Harris has been a big part of getting the Tide off to a good start in games. The bruising back has scored the opening touchdown in five of Alabama's games this season and he also has seven first quarter touchdowns. That makes Harris a good bet to open the scoring.

Let's stick with Harris here. While he was kept off the board against Notre Dame, he could be the key to a Tide victory in this one, and has scored two or more touchdowns in eight of Alabama’s 12 games this season. Ohio State doesn’t give up much in terms of rushing yards, but this Bama offensive line is the best and most physical the Buckeyes have faced all season. For a guy who loves to score touchdowns in bunches you have to love the value for Harris to score more than once.

While running back Master Teague III got the bulk of the carries and did most of the damage out of the Buckeyes’ backfield early in the season, Trey Sermon has been a huge part of their success the last two games. The Oklahoma transfer has absolutely obliterated defenses, rushing for a ridiculous 524 yards at a clip of nearly six yards per carry, scoring three times.

Ohio State will need the running game to be successful if they want to pull off the upset, but stopping the run is the strength of the Alabama defense, allowing just 3.2 yards per carry this season. Shutting down Sermon will be key to an Alabama victory. 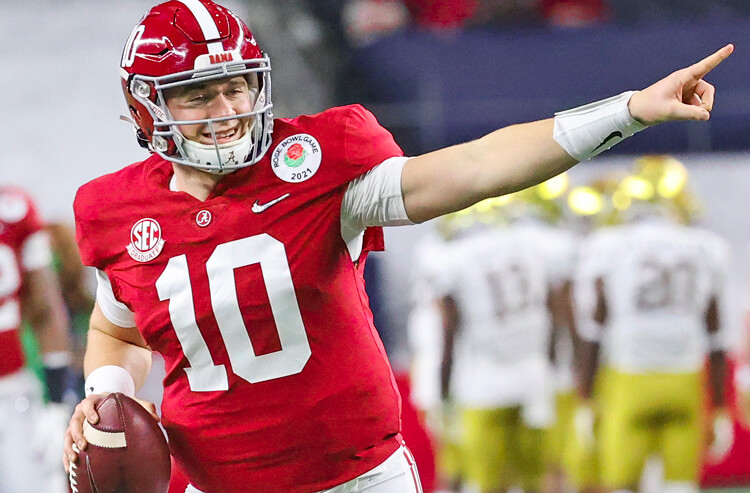 Alabama Prop Bets for the CFP Championship Game
Provided by