Alabama vs Ohio State Picks for the CFP Championship Game

After arguably the craziest college football season ever, we still end up with one hell of a blue blood College Football Playoff Championship game, as the Ohio State Buckeyes face off against the Alabama Crimson Tide.

The Crimson Tide will be 7.5-point favorites after thumping Notre Dame 31-14 in the semifinals, while the Buckeyes stunned Clemson 49-28. Can OSU pull off another upset, or will Bama win its fifth national title in the Nick Saban era?

Here’s a look at our best college football free picks and predictions for the CFP Championship Game between No. 3 Ohio State and No. 1 Alabama with kickoff set for Monday, January 11 at 8:00 pm ET.

This season’s national championship game will be contested at Hard Rock Stadium in Miami, Florida and while the weather won’t be perfect, it doesn’t look terrible either. Temperatures will be in the high-60s to low-70s with mostly cloudy skies and a small chance of showers later in the night. Winds of 12-14 mph out of the southeast are expected to calm down near game time. Be sure to monitor the gametime conditions with our NCAA football weather info.

The total for the national championship is a big one, and there are many reasons why, including the trends. The Over is 4-1-1 in Ohio State's last six games overall and 4-0 the last four times Alabama has played in the national title game. Find more NCAA betting trends for Ohio State vs. Alabama.

While Ohio State and Alabama are two of the most recognizable and successful programs in college football, this will be the first time the schools have faced off with a national title handed to the winner.

The Buckeyes are back in the CFP Championship game for the first time since 2014, when they dominated Oregon 42-20, while the Crimson Tide are making their fifth national title game appearance in the last six seasons. Even with all that success, this may be the scariest version of Alabama yet. That’s because the Tide can beat you in so many ways, starting with Heisman finalist Mac Jones and winner DeVonta Smith.

Jones was supposed to be “the guy after Tua,” but he has made his own name for himself this season. The junior quarterback is completing 77 percent of his passes for 4,036 yards (that’s a crazy 11.4 yards per completion) with 36 touchdowns compared to just four interceptions.

Smith has hauled in 98 of those passes for 1,511 yards and 17 scores, while John Metchie III has stepped up in Jaylen Waddle’s absence. But the exciting news out of the Bama camp is that Waddle is expected to practice this week after missing most of the season with an ankle injury. Oh, then Jones can hand the ball off to one of the best running backs in the country – Najee Harris, who averaged nearly six yards per carry and tallied 24 touchdowns.

Alabama is coming off a game where they totaled 439 yards and 7.9 yards per play against a very good Irish defense. One that may be better than Ohio State’s.

Speaking of the Buckeyes, no one expected them to pull off the upset over Clemson, as Justin Fields had looked a little sloppy in games against Indiana and Northwestern, but that was not the case against the Tigers. Fields displayed his quick release and an accurate deep ball. He ended up going 22-28 for 385 yards and six touchdowns and has been outstanding outside of those two aforementioned games. But Fields took a wicked shot to the ribs against Clemson, and while he finished the game, he clearly looked in pain while making some throws.

At the same time, running back Trey Sermon had his second-consecutive massive week, rumbling for 193 yards and a touchdown. The former Sooner now has 524 and three scores in his last two games. But will Sermon be able to find success running against an Alabama defense that allows just 3.2 yards per carry?

Teams that have had success moving the ball against Alabama (think Florida, Ole Miss) have done so through the air, but there is still some talent in the Bama secondary. One key matchup to keep an eye on will be Ohio State wideout Chris Olave against Alabama corner Patrick Surtain. If Surtain can lock up Olave, the Tide can make things a little tougher on Fields.

Another key matchup is all of those Bama wideouts against the Ohio State secondary. The Buckeyes allowed 260.8 passing yards per game, which ranked 103rd in the country, and overlooked in the Clemson win was that Trevor Lawrence threw to the tune of 400 yards.

There is no doubt that the Buckeyes can win this game outright, and there is no way Saban thinks they are the 11th-best team in the county. But I just can’t bring myself to fade Bama in this spot, they just have too many weapons. Roll Tide.

While the side of the CFP Championship game may be a difficult thing to pick, even at an elevated 74.5, the total seems a little riper for the picking.

Let’s start with more praise for Alabama’s offense. The Crimson Tide’s Rose Bowl total of 31 points was their lowest output of the season by a whole touchdown and it was just the second time all season they scored less than 41 points.

They face an Ohio State defense that did a fairly good job of containing the Clemson offense, but Lawrence had nowhere near the weapons Jones has at his disposal, and Lawrence still went off for 400 yards. They also allowed Indiana’s Michael Penix Jr. to throw for nearly 500 yards, and Mac Jones is better than Penix. It’s hard to say if Bama will get to its season average of 49.7 points, but it would be surprising if they were held below 40.

Meanwhile, Ohio State is coming off its best-played game of the season and will hope to carry that momentum into a game against a defense that while solid, has its weaknesses. Florida and its high-powered passing attack were able to put up 46 points in the SEC Championship, and Ole Miss scored 48. Fields, Sermon, Olave and Co. are good enough to give Bama some problems.

That means this game should be a shootout from start to finish, and it doesn’t hurt that the Over has cashed in the last four national championships Alabama has played in.

The Crimson Tide have opened the scoring in 11 of their 12 games this season and in each of their last nine games in a row. And in nine of those 11 instances, they opened the scoring with a touchdown. Ohio State, on the other hand, has been pretty good in that category, scoring first in five of their seven games. But they allowed Clemson to get on the board first in the Sugar Bowl, and despite hitting a field goal to open the Big Ten title game, they trailed Northwestern after the opening quarter. There is nice value in Alabama opening the score with a major.

There has been no better first-half team in the country than Alabama, making the Tide a fantastic first-half spread bet all season long, and you shouldn’t expect that to change in the national championship game. Alabama’s 28.9 first-half points per game were tops in the nation among teams who have played in at least five games. At the same time, the Tide allowed just 57 first-half points over their last eight games, cashing the first-half spread in each of those contests. Ohio State was another potent first-half team and put up 35 points in the opening half against Clemson, but in the Big Ten Championship, they actually trailed Northwestern heading into the break. We’re betting Bama to cover another first-half spread.

Running backs Najee Harris and Trey Sermon will be a huge factor in determining this game. In fact, you can even make the argument the back with the bigger day will lead their school to a national title. So, what better player prop to pick than a matchup between the two. Obviously, both backs will be fed the ball in the running game, but which team will do a better job of using these guys to catch the ball out of the backfield?

Harris has been a weapon for Mac Jones all year long. He averages three catches, 28.8 receiving yards per game and has gone over 30 yards receiving six times this season. Sermon on the other hand, just got involved in the passing game for the first time last week. And while he went for 61 yards on four receptions, more than half of that came on one play. We’re going with familiarity and consistency as we’re betting Harris to wind up with more receiving yards than Sermon.

Did you know that if you parlayed today’s National Championship: Ohio State vs. Alabama picks, you could win $129.16 on a $10 bet? 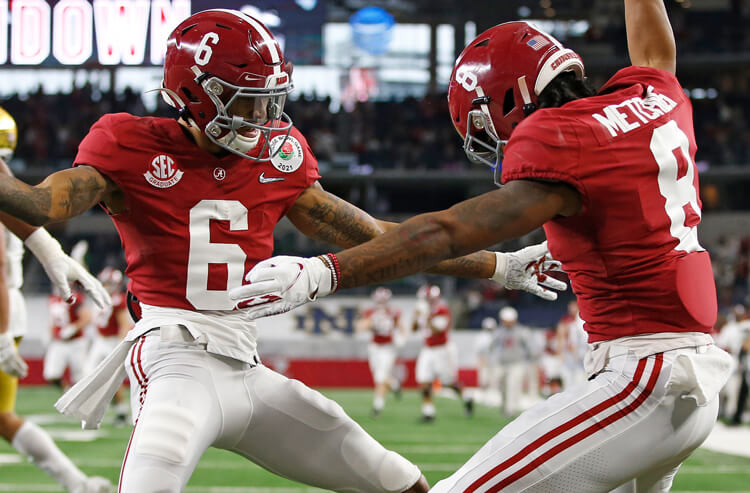