The Cougars come into this matchup hot. Not only are they 5-0 on the season, but they are 5-1 ATS in their last six meetings versus the Broncos and beat them 51-17 last year. Find out if we like them to do it again in our Boise State vs. BYU picks.

Boise State no longer walks into a game against a non-Power Five opponent with complete expectations of a victory, particularly not after BYU shellacked the Broncos to the tune of 51-17 last year. Even then, Boise State was a 5.5-point home underdog. Clearly, the Cougars have turned the tables out West.

There may not have been much of an expectation of BYU continuing that trend after replacing first-round quarterback Zach Wilson and most of its offensive line, but Cougars head coach Kalani Sitake instead has BYU eyeing an unbeaten season and a possible playoff talking point.

Here are our free college football picks and predictions for Boise State vs. BYU on October 9.

After opening with the Cougars favored by 3.5 points, steady action moved this line all the way up to BYU -6 by Wednesday evening or Thursday afternoon, depending on the book. That may have been a reflection of positive news regarding BYU starting quarterback Jaren Hall’s health. A starting quarterback’s health — after a vague injury, at that — could also help explain the total moving from 55.5 on Sunday to 57.5 by Wednesday night. Use the live odds widget above to track any future line movements right up until kickoff and be sure to check out the full college football odds before placing your bets.

Boise State may enter this weekend matchup with hopes of avenging last year’s demolition, but by no means does BYU dismiss this budding rivalry, either. The Cougars know they need to beat the Broncos to assert dominance over the West Coast’s non-Power Five stratosphere, even when Boise State appears to be struggling.

And Boise State does appear to be struggling.

The Broncos have gone 1-2 ATS in the last few weeks, hardly cause for alarm, but losing an early-season game to a Mountain West contender like Nevada deflates Boise State’s hopes earlier than that program is used to.

Meanwhile, BYU’s season is gaining steam. The Cougars have covered in three of their last four, and even that letdown was a victory, an important distinction in a season that is quickly yet quietly developing playoff buzz. BYU has already beaten three Pac-12 opponents. By the end of the season, it will face seven Power Five teams. A playoff berth is extremely unlikely given the realities of college football in 2021, but it is not entirely impossible, especially as this season has unfolded into chaos.

When chasing a playoff berth, every game takes on meaning, so there are no true lookahead moments. If this was a large spread, like laying 22 against South Florida, then a lazy win could be in the cards, but any margin within a possession can still be covered in a “lazy win.” (And that not-so-close call against the Bulls came without Hall.) Not that the Cougars are likely to take such an approach against Boise State, particularly with Hall back in the lineup.

This may not be the most analytical handicap, but sometimes narrative and situation drive the moment. The narrative here is BYU needs to keep beating the Broncos, and the situation is that a chase to restore 1984’s glory is still afoot.

Boise State’s offense has struggled this season. Remove a stomping of UTEP, in which the Broncos put up 54, and they've managed 27.3 points per game in their four other contests. More notably, they are rushing for just 74.4 yards per game and 2.14 yards per carry. Any Boise State production has come through its passing game, led by veteran quarterback Hank Bachmeier.

But BYU does not give up much through the air, only 251.4 yards per game — a number inflated by how often opponents are playing catch up — and 7.2 yards per attempt. Perhaps more notably, the Cougars have intercepted six passes while allowing four passing touchdowns.

Boise State is already struggling to score in the red zone, converting only 13 of 23 trips inside the 20-yard-line into touchdowns, ranking No. 85 in the country. Taking away Bachmeier’s arm will compound that struggle and keep the Broncos from contributing enough to hit this Over. 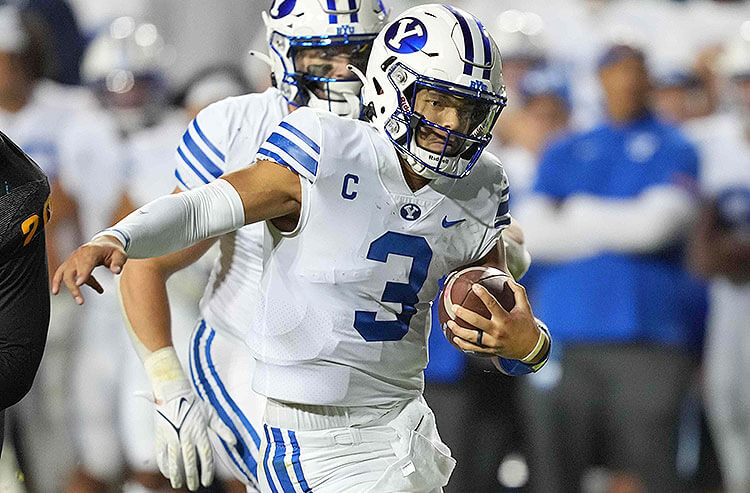