North Carolina may be enjoying a better season than Florida State but the two teams share something in common, and that's a lack of defense. Can a shootout keep FSU in it enough to cover? Find out with our college football betting picks.

The last four meetings between these teams have been decided by three or fewer points, so here’s to hoping that this will be another exciting game.

Do the Seminoles have any chance of keeping this thing close? Find out in our Florida State vs. North Carolina picks and predictions.

The Seminoles were 16.5-point underdogs when this line opened, but they’re now getting 17.5 points nearly everywhere. Meanwhile, the total has gone from 63.5 at open to 64.5 on nearly every sportsbook. The consensus seems to be on the Tar Heels and the Over, but neither of those is an overwhelming majority.

North Carolina is 1-6 against the spread in its last seven games following an ATS win. Find more NCAA betting trends for Florida State vs. North Carolina.

As mentioned earlier, the last four meetings between these teams have been decided by three or fewer points. The first of those two matchups came in 2009 and 2010, and the most recent two were in 2016 and 2020. Having said that, these teams tend to play each other close when they share the field, and this game should be a bit closer than the oddsmakers think it will be.

One of the main reasons to believe in the Seminoles holding their own in this one is that the Tar Heels are lousy defensively this season. Sure, North Carolina is coming off of a 38-7 win over the Duke Blue Devils, but the team also gave up an average of 42.0 points per game in its previous two contests. Those were games against the Virginia Cavaliers and Georgia Tech Yellow Jackets, so it’s not like the Heels were playing elite competition.

Florida State and Georgia Tech also have some similarities that could make this game tough on North Carolina. Like Yellow Jackets quarterback Jeff Sims, Seminoles quarterback Jordan Travis is yet another dual-threat weapon under center. Travis threw for two touchdowns in last week’s win over the Syracuse Orange, and he also added 113 yards on the ground. Considering the Tar Heels weren’t able to contain Sims, it’s hard to imagine much changing against Travis.

The big difference between the Seminoles and Yellow Jackets is defense. Florida State has no chance of shutting down Sam Howell and the Tar Heels passing game. Howell is the favorite to be the first quarterback selected in next year’s NFL Draft, and he should be able to pick this Seminoles defense apart. However, taking Florida State isn’t a play on this group’s defense. This is going to be an extremely high-scoring game, and the bet here is that the ‘Noles will be able to score enough points to keep this within two touchdowns or so.

This game has a chance to be a serious shootout, with both of these defenses seemingly nowhere near capable of stopping one another. Overall, North Carolina will end up getting a couple of extra stops, which is why Brown’s team is favored by so much. However, the Tar Heels defense was absolutely shredded when facing competent offenses before a run-in with the Blue Devils, and this Seminoles team is coming off its best offensive performance of the year.

Since Brown got to Chapel Hill, the Over is 9-3 when the Tar Heels are coming off a game that went Under the total. The Over also happens to be 6-2 when North Carolina is coming off a win by 10 points or more against a conference rival. This Tar Heels offense should continue rolling against a Seminoles team that has given up at least 30 points in four of its five games this year. The only team that didn’t reach the 30-point mark against Florida State was FCS Jacksonville State.

Did you know that if you parlayed our Florida State vs. North Carolina picks, you could win $26.45 on a $10 bet?

When Will Sports Betting Be Legal In Florida 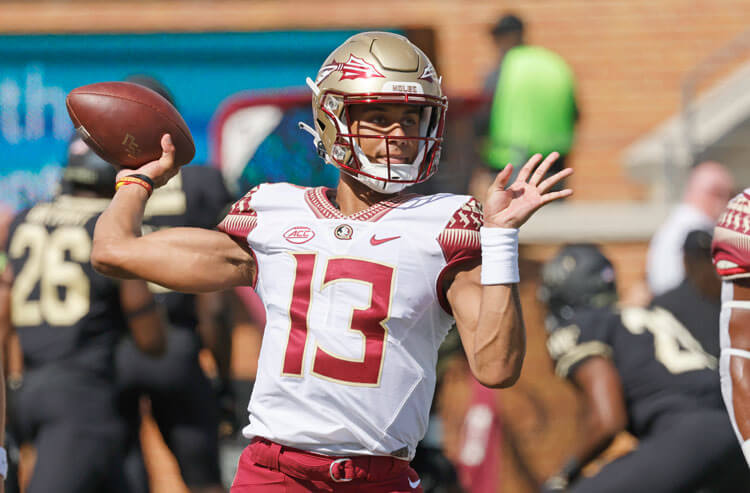