We have a pair of undefeated teams powered by elite defenses clashing here, as Penn State and Iowa meet in a Big Ten showdown. Our picks take a look at whether the total of 41.5 is low enough for us to go Over, plus more.

Thanks to undefeated records and elite defenses, the AP Poll has both the Penn State Nittany Lions and Iowa Hawkeyes at Top 5 teams in the nation, as the Big Ten amazingly has two representatives without Ohio State in the picture.

We've seen some major defensive clashes in the conference already this year and with a total of 41.5 on the college football betting board here, oddsmakers believe another is in store.

Find out if that will prove correct with our free Penn State vs. Iowa picks and predictions, with kickoff on October 9.

The Hawkeyes opened as a 2.5-point favorite and still remain there at most outlets. A couple sportsbooks are listing Iowa as a 2-point favorite, so make sure to shop around if you’re looking to bet the Hawkeyes. Meanwhile, the total opened at 42.5 and has now dipped to 41.5. Use the live odds widget above to track any future line movements right up until kickoff and be sure to check out the full college football odds before placing your bets.

The Nittany Lions are 6-0 ATS in their last 6 conference games. Find more NCAA betting trends for Penn State vs. Iowa.

Context is important here, though, as both of these teams have only played ranked opponents in two of their five contests, so their schedules haven't been the most difficult. That said, Penn State and Iowa both ended up winning those games and are still undefeated going into this showdown.

Iowa is coming off a 51-14 win over Maryland as short favorites last Friday. Everything seemed to click in that road game and the Hawkeyes now have some real believers in them. The pass protection hasn’t been nearly as good as the Hawkeyes would’ve wanted by the time they reached the sixth game of the season but the run game has done wonders, averaging 126 yards per contest.

The reality is, Iowa’s defense has been so dominant that the offense hasn’t had to go off. The Hawkeyes average just 320 yards on offense per game with less than 200 yards in the passing game behind Spencer Petras.

Petras is more of a game manager than anything else. He’s thrown for just 943 yards in five games with seven touchdowns and one interception. He has improved compared to last season and is making better reads and throws. Still, he doesn’t have the playmaking talent that Penn State has on the offensive end.

Penn State is averaging nearly 100 more yards on offense per game than Iowa under Sean Clifford, who has thrown for 11 touchdowns and three interceptions along with 1336 yards.

Just like Iowa, the Penn State offense hasn’t had to go off, but it has been much more consistent than Iowa, especially in the passing game.

Both defenses are elite, but Penn State has the better offense and has protected Clifford better in the pocket this season. I’ll go with the underdog, on the road, with the points for this matchup.

I’m not confident in Iowa’s offense. Petras completed just 57.1 percent of his passes last season and threw five interceptions. While he has looked better this season — throwing for seven touchdowns, one interception, and completing 62 percent of passes — there is cause for concern going into this matchup behind an offensive line that grades poorly in pass protection.

Iowa and Penn State both have incredible secondaries but the Nittany Lions' pass rush should have more success against Iowa’s pass protection. That's going to prevent the Hawkeyes from scoring as many points as they have recently.

Can either one of these teams reach over 21 points in this one? I don’t think so. This game has more of a Wisconsin-Penn State feel (a 16-10 win for the Nittany Lions) and we're backing the Under, despite the total being just 41.5. 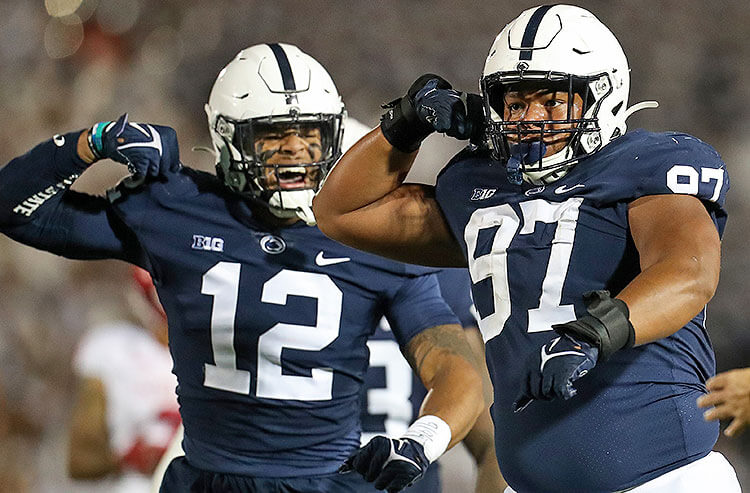