Auburn vs Arkansas Picks and Predictions: Tigers Too Fierce for Hogs

After a bright start, Arkansas has come back to reality in recent weeks. Against Top 25 Auburn, can the Razorbacks find a win? Find out with our college football betting picks.

For the 4-2 Razorbacks not all is lost after two straight losses, and that's because before the Aggies stunned the Tide in College Station, Texas A&M was losing at the hands of the Arkansas Razorbacks.

Though that win shines brighter now, Arkansas must find a win and stop its skid against Auburn in an SEC matchup on Saturday. Find out if the Razorbacks can do just that with our Auburn vs. Arkansas picks and predictions.

Arkansas opened as a 3.5-point favorite and have been bet up to -5.5 at a couple books. The total has also adjusted from 52.5 to 53.5 with some books inflating the total to 54.5 after Arkansas put up 51 points on their own last week.

Razorbacks are 1-8-2 ATS in their last 11 games after scoring more than 40 points in their previous game. Find more NCAA betting trends for Auburn vs. Arkansas.

The fun for Arkansas is finally over. The Razorbacks won four straight games, and many believed the Razorbacks were for real this year. Instead, Arkansas ended up losing their last two games to Georgia and Ole Miss and looked terrible on the defensive end.

The Razorbacks lost to Georgia 37-0 and then responded with a 52-51 loss to Ole Miss. It was nice to see the offense regroup but the defense is clearly having problems as we approach midseason.

On the season, Arkansas has allowed 24.5 points per game with 337.5 yards. However, the coverage looked weak last week, and many tackles have been missed in the open field. The only area where Arkansas looks solid in is the pass rush, but that means nothing if the coverage can’t do their part.

Meanwhile, Auburn is allowing just 19.2 points per game and has lost two games to two Top-10 opponents. Auburn isn’t a Top-10 team but they’re easily in the Top 25. The production from Auburn’s defense is going unnoticed.

Auburn is allowing 320.7 yards per game and just under 105 yards per game on the ground. They’ve been an elite defense when it comes to rushing and they’ve also held opponents to just 216 yards passing per game.

If Arkansas struggles to run the football early, they’ll also struggle to pass the ball late. Auburn’s defense isn’t the Swiss cheese that Ole Miss was.

Any time I get the chance to take an under with this Auburn defense, I’m going to. Auburn’s defense has, again, allowed 19.2 points per game and have been elite in most categories this season.

Meanwhile, Arkansas is going to want to run the football and should struggle against a fantastic Auburn front seven that has stuffed the run in nearly every game this season.

If both teams decide to run, time will tick and the Under will hit. Arkansas’ defense, despite allowing plenty of points to Georgia and Ole Miss, has been solid. Before those games, the Razorbacks held Texas A&M to just 10 points and they also held Texas to 21 points (before Casey Thompson was named starter).

I’ll take the under in this SEC battle. Arkansas won’t be scoring near 50 points against any other SEC team this year. 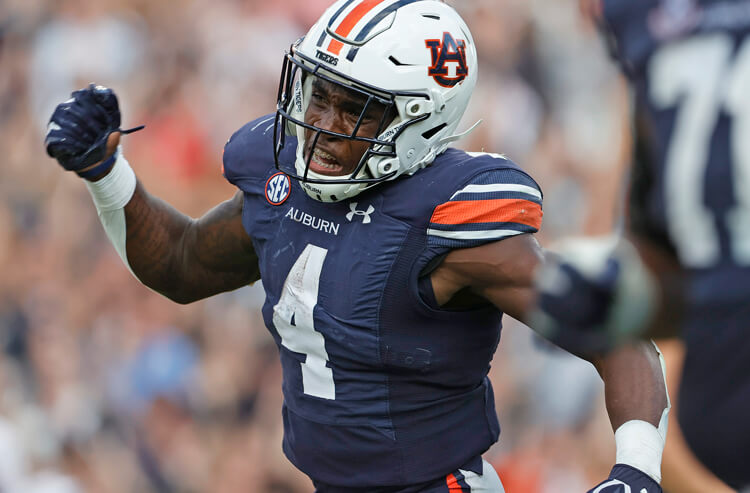 Auburn vs Arkansas Picks and Predictions: Tigers Too Fierce for Hogs
Provided by

Houston vs Cincinnati AAC Championship Picks and Predictions: Can Cincy Clinch?
Douglas Farmer | Dec 4, 2021
About Us
Contact Us
Careers
Our Team
Brand
Testimonials