Oklahoma State vs Texas Picks and Predictions: Longhorns Bounce Back From OU Loss By Beating OSU

Texas suffereda heartbreaker last week and will look to rebound against perfect Oklahoma State. Our college football betting picks look at if the favored Longhorns can knock off the undefeated Cowboys.

The Texas Longhorns will need to put a tough loss in the Red River Showdown behind them, as they host the Oklahoma State Cowboys in Austin on Saturday.

Despite sitting at a perfect 5-0, the Cowboys are college football betting underdogs visiting the 4-2 Longhorns.

Find out if Texas can get back in the win column with our free Oklahoma State vs. Texas picks and predictions.

Despite the fact that the Cowboys are the higher-ranked team in this game, the Longhorns opened as 5-point favorites and have moved up to 5.5-point favorites at most books at the time of writing. Meanwhile, the total opened at 60.5 in this game and has since ticked down a half-point to 60 at most books. Use the live odds widget above to track any future line movements right up until kickoff and be sure to check out the full college football odds before placing your bets.

Texas is 6-1 ATS in its last seven games as a favorite. Find more NCAA betting trends for Oklahoma State vs. Texas.

Last week, the Longhorns got off to a flawless start against the Sooners — jumping out to a 28-7 first-quarter lead — but were unable to finish the job. Oklahoma made a change at quarterback that completely energized the team and Texas ultimately suffered one of the biggest collapses we’ve seen this season.

The Longhorns must now prove that they are capable of making that loss a thing of the past. The fact that they now face an undefeated Oklahoma State team should help, as Steve Sarkisian’s group will be hungry to deal the Cowboys their first loss of the season.

Oklahoma State has had a great season thus far but the team’s offense is nowhere near as good as some of the ones Mike Gundy has fielded in the past. The Cowboys are averaging only 25.4 points per game on the year, which would be the weakest offense this program has had since 2015. And while that says a lot about how good this Oklahoma State defense has been — only 23 teams are allowing fewer points per game this season — it’s also a potential dealbreaker as far as beating this Texas team goes.

After putting up 48 points in a loss to Oklahoma last week, Texas is now fifth in the nation in scoring at 44.5 points per game. This Longhorns' offense has gone to another level since Sarkisian opted to make Casey Thompson the team’s starting quarterback, as the junior's ability to run the ball gives Texas a whole other dimension compared to Hudson Card — and Thompson has also thrown the ball better than Card did.

With an explosive passing game now part of Texas’ offering, teams are having an even harder time defending star running back Bijan Robinson. Robinson rushed for 137 yards and a touchdown against Oklahoma, and that performance followed up one in which he rushed for 216 yards and two scores against TCU.

Overall, the Cowboys might be a good defensive team but an elite college offense normally beats a good defense and that’s exactly what the Longhorns have. Meanwhile, Texas’ defense might not be anything special but the team is capable of avoiding huge plays from an offense that hasn’t had many of them this year.

Last game, quarterback Spencer Sanders had just one touchdown and three interceptions in an Oklahoma State win over the Baylor Bears. That type of outing might cut it against Baylor, but it won’t be enough against Texas. This has the potential to be a beatdown.

The total in this game has gone down a tick since it became available, despite the fact that the consensus seems to be rolling with the Over. That could mean that the sharp money is coming in on the Under, and it’s understandable why it would be.

While the Cowboys won’t have much of a chance of winning this game, they are going to do what they can to muck it up and try to get the Longhorns to play their style. Ultimately, Oklahoma State won’t be able to win that battle, as Texas’ offense is too explosive to be held down for that long.

However, it’s still not likely that this will turn into a shootout because of the way the Cowboys play, and the Longhorns are capable of winning this game convincingly while also hitting the Under.

It’s also worth noting that the Under is 11-3 when Oklahoma State has played as a road underdog of 3.5-7 points under Gundy. The Under has also hit in five of the last eight meetings between these two teams. 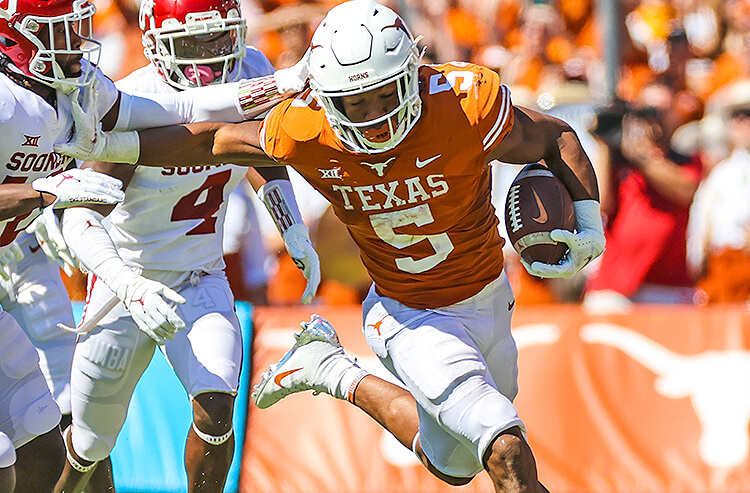 Oklahoma State vs Texas Picks and Predictions: Longhorns Bounce Back From OU Loss By Beating OSU
Provided by