Alabama vs Georgia Same-Game Parlays For The CFP Championship: Whose Tide Will Turn?

With the highly anticipated rematch between Alabama and Georgia on Monday, we have a few same-game parlays for your enjoyment on tap. The National Championship is up for grabs, and Jameson Williams or Brock Bowers could be the linchpin in a successful SGP. 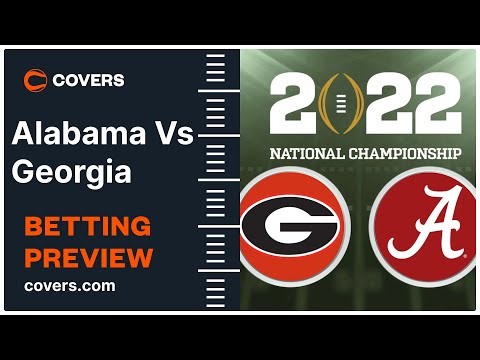 The end of the college football season is here. We wish it wasn’t as much as you do, but we also can’t wait for the delight that should be this Alabama-Georgia rematch. Some of us have futures bets placed in August still on this game. Some also see that field-goal spread and have a quick bit of confidence.

For the rest of us, there is fun to be had via same-game parlays. Let’s be clear from the outset, though. Same-game parlays should be looked at strictly as fun. Sportsbooks lower the payouts to such an extreme, citing the correlation inherent to a same-game parlay, that the expected value on these parlays skews negative.

For example, the Alabama-leaning same-game parlay below pays out at +1,503 via FanDuel, but in a normal parlay, those three odds would build to odds of +2,847. The correlation of the bets probably does not warrant a payout cut by nearly half.

Before we get into the content of some same-game parlay thoughts, let’s emphasize one more time: These are for fun. These will make your Monday night more entertaining. Hopefully one cashes. But same-game parlays should not be crucial to your long-term betting strategies.

Now then, our same-game parlay suggestions for the College Football Playoff championship game between Alabama and Georgia on Monday, January 10, with kickoff set for 8:05 p.m. ET.

For the Alabama backers:

Alabama’s passing game relied on two threats this season, and suddenly John Metchie is no longer available. That leaves only Jameson Williams. Alabama did not need to lean on him against Cincinnati, electing instead to run the ball extensively, so he ended up with only 62 yards on seven catches, but do not let that fool you.

If Alabama is going to win on Monday, it will need to lean on Williams, just as it did in the SEC championship game when he finished with seven catches for 184 yards and two touchdowns. In the Tide’s toughest games this season, it was usually Williams who shined. In the loss to Texas A&M and the pair of one-possession victories against LSU and Arkansas, Williams totaled 496 receiving yards and six touchdowns on 28 catches. And all that was with Metchie around. Now his 7.4 catches per game need to be spread around, and Williams is the likely beneficiary.

Some books may offer a longest touchdown prop, and if able to include that to the tune of anything under 50 yards, it would fit well with a Williams anytime touchdown. Of his 15 touchdowns this season, eight were longer than 50-yard scores, including five that went beyond 60 yards. Williams is not a distinct red-zone target for quarterback Bryce Young. Inside the 20, either Robinson or even Young is more likely to tout the ball across the goal line.

A deep shot to Williams should pay off if this game opens up in the second half, which would also help propel Alabama toward more than 24 points.

In the four matchups between these two during Kirby Smart’s time leading Georgia, they have combined to average 60.5 points per game. The Tide has scored 35 or more in each of their last three meetings. The Dawgs defense forces Alabama to open things up even more than usual in the post-Lane Kiffin era.

That offense still starts slowly often enough, though. Alabama trailed at halftime twice this season — the loss to Texas A&M and the overtime affair at Auburn — and trailed after the first quarter against Tennessee, LSU, and Georgia. The Dawgs, meanwhile, did not trail at halftime until the SEC championship game, and Georgia had a 10-0 lead early in the second quarter.

Aside from trailing 24-17 at halftime of that tilt a few weeks ago, the Dawgs gave up 32 total points in 13 first halves this season. That includes a few notable common opponents, namely Tennessee, Auburn, and Arkansas.

Furthermore, Georgia led at halftime in the first three meetings between Smart and Nick Saban. If Alabama wins yet another national championship, it will likely do so by coming from behind.

If you're signing up for a new sportsbook for the CFP National Championship, here are two of the best welcome bonuses available:

For the Bulldogs faithful...

Let’s again start with Georgia’s first touchdown, and there is only one real option with the Dawgs. Freshman tight end Brock Bowers may have “only” 12 receiving touchdowns this season, but that includes six touchdowns in the last four games. Understandably so, being a true freshman, Bowers came on gradually this season. In the last three games, he caught 18 passes for 294 yards, including 10 receptions for 139 yards and a touchdown in the SEC championship game. The Tide had no answer for Bowers.

It was not the first time a Georgia tight end flummoxed a Saban defense. Isaac Nauta caught four passes for 81 yards and a touchdown in the 2018 SEC championship game, nearly pushing the Dawgs into the Playoff before a Jalen Hurts-led comeback.

Bowers will bother Alabama at some point Monday night. Few things feel more inevitable heading into this title tilt. In a game featuring two dozen future pros, Bowers is the one who could probably suit up in this year’s NFL playoffs and make some impact.

As discussed above, Georgia has not struggled early in games this season, not at all. At some point in every first half, it put its opponents on its heels. Trailing Alabama at halftime twice would be a shock, especially since the first occurrence needed a blown coverage from the Dawgs secondary, as well as their offense to completely stall for most of a quarter.

Then adding the Georgia-Georgia double result may seem repetitive, but it is an effort to avoid other traps. If the Dawgs win their first national championship in 40 years, this may well look like their dominance all season, and that would run counter to the inclination of playing the Over 52.5.

Frankly, the double result offers a chance to include the Georgia money line but at a positive return. That opportunity is a hard one to turn down.

Alabama vs Georgia Same-Game Parlays For The CFP Championship: Whose Tide Will Turn?
Provided by