Despite suffering its second loss of the season over the weekend, Clemson remains the team to beat in the ACC with UNC the last team standing in its way. We break it all down in our full ACC championship odds below.

The Atlantic Coast Conference saw some upheaval in 2021 with Pittsburgh emerging as champion after defeating Wake Forest, marking the first time since 2014 that a program other than Clemson won the conference.

However, the ACC has returned to its regularly-scheduled programming with the Clemson Tigers now favored over North Carolina in this year's championship game.

Here are the latest college football odds to win the 2022 ACC championship.

Odds to win the ACC championship

Favorites to win the ACC championship

Despite a couple of pretty ugly defeats to Notre Dame and South Carolina this season, Clemson consistently remained the team to beat in the ACC.

The Tigers locked in the top spot in the ACC Atlantic a few weeks ago and secured their spot in the title game with North Carolina in what projects to be a matchup of offense vs. defense.

The aforementioned North Carolina Tar Heels also secured their spot in the title game after an impressive road win at Wake Forest in Week 11.

And while they've lost back-to-back games to Georgia Tech and NC State since then, the Tar Heels can put the finishing touches on an encouraging season with an upset victory this weekend.

During the offseason and preseason, you'll be able to get a plus-money price on basically any team in the nation as there is so much uncertainty around what will happen next year.

NCAA football championship odds will usually look like this:

This means that on a $100 bet, you'll stand to win $125 if the Crimson Tide win the national title. If it's close to the end of the regular season and there is a particularly dominant program, you might see that a team is has a minus sign (-) ahead of its odds.

This means that if you bet on Georgia you would need to bet $145 to profit $100 if the Bulldogs won the championship.

Of course, futures odds are a fluid market. They can change every day based on news, injuries, suspensions, transfers, etc. In college football there generally isn't too much movement in the futures market during the offseason, but once the season begins, look for huge changes week-to-week based on wins and losses.

All the odds seen above are in American format. Should you find decimal format or fractional format easier to read, simply convert the odds with our easy-to-use odds converter tool.

Clemson is the odds-on favorite to win the ACC in 2022, followed by Miami, NC State, and Pittsburgh.

Clemson has 20 ACC championships, followed by Florida State with 15, then Maryland with nine. 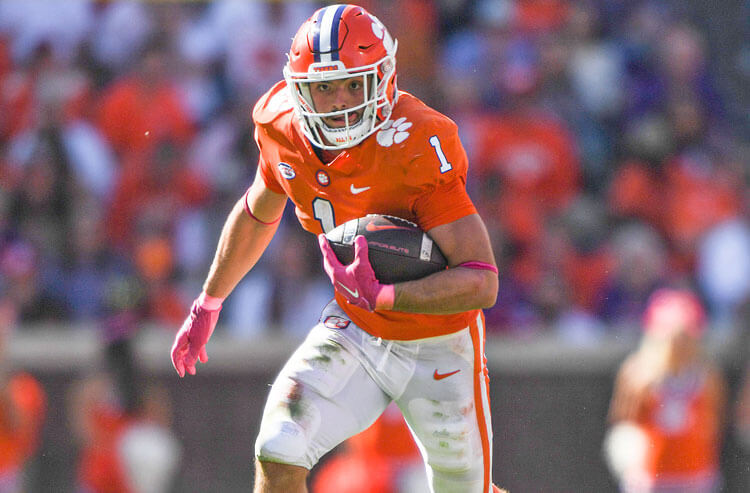